The Bank of Greece will issue, on the 19th March, new collector coins which mark one of the country’s oldest entities in terms of banking and savings. Initially founded in 1839 as the Consignment Deposit Loan Fund, it was one of the first financial authorities established by law, eight years after attaining recognised independence from the Ottoman Empire. Since that time, the Consignment Depositary Loans fund has grown into a self-managed financial, managing, regional, and private entity with its own property risk and loyalty under the supervision of the Hellenic Treasury. After 1927, and the founding of the Bank of Greece, it was supervised for activities that fall within its remit. Because the CDLF does not participate in the interbank market, its assets are required to be deposited with the Central Bank. The purpose of its foundation was the exclusive custody and management of all kinds of public savings and loan businesses.

In 1919, after the conclusion of the fighting in Europe during the Great War, the name was amended to remove the word “consignment.” Running parallel with the development of the state and national economy, the Deposits and Loans Fund (DLF) has developed other activities, mainly in the field of capital management of various government entities. The contribution of the Deposits and Loans Fund includes essentially three distinct phases of participation in the country’s development effort.

The first phase ran from its establishment in the 19th century, and, in particular, from 1925 to the Second World War, is characterised by a particular dynamism in the granting of loans for the performance of public utilities.

The emblem of the DLF.

The second phase ran from the end of the war until the early 1980s, and despite the unfavourable position of the war resulting in the loss of most of the capital reserves, it was characterised by an attempt to reshape available funds and extend its responsibilities to young people in areas showing the greatest prospects. During this time, the accumulation of significant funds allowed the DLF to provide significant loans to both civil servants for their housing needs and to local authorities for all kinds of utilities.

The last phase, from the 1980s to the present, was characterised by the development of new institutions in the area of local government, and the DLF played a leading role in this context. At the same time, in preparation for the adoption of the euro single currency in 1999 and its launch in 2002, the DLF took initiatives that strengthened their orientation into the euro-system of banks overseen by the European Central Bank. The DLF was especially crucial for the reconstruction of Kalamata after the earthquake of 1986 as they were able to initiate billions of euros in loans at different times with the European Investment Bank. In recent years, the DLF has been supporting the local government initiatives to carry out development projects and have restructured its loans to enhance their liquidity.

The Brilliant Uncirculated quality coins are produced by the Hellenic State Mint at their facilities in Athens on behalf of the Bank of Greece. The obverse design recreates the original and still-current emblem of the DLF, a stylised image of a griffin, a legendary creature with the body, tail, and head of a lion, along with horns, wings, and an eagle’s talons as its front feet. The figure is standing on a sheaf of wheat, and below the primary design is the inscription 100 ΧΡΟΝΙΑ ΤΑΜΕΊΟ ΠΑΡΑΚΑΤΑΘΗΚΏΝ ΚΑΙ ΔΑΝΕΊΩΝ (“100 years of Deposits and Loans Fund”). Above the inscription is the year of issue and mintmark of the Greek Mint. The overall design is surrounded by a composite of lines and representations of wheat stalks. The reverse side also includes the greater design of those wheat stalks and lines. In the centre is the insignia of the Hellenic Republic along with the coin’s denomination of 5 EYPΩ. 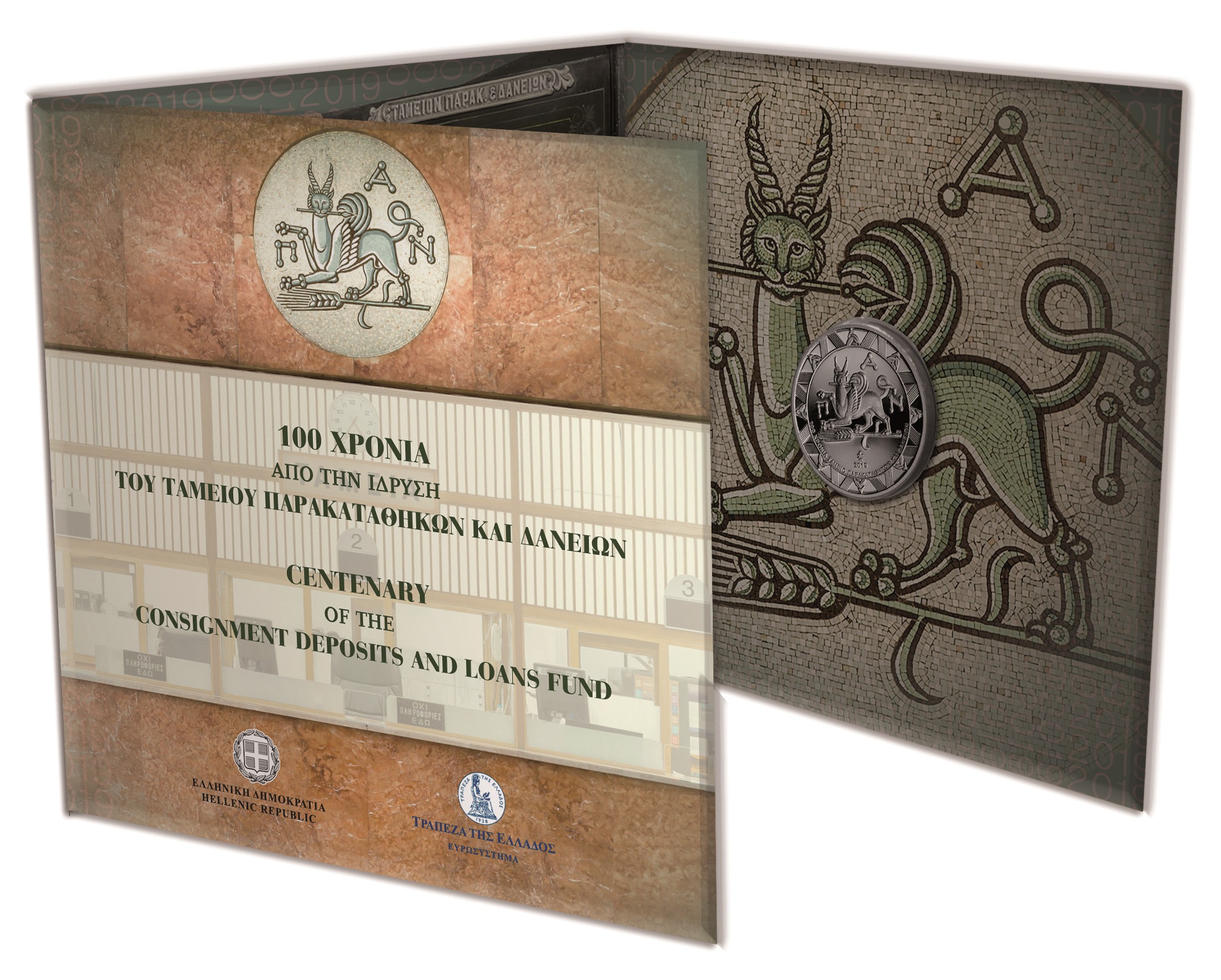 The coin is presented in a colourful blister-pak type folder that includes background information and history about the Deposits and Loan Fund. Collectors residing in Greece may visit the Bank of Greece in Athens to purchase coins over the counter. Those outside Greece can e-mail a request to the following mailing address: .