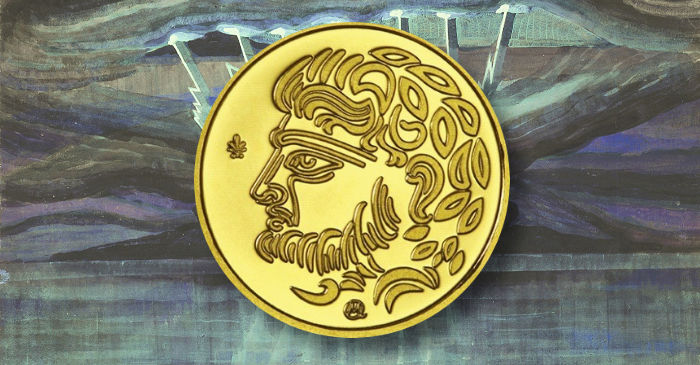 The Bank of Greece has announced that they will issue, on the 8th October, their last gold collector coin for the year which is part of their series entitled “Cultural Heritage,” that highlights the Temple of Poseidon at Sounion.

Cape Sounion is one of the most iconic landmarks of Attica and is also closely associated with Athenian mythology in particular. According to legend, this is where king Aegeus leapt to his death, mistakenly believing that his son Theseus had perished in Crete. The most important monument at Sounion is the Doric temple of Poseidon, built from locally quarried marble around 444-440 BC. The temple was a magnificent structure with its 34 columns, of which only 15 of them still stand today. It is most probably the work of the same architect who designed the Theseum, the Temple of Ares in Acharnae and the Temple of Nemesis in Rhamnous, as there are strong similarities between the four temples.

The temple featured a frieze depicting the Battle of the Centaurs, the Battle of the Giants, and the labours of Theseus. Owing to its spectacular position, the temple has been admired and repeatedly painted and photographed, continuing to attract tens of thousands of visitors every year.

The gold Proof-quality coins are produced by the Hellenic State Mint at their facilities in Athens, on behalf of the Bank of Greece, and are designed by M. Antonatou. The obverse depicts the sea god Poseidon in a stylised effigy that is created out of elements of wave and shapes of water. The mintmark of the Greek State Mint is placed just to the left of the portrait. The insignia of the artist — a capital M — is placed into a lowercase “a” below the rendition of Poseidon.

The reverse side includes the depiction of the Temple of Poseidon at Sounion as a silhouette, a very recognisable sight for many. The text in Greek ΣΟΥΝΙΟ (Sounion) is placed in a slight arch above the primary design. In the middle of this depiction is the Greek crest with the text ΕΛΛΗΝΙΚΉ ΔΗΜΟΚΡΑΤΊΑ (Hellenic Republic), seen encircling the crest. The denomination of 50 EYPΩ is placed below the temple and is superimposed over a series of waves depicting the shore.

The Proof quality gold coins will officially be released on the 8th October. Each coin is encapsulated and presented in a custom case and is accompanied by a numbered certificate of authenticity. Interested collectors can inquire about purchases by visiting the dedicated website of the Bank of Greece. Order forms can be downloaded from this website.