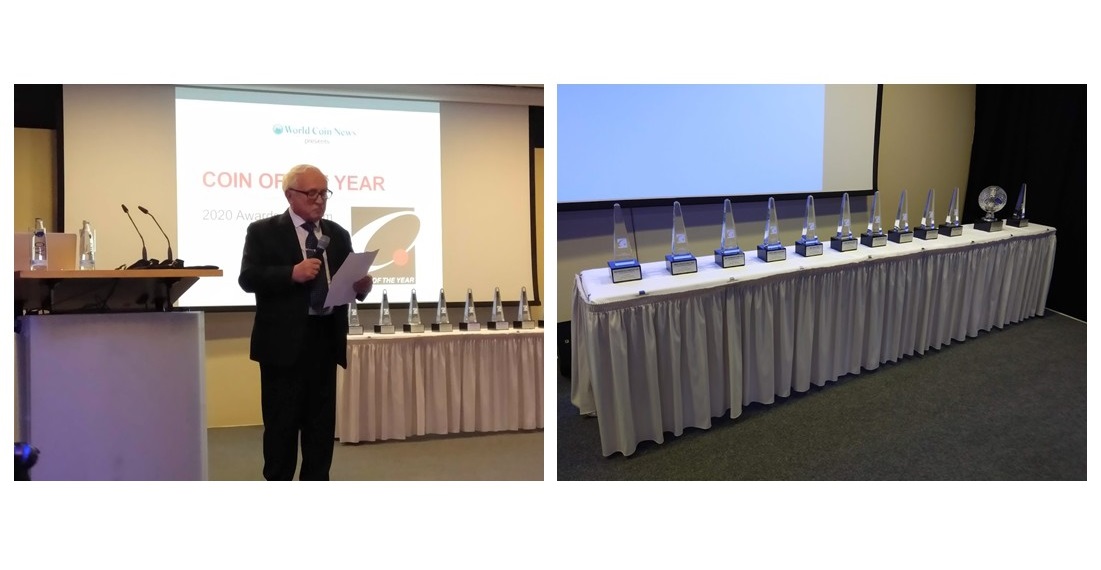 The awards are opened by the World Money Fair’s honourary and lifetime president, Dr. Albert Beck. Hover to zoom.

The 2020 Coin of the Year Awards, colloquially known as the COTYs, got off to a great start this year as various mints and other recipients gathered during the 49th World Money Fair. Held in Berlin’s purpose-built Estrel Convention Centre since 2006, the greatly anticipated awards, now in its 37th year, were presented for the first time by Active Interest Media (AIM), successors to FW Media, former parent Company to Krause Publications Numismatics. The awards are also co-sponsored by the organisers of the World Money Fair and the Journal of East Asian Numismatists, who, this year published the first “Chinese Show Panda Catalogue,” which was on offer during the World Money Fair.

The event was opened this year by the World Money Fair’s current acting director and honourary lifetime president, Dr. Albert Beck, who handed over the award ceremony over to Presenter Thomas Michael, senior editor of AIM. The presentation began with the first of the 10 categories, commencing with “Most Historically Significant Coin” and the Monnaie de Paris scooping this accolade for their 2018-dated €10 silver Proof and colour “Great War — Peace” issue.

Following on, the next award in the “Best Circulating Coin” category went deservedly to the Mint of Austria for their beautifully designed two-euro coin marking the centenary of the Austrian Republic.

IPZC Mint Director Antonio Cascelli heads the Italian contingent to accept their award (right) while Janis Blums of the Bank of Latvia accepts the first of their two awards on the day, the second being for the ultimate Coin of the Year.

In the “Best Contemporary Event” category, it was the turn of the IPZS, Italy’s state Minting facility, to accept this award for their 2018-dated silver and Proof colour coin marking the 70th anniversary of the republic’s constitution.

Austria’s representatives were asked back onto the stage once again to accept the award in the category of “Best Bi-Metallic Coin” for their silver and niobium Proof coin entitled “Anthropocene,” the niobium and silver coin issues being a firm favourite with collectors.

The category for “Best Gold Coin” was also garnished by the Mint of Austria. Their representatives, the CEO of the Mint of Austria Gerhard Starsich and Marketing and Sales Consultant Andrea Lang, simply stepped to the side before accepting their third award during the presentation. Their release in an on-going series entitled “Vienna Schools of Psychotherapy,” the coin featured an image of Psychoanalyst Alfred Adler.

Mr. Janis Blums of the Bank of Latvia accepts the trophy for this year’s Coin of the Year. The award was later displayed at the Bank of Latvia’s pavilion at the World Money Fair. (Right) Ms. Henna Karjalainen of the Mint of Finland stands next to AIM Editor Thomas Michael as she accepts the award of lifetime achievement on behalf of her esteemed colleague coin and medal designer Reijo Paavilainen.

In the category of “Most Artistic Coin,” Thomas Michael commented that the result was almost unanimous with the judges for Latvia’s 2018-dated homage to honey producers and the golden agricultural product itself.

It wasn’t just the Baltic State of Latvia to be honoured at this year’s awards; it was the turn of neighbouring country Lithuania to be recognised for numismatic excellence. In the category “Best Silver Coin,” their 2018-dated five-euro release saluting traditional Lithuanian celebrations is part of an ongoing series.

As with the Mint of Austria, Lithuania’s representatives from both the Lithuanian Mint and the Bank of Lithuania remained just off-stage until it was time for the award for “Most Innovative Coin.” The coin released for Lithuania’s centenary of independence, a four-piece design struck in silver, was highlighted in this instance.

Ms. Audrone Gruodyte of the Bank of Lithuania (left) heads her country’s representatives as they receive the award for Best Silver Coin. (Right) Dr. Prabir De accepts the award for Best Crown Coin on behalf of the Royal Australian Mint. Standing to his right is Editor and Presenter Thomas Michael, and to Dr. De’s left is Maggie Judkins, AIM media consultant.

One of the crowd’s (and collectors’) favourite categories, that of “Best Crown Coin,” was awarded to the Royal Australian Mint for their beautiful colour and concaved Proof silver coins issued as part of their “Earth and Beyond” series.

Ending the individual categories, “Most Inspirational Coin” was awarded to the Perth Mint for their silver one-dollar Proof releases honouring the centenary anniversary of the end of the First World War.

With all 10 of the categories represented and coins honoured, it was time to highlight the one single coin from all of those winners who were included in this year’s recipients. For many, the choice was easy as Latvia’s “Honey Coin” was considered the stand-out star of the show.

A group photo of some of the day’s winners as they proudly display their trophies to the attending media. The table of those awards to be given out during the ceremony, the distinctive COTY award, is seen second from the right.

A special award, which is presented towards the end of the presentation, is that of the Lifetime Achievement Award, which recognises a significant contribution to the numismatic field. This year’s recipient was one of the industry’s more prolific coin and medal designers connected to the coins produced by the Mint of Finland. Reijo Paavilainen’s many years of work with the Bank of Finland and Mint of Finland was recognised during this year’s COTY awards. Citing health reasons, he was unable to accept the award personally. His colleague Henna Karjalainen, Vice President of Communications for the Mint of Finland, accepted the award on Reijo’s behalf and read out his acceptance comments.

The COTY awards are an annual presentation which recognises the year’s highest achievements in numismatic design, artistic vision, concept, technical production, and craftsmanship. The coins are nominated by private individuals, mints, and central banks, while an international expert panel of judges decides the final list. The honour of “Coin of the Year” is also symbolic of great accomplishment and recognition of numismatic creation. The 2020 COTY event honoured coins released during 2018. Many of those coins included as nominations in the awards were also prominently featured in articles published on Coin Update and World Mint News Blog.

The 38th presentation of the COTYs will take place during the World Money Fair, which will be celebrating its 50th anniversary, and is scheduled for the 30th January 2021. The event will feature the coins issued during 2019.

Photos courtesy of Michael Alexander, LBMRC UK. My appreciation to Thomas Michael, senior editor, and Maggie Judkins, media consultant with AIM Active Interest Media, for their kind assistance on the day, it is greatly appreciated.