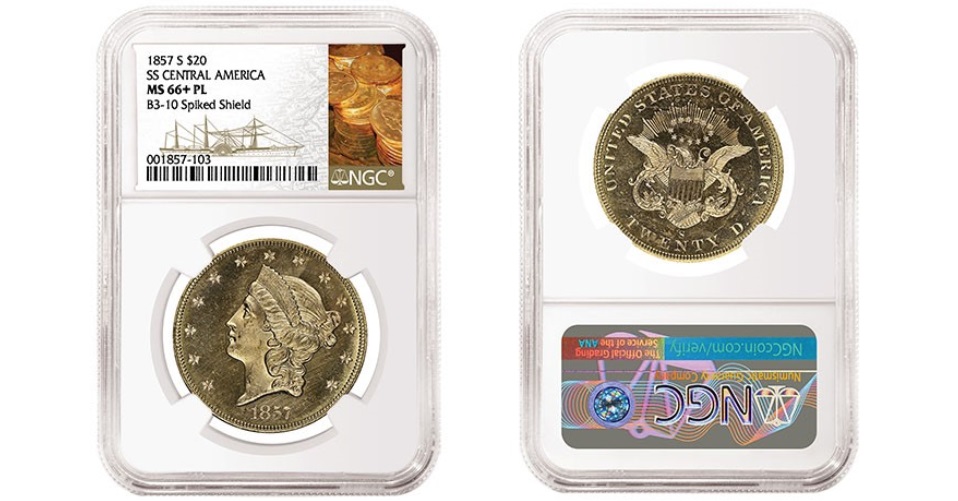 From the wreckage of the famous “Ship of Gold,” the 1857 Double Eagle is one of the top offerings in March from the respected online auction house.

Recovered from the famous shipwreck of the S.S. Central America, a well-preserved 1857-S Double Eagle, certified by Numismatic Guaranty Company (NGC), is one of the top coins in March being offered by GreatCollections. Online bidding is underway, with the sale ending on March 13, 2022.

Graded NGC MS-66+ PL, bidding for this Double Eagle had already surpassed $80,000 more than a week before the sale. It is one of the highest-graded examples from a group of 123 coins that were found in a box in the S.S. Central America wreckage and later certified by NGC. It is one of 10 examples from that group to earn NGC’s PL Designation for exhibiting Prooflike surfaces.

Over 160 years ago, the S.S. Central America was sailing toward New York to help alleviate the first economic crisis by delivering freshly minted coins and gold from California. The ship sank when it encountered a ferocious hurricane off the coast of the Carolinas. The precious cargo rested on the seafloor, lost for much of the history of the United States.

In the 1980s, the wreckage was found. Among the treasures recovered was the box of 123 gold coins. To find out more about the history of the shipwreck and a behind-the-scenes look at the coins’ journey to NGC, click here. To view a gallery of the group of 123 NGC-certified coins recovered from the S.S. Central America, click here.