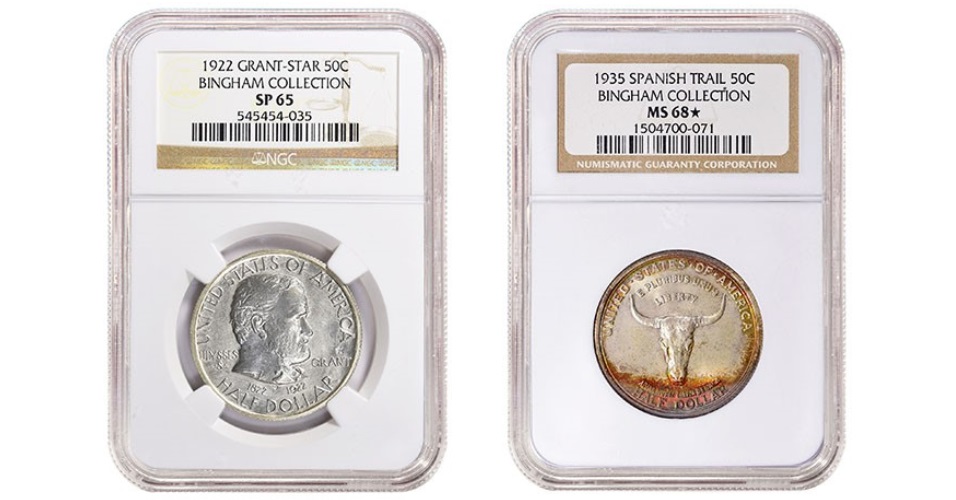 They include a rare Specimen and 18 coins that earned NGC’s coveted Star Designation.

Dozens of stunning classic silver commemoratives certified by Numismatic Guaranty Company (NGC) are being offered this month by online auction house GreatCollections. The coins are from the impressive collection of former NFL star Gregg Bingham. Depending on the lot, bidding ends on June 12, 19, or 26, 2022.

A top offering from the collection is a 1922 Grant-Star half dollar commemorative graded NGC SP-65. Issued for the centennial of President Ulysses S. Grant’s birth, most of these coins were struck without a star above the word GRANT on the obverse, so the Star variety carries a significant numismatic premium. Adding to its rarity, this particular example is one of only four in the NGC Census that have been certified as a Specimen, indicating it was struck using early-state dies.

Among the Bingham Collection offerings are 18 coins that earned NGC’s Star Designation (★) for exceptional eye appeal. These include a 1935 Spanish Trail half dollar commemorative graded NGC MS-68★, which is unsurpassed in the NGC Census.

Other NGC-graded highlights from the Bingham Collection being offered include:

Two NGC-certified vintage U.S. coins offered by GreatCollections could sell for over $100,000