Shortly after finding out that I am a rare coin dealer; new acquaintances will often begin to ask about coin collecting. One of the first questions many people ask – What is the most expensive coin? Most are astounded when told that a 1933 Double Eagle sold at auction for over $7,000,000 several years ago. They usually then ask how can a coin be worth so much. The short answer is “The Story”. It was because of questions like this, that several years ago I authored the very popular 100 Greatest U.S. Coins. The book is now in its fourth edition. For nearly every coin in the book, it is the story that makes it great! The 1933 Double Eagle is a prime example. How many coins have been spirited from the Mint, owned by Royalty, confiscated by the Secret Service, been the target of a sting operation, and the center of a decade long legal battle. The final chapter of this great coin has not even been written yet! 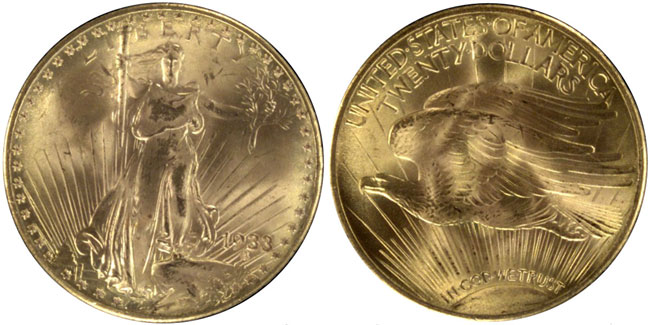 There a many, many coins in the United States series, that are very rare, but lack a compelling story to make them highly desirable. On the other hand there are quite a few coins that are relatively common, but find themselves on the want list of most serious collectors. The 1907 High Relief Double Eagle is a good example. The coin was saved by the thousands, and can be found in quantity at nearly every coin show. I have personally handled hundreds of examples over the years. The 1907 High Relief Double Eagle is highly sought after because of its great story and incredible beauty. The President of the United States, Teddy Roosevelt, commissioned the nation’s greatest artist to redesign the Cent, Ten Dollar, and Twenty Dollar coinage. The United States Mint struggled mightily to bring the artistic genius of Augustus St. Gaudens to reality. The final result is one the most beautiful coins ever produced.

Coins have often been referred to as “History in your Hands”. Old coins were objects of value, and they were seldom discarded. Although most were melted and recoined, some managed to survive, enabling their new owners to appreciate and to better understand the society they served. Many of the most historic events in human history can found on a nations coinage. Greek gods and Roman conquerors are immortalized on some of the earliest coinage struck. Roman Emperors used coins for propaganda. One can easily trace the advance of civilization though coinage.

The history of the United States is very clearly illustrated by its coinage. From the 1652 Pine Tree Shilling struck in colony Massachusetts to the 1792 Half Disme said to be struck from Martha Washington’s silverware, coins are a tangible link to the formation of our nation. The early monetary system of the United States was closely tied to its coinage. This was before paper money, and at a time when a silver dollar had a dollars worth of silver. What a concept! The expansion of the United States is also easily found through rare coins. With the discovery of gold in California, the gold dollar and double eagle came into being. Even today, coins play an important part commemorating our nation’s history. Every year several interesting commemorative coins are produced to mark important events from the past.

Interestingly, even common coins can sometimes become very desirable because of the story attached to them. Some great example of this are the many shipwreck coins that have been found over the years. Coins from the S.S. Central America, S.S. New York, S.S. Republic, and the S.S. Yankee Blade are all highly sought after. Decades later, collectors are still excited when told of the vast treasure found by Mel Fisher when he discovered the Atohca off the coast of Florida. Other great hoards that collectors clamor for include the Redfield Silver Dollars, the GSA Carson City Silver Dollars, and the Wells Fargo double eagles.

A coins pedigree can also have an important impact on its value. Many collectors would much rather own a coin that was once part of famous collection. Early large cent collectors carefully study the pedigree of almost every important large cent offered. Coins with such illustrious pedigrees as Clapp, Eliasberg, Ford, Pittman, Bass, etc. will always bring more than coins with little or no history. Many great collections are being formed today, and in the future coins from these collections will undoubtedly bring a premium.

It is not difficult to understand how a compelling story can make a coin so desirable. This can be important knowledge when making a purchase decision. Remember, the value of a coin is much more than rarity and condition. It is my guess that in the future, coins with a great story will always be the most sought after!