The Great Smoky Mountains National Park, located on the Tennessee-North Carolina border, was originally chartered by the U.S. Congress in 1934, and was dedicated by President Franklin Delano Roosevelt in 1940. Its namesake mountain range is part of the Blue Ridge Mountains, which in turn is a division of the Appalachian Mountain chain. The area was used in part as a set for the 1955 Disney movie, Davy Crockett, King of the Wild Frontier. 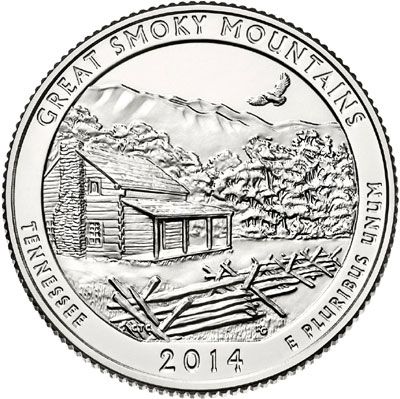 The 2014 Great Smoky Mountains National Park Quarter depicts a split-rail fence and a log cabin similar to those present in the park, set in front of a tree line at the foot of the mountain range. Also included in the design are the incused phrases “Great Smoky Mountains”, “Tennessee”, and “E Pluribus Unum”, as well as the date of issue. The coin will represent the first issue of the United States Mint’s America the Beautiful Quarters Program for 2014 and the twenty-first release within the program overall.

The Great Smoky Mountains quarter will be available from the U.S. Mint in the following products:

The United States Mint will join National Park Service officials and hundreds of local area school-aged children at 10:00 am on January 29, 2014, to launch the new quarter. The ceremony will take place at the Mills Auditorium – Gatlinburg Convention Center, 234 Historic Nature Trail, Gatlinburg, TN 37738. Following the ceremony, the public can exchange their currency for $10 rolls of new Great Smoky Mountains National Park Quarters.