On December 13, the Mint of Poland together with the National Bank of Poland launched their 2012 coin issues program with a bash. They organized a celebration for the first strikes of coins commemorating the “Great Orchestra of  Christmas” charity, an organization which raises money for underprivileged children nationwide.  The year 2012 is also the 20th anniversary of the charity, which is inscribed on the coins.

The silver heart-shaped coin is the first time that the National Bank has issued such an item and the first time they have teamed up with the well-loved charity to issue a coin in their honor.  In attendance was the chairman of the National Bank of Poland Mr. Marek Belka and founder of the Great Orchestra of Christmas charity, Mr. Jerzy Owsiak who struck the first coins. The National Bank have announced that these unusual coins will go on sale from the 1st January on a bidding basis with a special website offering details which went on-line during the day of launch.

The coin’s design is the work of Urszula Walerzak and includes the commemorative 20th year anniversary text along with a tree and heart flowers. The reverse depicts a piano keyboard cascading up and down the left side of the coin along with the emblem of Poland, the eagle and the coin’s face value of 10 Zlotych.

Struck in sterling silver to proof quality, the coin weighs 14.1 grams with dimensions of 28 / 30 mm. There is a total mintage authorized at 60,000 pieces. A 2 Zlotych circulation type coin struck in Nordic gold will also be available through commercial banks throughout Poland from the 5th January.

For more information on this and other coins issued from the National Bank, please visit their website at: http://www.nbp.pl/homen.aspx?f=/en/banknoty/kolekcjonerskie/2011.html 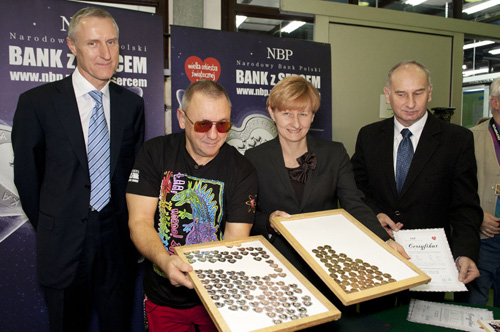