The Royal Canadian Mint have launched their second silver coin which highlights the five Great lakes in North America, and this series began last year with the first coin dedicated to Lake Superior. The Great Lakes situated between the countries of Canada and the United States are the world’s largest system of fresh surface water. Its five lakes, that of Superior, Huron, Michigan, Erie and Ontario – are visible from the moon and hold about 20 percent of the world’s freshwater supply.

The new coin highlights the smallest of the great lakes, that of Lake Ontario – and, as opposed to the lake being named in honor of the Province of Ontario – the province was named for the lake. In the Wyandot (Huron) language, ontarío means “Lake of Shining Waters”. Lake Ontario is the only one of the five Great Lakes not to share a shoreline with the state of Michigan and is the easternmost of the Great Lakes with the smallest in surface area at 7,340 sq. miles or 18,960 km. 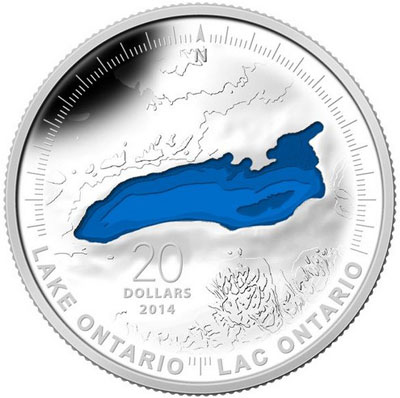 The coin’s reverse design includes an application as with the first coin – raised texture representing land against a translucent enamel filled lake. The coin includes an interpretation of the bathymetric depths below the lake surface based on data from the Canadian Hydrographic Service. The obverse features a portrait unique and distinct to the coins of Canada which was designed by Susanna Blunt and in use since 2003.