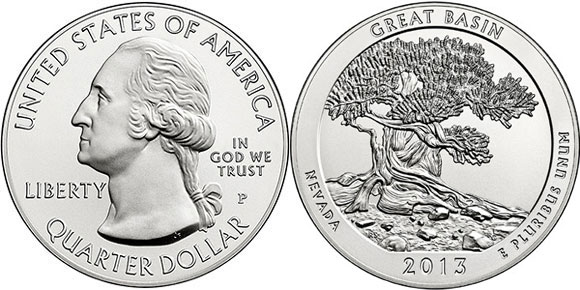 The reverse design of the coin features a Bristlecone pine in the rocky glacial moraines where the trees grow. Designed by Ronald D. Sanders and engraved by Renata Gordon, this striking image was chosen to be representative of Great Basin National Park.

The obverse of the coin contains the 1932 portrait of George Washington designed by John Flanagan. This image originally appeared on the Washington Quarter from 1932 to 1998 and in modified format for the State Quarters and D.C. & U.S. Territories Quarters issued from 1999 to 2009. A restored version of the original portrait was selected for use in the new America the Beautiful Quarters series.

Each coin is struck in 5.0 troy ounces of .999 fine silver with a diameter of 3.0 inches. The coins carry an uncirculated finish and bear the “P” mint mark on the obverse, representing the Philadelphia Mint.

The US Mint has indicated a maximum mintage of 25,000 pieces for the 2013-P Great Basin Five Ounce Silver Uncirculated Coin. Following newly established pricing for silver numismatic products, the coins are available for $154.95 each. As with other precious metals products, the price remains subject to potential change.

The next numismatic issue for the series will feature Ft. McHenry National Monument and Historic Shrine and is scheduled for release in August.