The Government of the Cook Islands have issued a new silver coin (double crown) which pays tribute to the 100th anniversary of the re-building of the terminal of Grand Central Station, New York City’s premier train terminal which has itself been referred to as the world’s loveliest station.

Grand Central Terminal, or station as it is usually called by locals, has undergone several refurbishments over its long history. Originally opened in 1871 during the height of rail travel and expansion in the mid to late 19th century, the new station is located at 42nd Street and Park Avenue. Grand Central Terminal is also the largest train station in the world by number of platforms which include 44 along with 67 tracks along them. The platforms are also on two levels, both below ground with 41 tracks on the upper level and 26 on the lower. The terminal covers an area of 48 acres in total. Grand Central Terminal is “the world’s number six most visited tourist attraction”, with approximately 21,600,000 visitors making a point to visit this extraordinary landmark annually. 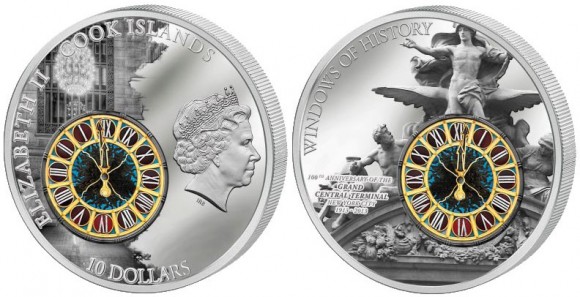 Struck by the Mint of Poland on behalf of the Cook Islands Government, The statue of Mercury which adorns the main entrance of the station and facing 42nd Street is beautifully re-created on the reverse of this silver coin, with the added enhancement of a stained glass piece where the clock would be. The obverse of the coin includes a fragment of the interior of the station which also includes one of the elaborate lighting chandeliers seen on the lower concourse of the new station which opened officially on the 2nd February 1913. A cameo portrait of HM Queen Elizabeth II is placed to the right of the interior scene and the coin’s denomination of $10 is just under the primary design along the lower edge.

For more information on this limited mintage tribute to Grand Central Station, please visit the website of the Polish Treasury Mint (commercial and sales division of the Mint of Poland) at: http://www.skarbiecmennicy.pl/10-grand-central-terminal-ag-2013.html Information is currently in Polish – orders are dispatched to European destinations.