The Grand Canyon National Park comprises over 1,900 square miles of unincorporated land in Arizona, most of which is the canyon itself. Created by erosion from the Colorado River over some 17 million years, it was known to the indigenous people of the area and was treated as a holy site.  The first European to discover the canyon was Garcia Lopez de Cardenas, who arrived in 1540 from Spain.  Its designation as a National Park in 1919 prevented development in the area, which would have included placing a dam across the river.  The U.S. government’s management of the park is complicated, having to balance wildlife issues, such as the reintroduction of the California condor to the area, with the noise pollution caused by overflight tours, as well as water right disputes with the Native American groups in the area. 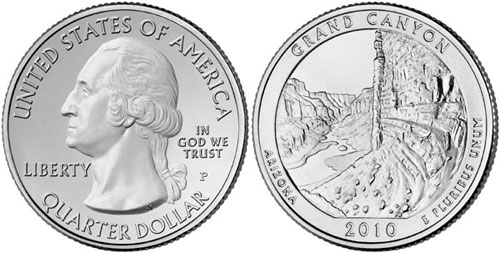 The Grand Canyon National Park Quarter reverse features a view of the granaries, used to store food and seeds 1,500 years ago, above the Nankoweap Delta in Marble Canyon near the Colorado River.  Also included in the design are the incused phrases “Grand Canyon”, “Arizona”, and “E Pluribus Unum”, as well as the date of issue. The coin will represent the fourth issue of the United States Mint’s America the Beautiful Quarters Program.

The circulation release date for the Grand Canyon Quarter will be September 20, 2010. The new quarters will also be available in the following U.S. Mint products:

A launch ceremony for the Grand Canyon National Park Quarter is scheduled to take place on September 21, 2010 at 1:30 PM MST, located at the park’s south rim, between Hopi House and Verkamp’s Visitor Center. A coin exchange will take place following the ceremony, where attendees can exchange currency for $10 rolls of the new quarters.

The evening before the launch, on September 20, 2010 at 5:00 PM, US Mint Director Edmund Moy will host a coin forum where the public may express their views on U.S. coinage and learn about current US Mint programs. The forum will be held at Grand Canyon Railway Depot, at the base of El Tovar Hill.