On December 7, 2014, the 22nd Grand Bourse will be held at Monaco, a coin show which attracts first and foremost dealers from France, Italy, and Spain – and collectors aiming for the latest issues of Monaco at their issue price.

Monaco, proud to have been in May the venue of the 2014 Meeting of the International Association of Professional Numismatists, will have the 22nd Grande Bourse in Fontvieille. Dealers and collectors will meet at Espace Léo Ferre, this romantic location high above the port.

Mainly French, Italian, and Spanish dealers visit the strategically located principality but word has also been spread to more distant countries that not only the Bourse of Monaco is worth visiting, in terms of numismatics, but that the winter is mild at the French Riviera and that festively illuminated Monte Carlo provides a wonderful setting for a long weekend in Advent. 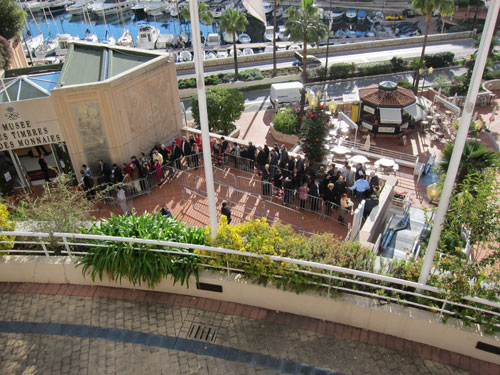 This particularly goes for a weekend that is filled with so many numismatic attractions like the one on December 6 and 7, 2014. It starts on Saturday, with the auction sale of Éditions V. Gadoury, where this time world coins and medals are preceded by superb Roman coins. On the next day the Grande Bourse will take place, and most visitors are highly likely to get up early due to the fact that it had become tradition for the Musée des Timbres et des Monnaies to offer one or two numismatic novelties at their issue price that very morning. After all, there is still no chance of buying coins from Monaco by submission and get them delivered by post. According to the official website, numismatic products with much lower editions depend on the palace. They decide whether an emission is going to be distributed via the Monégasque coin trade or whether attendants are permitted to acquire a specimen at its issue price at the Musée des Timbres et des Monnaies directly. Over the previous years it has become tradition that the Grande Bourse is accompanied by such a sale. This year probably will be no exception.

If you are already at the front gate of the Musée des Timbres et des Monnaies please make sure to go inside. Thanks to its marvelous collection of Monégasque coins it is worth visiting (of course, there are many stamps to view as well). This year’s exhibition will be dedicated to coins and medals produced on the occasion of a world and universal expos from 1851 onwards, as the organizers of the EXPO 2015 Milano will present their official souvenir medal project and will launch a new range of souvenir coin / medal at the show.

It goes without saying that Monaco is worth a visit in itself: think of the Casino of Monte Carlo, the Oceanographic Museum, the harbor with its huge yachts and – not to omit – La Turbie close beside it where Emperor Augustus had erected a monument in commemoration of the Alpine campaign of 15 B. C.