When dies for any coin are designed, every effort is taken not to have deep parts of the die(s), which create the high portions on a finished coin, directly opposite each other. A classic example of this design flaw is the 1921 Peace silver dollar. Struck in high relief, the central portion of both the obverse and reverse dies of this coin were opposite each other. That is why you will virtually never find a fully struck coin of this date. There will always be a weakness in the central portion of Liberty’s hair on the obverse and the leading or outer part of the eagle’s wing on the reverse.

When a coin is struck, the central areas of the die(s) are the last to fill, and if they are the deepest parts of the die(s), there is simply not enough metal in the planchet to adequately strike up the full design in those areas. This is also true on the Buffalo nickel. The area surrounding the tie on the braid is the central point on the obverse, and directly opposite this on the reverse is the “line” of raised fur on the bison’s back and the upper portion of the left leg. Thus, on a coin that is not fully struck, a weakness of varying clarity will manifest itself in these areas. 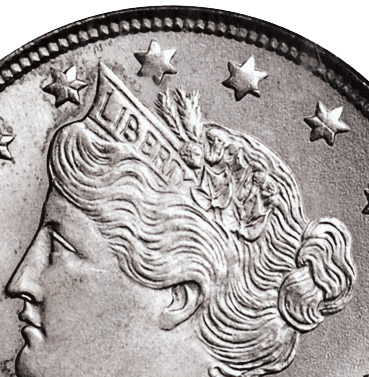 Flatly struck stars on the obverse of a 1901 Liberty Head nickel. As coins with Full Details exist, there is no need to buy one like this.

This design flaw, while not as severe as on the 1921 Peace dollar (which prompted a design change in 1922 to a much lower relief), is the reason only an extremely small percentage of the Buffalo series can be found with what may be considered a “full” strike. If I were to guess, I’d say that less than 2% of the entire mintage would be considered Full Details or completely detailed strikes; possibly 15 to 20% would fall into the “sharp” category (where the groove above the tie on the braid is easily visible); about 50% would be “typical,” and the remaining 30% would be “weak” strikes. 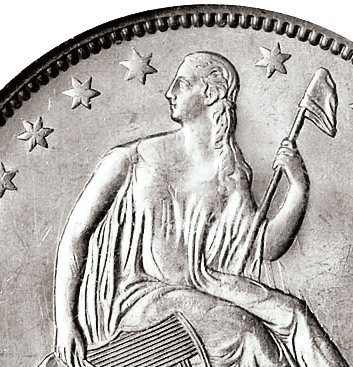 Flat stars to each side of the head of Miss Liberty on an 1858 Liberty Seated half dollar. Again, no need to compromise, as other coins with Full Details exist.

There are some dates that are exceptions to the above, due to fresh hubs and/or dies or a design change. The initial mintages of the 1913 Buffalo nickels are generally better strikes because of the newness of the hubs (a positive) and dies (a negative image). The 1921 Philadelphia and San Francisco Morgan dollar mintages were struck by redesigned dies and are usually either sharp or Full Details. For some reason the Mint reverted to the pre-1921 design after that one year.

It’s also good to keep in mind that the strike factor in the grading formula is an important component in determining the overall desirability of a coin, while it is not considered in arriving at a grade in technical grading. A connoisseur will often consider multiple factors such as luster, contact marks, and sharpness of strike, all of which combine to determine eye appeal.

This article is excerpted from Grading Coins by Photographs.