Whether you’re looking for dekadrachms of the highest quality, electrum fractions collected over decades, medieval denarii or modern Chinese commemorative coins – whatever your interest and budget, auctions 207 through 209 of Gorny & Mosch have something for everyone.

It’s almost that time again! The next Gorny & Mosch auction week gets underway on October 15, 2012, and the items coming up for sale in auction 207, “High-quality Ancient Coins,” are nothing if not impressive, to say the least. Collectors on a more limited budget, however, will likely find their prized piece in auction 208, “Ancient Coins and Lots.” And for the aficionado of medieval and modern coins, auction 209 in collaboration with pro aurum Numismatics, will be offering an extensive selection to choose from. This includes numerous individual pieces, plus collections from Poland, India, China and the USA. A total of 3868 lots will be up for sale, with an overall estimate of 4.6 million EUR.

You are invited to take part in this auction either in person, in writing, by telephone, or over the Internet. More information about how to bid is available at www.gmcoinart.de

It’s rare to see this many significant coins gathered together in one auction. Some of the most important showpieces come from the Matton Collection from the French Chateau d’Hauterive. These pieces were all privately collected from the 1960s through to the 1980s and truly attest to the collector’s uncompromising taste: fully centered, finely toned, and most of them in extremely fine condition, as well as being of the most superb die-cut. It’s a collection that would make even the most discerning of connoisseurs swoon.

There are too many pieces to mention here – the spectrum runs from a litra from Naxos, a masterpiece by the Aetna master, minted shortly after 461 (Estimate: 3,000 EUR) all the way through to a series of dekadrachms from the city of Syracuse, one of which is a splendid signed work of Cimon (Estimate: 100,000 EUR). Any series of coinage from Syracuse is mind-boggling to begin with; but it’s also exceedingly rare to see so many versions of Arethusa, the nymph of the spring, gathered together, and in lovely condition no less.

As distracting as the treasures of the Matton Collection may be, we can’t forget the other wonderful precious objects offered in auction 207. Take, for example, a stater of immense historical importance, one of Eunos, a Syrian slave who led the first slave uprising between the years of 135 and 132 in Sicily (Estimate: 8,000 EUR). There are other such gems to be found among the Greek coins as well, like an extremely rare stater of the Tyntenoi, a people whose contributions are mentioned in the Athenian tribute lists (Estimate: 10,000 EUR). 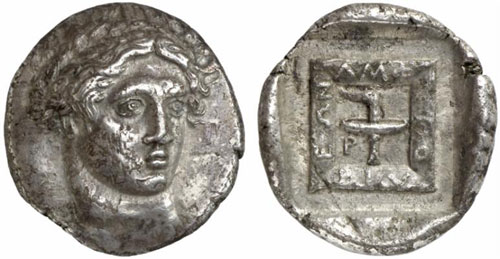 The tetradrachms of the city of Amphipolis are always a true aesthetic delight featuring the amazing facing designs of the head of Apollo. In auction 207, Gorny & Mosch is able to offer a piece of the superior quality die that was created for this exact series (Estimate: 80,000 EUR). The piece practically upstages two other rarities: two of the extremely rare issues of the Amphictyony of Delphi (Estimates: 25,000 and 10,000 EUR), who had them minted in order to pay for the new temple. The old Apollo temple was destroyed by a fire in 373/72.

Again, there’s not enough room here to list all the treasures, so we’ll limit ourselves to a few key notes on Asia Minor and the East. Here, the connoisseur will find a series of the popular stephanoephor tetradrachms, and not just from the better-known mints, but also from Alexandria Troas, Ilium and Tenedos. Of particular note as well is the large selection of electrum coinage: Cyzicus, Lampsacus, Erythrae, Mytilene, Phocaea, Lydia, as well as a host of pieces from uncertain mints in Asia Minor and Ionia. 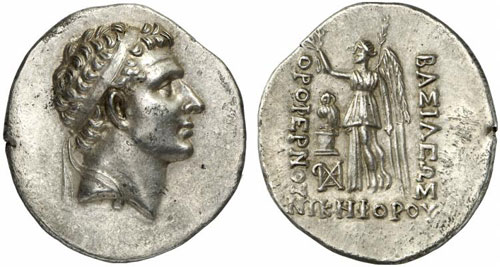 We must also mention two other very special rarities, a tetradrachm of Antiocheia on the Meander which not only features the eagle of Zeus on its reverse, but also a meandric pattern that this Antiocheia set apart from all the other ones (Estimate: 30,000 EUR) and a tetradrachm of Orophernes in the very best Greek style (Estimate: 50,000 EUR). Orophernes ascended to the Cappadocian throne in 158/7, as a pawn of the Syrian King Demetrius I.

The provincial city coins of the Roman Imperial era are next on the podium after the Greek coins. Here, we find yet another veritable treasure of rarities in best preservation, such as a large bronze from the city of Pergamum for Geta that depicts a rare personification of the sea – Thalassa – and of the old earth goddess, Ge (Estimate: 4,000 EUR). Also worth mentioning is a most rare small bronze from Smyrna that features the portrait of Vespasian the Younger, who was groomed as Domitian’s successor (Estimate: 2,000 EUR).

And this brings us to the Romans. Again, we are faced with the enviable quandary of having to choose among noteworthy pieces to mention here. Among select republic denarii, the connoisseur will also discover a small series of aureii, including such outstanding pieces as a perfect aureus of Sextus Pompeius with his portrait, as well his father’s and brother’s (Estimate: 40,000 EUR).

There are other extremely fine aureii scattered among all the superbly preserved denarii and magnificent bronze coins of the Imperial era. How about an aureus of Otho (Estimate: 75,000 EUR), or of Matidia perhaps (Estimate: 40,000 EUR) or even of Pertinax (Estimate: 20,000 EUR)? Of course, there are also the big-time rarities, like a bi-metal large bronze upon which the Emperor Gordian III is delivering a speech to his troops (Estimate: 18,000 EUR) or a multiplum of Emperor Constantine the Great of 2 solidi, the obverse of which depicts his portrait with the aureole and features his sons Crispus and Constantine II on the reverse (Estimate: 30,000 EUR).

You’d think that by the time we get to Byzantium, we’d be a bit less spoiled for choice as to what to highlight here. But not a chance! Even here we see a cluster of rare emperors: Iustinian II, Leontius, Philippicus Bardanes, Eirene, Michael I and Michael VI, just to name a few.

And there’s still more! Finishing up the auction is the Gustav Oberländer Collection, a fine collection of electrum fractions.

There are even some attractive, yet not explicitly extremely fine pieces from the Matton Collection on offer. There are also historical rarities, like an EID MAR denarius of Brutus for a mere 1,200 EUR, or a denarius of Vindex for only 150 EUR. With rare fractions and interesting backs, it’s basically everything a collector could hope for. Be sure to have a very close look through this catalogue – it features many items you don’t want to miss, amazing pieces of ancient history at extremely accessible prices.

This time, auction 209 spans two days, beginning in the afternoon of October 17th with a small section of medieval coins along with a larger number of sensibly compiled lots. But the real treasures here are buried in the German coins up to 1871, starting with Bavaria – there, you’ll find a 1640 extremely fine to FDC quintuple ducat of Maximilian I on the new fortifications of the city of Munich (Estimate: 7,500 EUR). Under Brandenburg / Prussia is another quintuple ducat, manufactured a bit later than the previous one. It’s a splendid 1721 coin in extremely fine condition of Frederick Wilhelm I of the homage in Stettin (Estimate: 20,000 EUR). Time and again, it’s the gold rarities in outstanding condition that prove a real highlight, and this year’s no different. These include a 1706 Hamburg ducat (Fr. 1116, almost FDC, 7,500 EUR), a 1760 Hohenlohe-Neuenstein-Öhringen ducat (Fr. 1138, FDC, 6,000 EUR), a 1511 Kempten gold gulden (Fr. 1427, almost extremely fine, 7,500 EUR), a 1547 Saxony ducat klippe (minted during the siege of the city of Leipzig, Fr. 2623, extremely fine, 7,500 EUR) and a Wurtemberg 10 gulden from 1824 (Fr. 3612, almost FDC, 7,500 EUR).

Another particular high point is the golden consular medal from Lübeck with a weight of 5 ducats to the mayor Anthon Winckler, the reverse of which features the distinctive cityscape of the Hanseatic town with its many towers (Estimate: 20,000 EUR). The 4-ducat piece of the free imperial city of Ratisbon with the title of Leopold I is equally stunning. This extremely rare showpiece is estimated at 25,000 EUR. The German States section ends with an extremely rare ducat from Ulm, minted in 1647. The last time a piece like this was up for sale was back in the 1930s, at which time it went to the new owner for the then exorbitant price of 65 marks. This was a high value in the 1930s much more as the 15,000 euros today!

Next up is Germany from 1871 on, featuring quite a few gold and silver rarities as well as a particularly interesting selection of lots, such as an attractive lot of 210 pieces of 5, 10 and 20-mark commemorative coins of the DDR from 1966 to 1990, with two trial pieces (Estimate: 4,000 EUR). From there, it’s on to the medals, where particular attention should be paid to the section of medals that make reference to the Ottoman Empire and its relationship with Europe. Gorny & Mosch is specialized in this little market segment. They started with the Dogan Collection, and the offering of Islamic and Western coins with an Islamic connection has continued to develop ever since. In addition to the medals, this auction also has a considerable section of around 120 Islamic coins up for auction.

And we’re not done yet! After the medals comes Austro-Hungary with quite a few rarities and many attractive coins to appeal to the specialist collector. The Europe section offers numismatics from all over the continent, from Albania to Hungary and beyond. This includes the extensive collection of Polish coins of Adolf Kargel, a man known to many collectors through his 1971 book “A Thousand Years of German-Slavic Interrelations in Numismatics.” The pieces selected for his collection also appear to be testament to this book, always straddling a crossroad of cultures. Take, for example, the showpiece of the collection, a 1699 medal by M. H. Omeis of the capture of the fortress of Kamieniec-Podolsk. The king depicted on it is better known in Germany as Augustus the Strong (Estimate: 4,000 EUR).

Shaping the offerings of coins from around the world are three large collections: There are almost 40 lots from China up for auction, with some modern commemorative coins in particular. There are about just as many coins from India up next, although the emphasis here is on coinage from the Kushan and Gupta Empires. Also of note is the extensive collection of more than 50 coins from the USA, which features a number of rarities. Bidders can take part here starting at only 40 EUR, provided they’re not hoping to vie for the absolute showpiece of the collection, a 20-dollar piece from 1861 from the New Orleans Mint in almost extremely fine condition (Estimate: 14,000 EUR).

Bibliophile numismatic literature, including numerous original prints of laws, edicts and decrees lead into the coins of the Orient with Caucasus and the crusaders.

Don’t let all these high-priced pieces detract from that fact that there are still a good many coins and medals available in auction 209 at very collector-friendly prices. Be sure to have a close look at the lots, where attractive coins are being offered in very sensible compilations at prices that are sure to surprise you.

Consignments for the upcoming auction in March 2013 will be accepted until December 21, 2012.