According to a recently released report from the World Gold Council, total identifiable gold demand fell 34% in the third  quarter of 2009. The main reason for the decline was comparison to the exceptionally strong demand in experienced in the year ago period. Gold demand did show an increase compared to the preceding quarter. 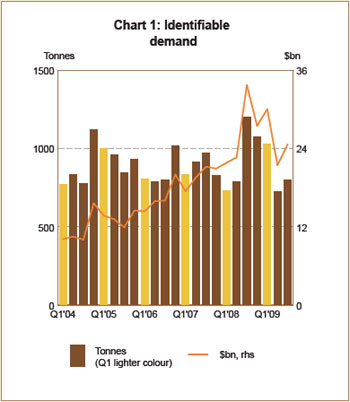 The report notes that gold supply for the quarter fell by 5% compared to year ago levels. The main driver of the decline was the decrease in supply from central banks. In the year ago period, central banks were net sellers of 77 tonnes of gold, while in the most recent quarter they were net purchasers of 15 tonnes.

The outlook for gold is described as “mixed,” with jewelry sales expected to continue to struggle and investment flows varying by region. Central banks are viewed as the most positive sector, with continued improvement in demand expected as central banks seek to diversify their dollar exposure.

The closing price of gold was 10% higher in dollar terms at the close of the third quarter compared to the year ago level. Over the same period, the price of gold rose 22% in Indian rupees, 36% in Turkish lira, and 27% in pounds sterling.