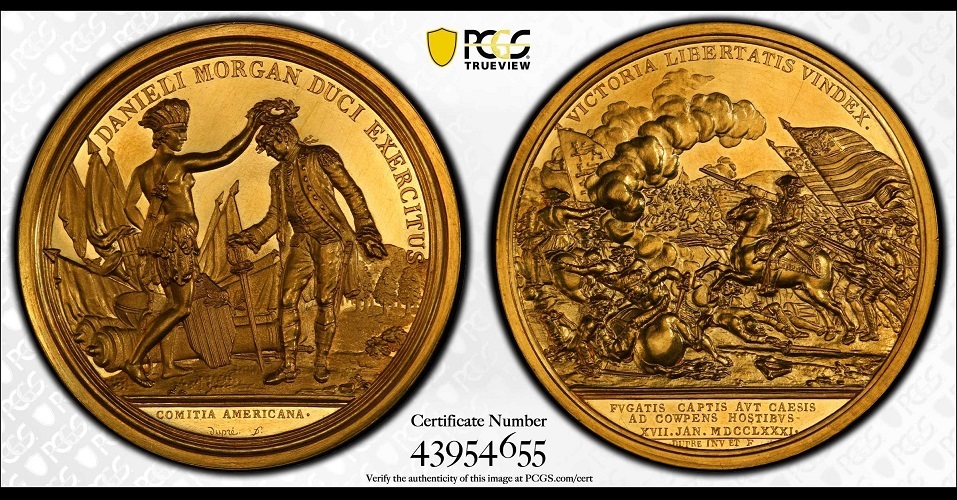 Costa Mesa, CA (April 5, 2022) — The only Daniel Morgan at Cowpens medal known in gold, the sole gold example struck at the Philadelphia Mint in 1839, set a new world record for any American historical medal today, selling for nearly one million dollars in an auction conducted by Stack’s Bowers Galleries. Breaking the previous record of $600,000 set by Stack’s Bowers Galleries last year, the medal brought $960,000, including the 20% buyer’s fee.​

The unique medal was the product of a special authorization by the United States Congress, signed into law by President Andrew Jackson in 1836. The Continental Congress initially authorized a Congressional Gold Medal to be awarded to General Daniel Morgan shortly after his important victory at the 1781 Battle of Cowpens. The gold medal given to Gen. Morgan was struck in Paris in 1789 but was stolen in 1818 in the first bank heist in the history of Pittsburgh. After the thieves threw it into the Ohio River, Morgan’s grandson Morgan Neville petitioned the U.S. government for nearly two decades to produce a replacement. After corresponding with retired president Thomas Jefferson and others, Neville’s efforts were successful — but he did not live to see them come to fruition. The medal was presented to Neville’s son in 1841 and remained in the family for generations. It was last seen publicly in 1885.

The medal was estimated at $250,000 to $500,000 before today’s auction. After six minutes of bidding, just two bidders remained, both bidding by phone. The winning bidder remains anonymous at the present time.

“The last time a Congressional Gold Medal struck for valor in the Revolutionary War was sold at public auction was 1978, when Gen. Anthony Wayne’s medal for the Battle of Stony Point brought a world record $51,000,” noted Stack’s Bowers Galleries numismatist John Kraljevich. “Not only is this market performing at a record-breaking pace, but the competition to own the best of the best continues to grow.”

Only six Congressional Gold Medals were awarded and struck for actions in the American Revolution. Four of those are in museum collections: George Washington’s at the Boston Public Library, Gen. Horatio Gates’ at the New York Historical Society, Gen. Nathanael Greene’s at the Rhode Island Historical Society, and Gen. Anthony Wayne’s at Independence Hall (on loan from the Pennsylvania Society of Sons of the Revolution). The original medals awarded to Morgan and to Capt. John Paul Jones are both lost.

Stack’s Bowers Galleries is the world leader in the sale of rare American historical medals, having held every world record in this field for more than 20 years. The August 2021 sale of the Congressional Gold Medal awarded to future President William Henry Harrison for valor at the Battle of the Thames in the War of 1812 set a world record for a medal struck at the United States Mint when it sold for $600,000. The previous record of $460,000, for the Congressional Gold Medal awarded to future President Zachary Taylor for the Battle of Buena Vista in the Mexican-American War, was set by Stack’s Bowers Galleries in 2006. It was preceded by a Thomas Jefferson Indian Peace medal sold for $115,000 by the firm in 2001.