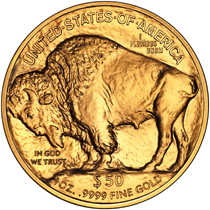 The United States Mint’s level of monthly gold bullion sales rose, driven by the release of the 2011-dated American Gold Buffalo Coins. Reported sales for silver bullion coins marked the lowest level in three months, although sales continued to be restrained by the Mint’s allocation program, which rations supplies amongst authorized purchasers.

Across all available options, the US Mint sold 111,500 troy ounce of gold bullion during March. This is up from the prior month total of 92,500 ounces and also up from the year ago sales level of 102,000 ounces.

This year, the Mint has been more rapidly releasing the gold bullion coin options that have typically been available. Last month, sales of the fractional weight 2011 American Gold Eagles began, and this month on March 14, the 24 karat Gold Buffalo bullion coins were made available. During 2010, sales for these bullion products did not begin until June 10 and April 29, respectively.

Sales of silver bullion coins were reported as 2,767,000 for March. This is comprised entirely of the one ounce American Silver Eagles. The US Mint expects to release the 5 ounce America the Beautiful Silver Bullion coins in late April.

Since the release of the 2011-dated Silver Eagles, the US Mint has conducted sales under their allocation program. This program serves to limit the number of coins that authorized purchasers are able to order. The US Mint has used the program at times when demand for bullion coins exceeds the available supply.

In an effort to increase the number of Silver Eagle bullion coins available, the US Mint recently indicated that trial strikes were being produced at the San Francisco Mint with the intention to begin temporary production in May. Currently, all Silver Eagles are struck at the West Point Mint.