In a memorandum sent to authorized purchasers, the US Mint indicated that their inventory of 2010 American Gold Buffalo Bullion Coins has been depleted. Furthermore, no additional inventory will be made available. 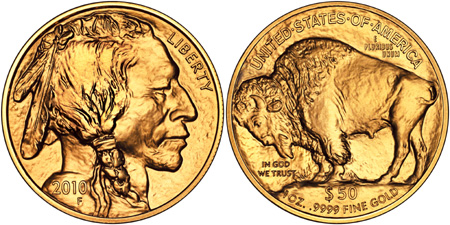 The American Gold Buffalo is the one ounce 24 karat gold bullion offering of the United States Mint. The coins have been available for precious metals investors each year since 2006.

The collectible proof version of the 2010 Gold Buffalo does remain available for sale from the US Mint. These coins also contain one ounce of 24 karat gold, but feature a cameo proof finish created through a specialized minting process. The collector coins are currently priced at $1,560 each, with the price subject to adjustments based on the price of gold. Through the last available sales report, the US Mint has sold 31,896 of the 2010 Proof Gold buffalo coins.