The United States Mint will began sales of the 2011-dated American Gold Buffalo bullion coins on Monday, March 14, 2011. These coins each contain one troy ounce of 24 karat gold. 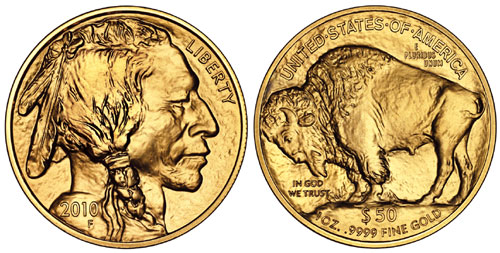 As a bullion offering, the coins will be sold to the US Mint’s network of authorized purchasers. This small group of primary distributors are able to order bulk quantities of the coins based on the market price of gold plus a mark up. The coins are then resold to other bullion dealers, coin dealers, and the public.

Since the US Mint has a sufficient quantity of the 2011 Gold Buffalo coins available, they will not be subject to allocation. In times when demand has exceeded the supply for various bullion products, the Mint has implemented an allocation program, which rations available coins amongst the authorized purchasers.

The American Gold Buffalo features the designs used on the 1913 “Type 1” Buffalo Nickel, created by James Earle Fraser. The obverse features a Native American chief, while the reverse depicts an American Bison, or buffalo. Inscriptions indicating the weight and purity of the gold content, nominal $50 face value, and the motto “In God We Trust” were added to the reverse of the coin. The same design has been used for the gold bullion coins since their introduction in 2006.

Later this year, the US Mint plans to release a proof version of the 2011 Gold Buffalo for collectors. The anticipated release date is May 19, 2011. Currently, the 2010-dated version remains available for sale, priced at $1,710 per coin.

Last year, the 2010 Gold Buffalo bullion coins were first available to authorized purchasers on April 29, 2010. On September 27, 2010, the US Mint announced that inventories had been depleted and no additional 2010-dated coins would be made available. Total sales had reached 209,000 of the one ounce gold coins.