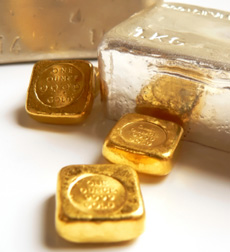 Since the beginning of the month, many unusual events have occurred that almost all have the effect, directly or indirectly, of knocking down gold and silver prices.

1.  For instance, go to http://www.federalreserve.gov/releases/h41/20110106/ to read the January 6 weekly Federal Reserve H.4.1 Factors Affecting Reserve Balances of Depository Institutions and Condition Statement of Federal Reserve Banks.  It begins with an announcement of an accounting change, effective January 1, 2011.  The change affects the reporting of each Federal Reserve Bank’s capital account and their distributions of residual earnings to the US Treasury.

In the past, when Federal Reserve Banks owed residual earnings to the Treasury, it was recorded as a reduction of the Banks’ capital.  Apparently that will no longer be done.  Instead the amounts owed to the Treasury will be posted in liability accounts.  The explanation is almost impossible to understand.  However, one analyst at Bank of America thinks that this means that any future losses by Federal Reserve Banks will no longer be recorded as lowering capital accounts.  Instead, any daily losses that might occur will end up being booked as either negative liabilities or maybe even as assets.  By this route, it will never be possible for the Federal Reserve’s financial accounts to show that it has become insolvent.  Of course, if the Fed can claim that it is financially sound, that would reduce investor fears of the safety and strength of the US dollar, thereby reducing demand for gold and silver as safe haven alternatives.

2.  CME Group, which owns the COMEX and NYMEX exchanges, just raised various margin requirements.  For gold and silver contracts, the average increase is about 6%.  It would be highly unusual for margin requirements to be increased at a time when prices were declining.  About the only reason to do so would be as part of an effort to suppress prices further.

3.  Since last Friday, the London Bullion Market Association silver market has extended its condition of backwardation as far out as 12 months!  In normal gold and silver commodity markets, future month prices are higher than the current spot month prices by roughly the effective interest rate offset by storage costs.  When the spot month price is higher than future months, that is an indication of an immediate supply squeeze.  When this occurs, normally prices rise and demand declines quickly to return the market to normal order (called contango).  Should backwardation continue for an extended period, the supply squeeze becomes more extreme and eventually results in even sharper price increases.

The London silver market has been in backwardation almost constantly for the past year, though never as far in the future as 12 months until the end of last week.  The last time that the silver market was in backwardation 12 months into the future was in January 2009.  At that time, the spot price of silver rose 40% within the following few weeks.

(Note: Most commodities other than precious metals are frequently in backwardation.  So, don’t interpret backwardation for other commodities as a sign of possible near term price increases.)

4.  There are a tremendous number of rumors flying around that range from plausible to laughably convoluted.  They all seem to provide some insights as to why gold and silver prices have fallen since the start of 2011 or why their prices might skyrocket in the very near future.  I don’t want to scare people by repeating any of them.  However, I can share some facts that may help the recent price dips into perspective.  First, every year for the past several years, gold and silver prices have each dipped by 5% or more at least twice each year, even though the annual trend has been for a significant increase.  Similarly, it is a general rule of thumb that the more severe a correction has been, the higher the subsequent price increases have been.  Therefore, there is no reason, absent other information, to expect the lower prices in January to be a signal of a market peak.

In fact, the data coming in is pointing the other direction.  Traders in London are reporting intensive demand for gold and silver from Chinese and other Far Eastern buyers.  There would normally be an increase in demand for purchases for the upcoming Lunar New Year, but demand is growing far more than the seasonal increase in past years.

The United States Mint has already reported its highest one-month sales of Silver Eagles (over 4.7 million!) since the debut of these coins in November 1986—with another ten days to go in the month!  In my own stores, silver bullion-priced products have been selling to retail customers almost as fast as we can get on the phones to replenish our inventory from wholesalers.

We are not necessarily beyond the current round of price drops, but I am extremely confident that prices will be far higher by the end of March.