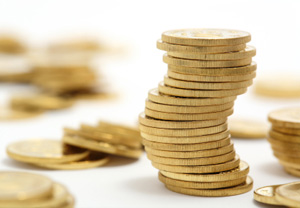 Although gold and silver prices have risen significantly in the past week, it is possible that they may soar in the coming weeks. Here are four developments given inadequate news coverage by the mainstream media that could spark skyrocketing prices.

First, using the M2 definition, the Federal Reserve’s latest weekly report of the US money supply showed that it rose by its greatest percentage in history except for two other weeks. The first was the week including September 11, 2001. The second exception was the week when Lehman Brothers failed in 2008. For the Federal Reserve to create so much liquidity must mean that “something” really bad and very big is on the brink of financial catastrophe.

While I don’t know exactly why the Fed is doing this, there are a lot of possibilities. For instance, Standard & Poor’s downgrade of US government debt triggered default provisions or credit downgrades in a number municipal bonds and corporate debt. This has to be putting a strain on potentially trillions of dollars of derivatives contracts that supposedly protect against such negative events.

Another possibility is that the banks in the Euro zone may be in such poor condition that a bank holiday may be declared, similar to what President Franklin Roosevelt declared in the US in 1933. The stock prices of many of the largest banks in the Euro zone have fallen 20-40% or more in the past month or so, creating substantial risks of failures.

The second risk is that if the US dollar index closes on Friday below 73.70, that will be a technical signal that the US dollar will quickly fall further in value. The index closed last Friday at 73.99.

Third, the current difference in the interest rate between BBB and BB-rated US bonds now exceeds 3%. That is a technical signal that the financial risk in the US economy has more than doubled over the past month. This disparity in interest rates says that there is a developing liquidity crisis similar to the worst that occurred in 2008.

This situation almost certainly means that a lot of investment money has been pulled out of high yield bonds and used to purchase precious metals.

If there is any difficulty or delay in Venezuela reclaiming their gold and currencies, this could ignite a frenzy by other central banks to repatriate their gold and currency reserves stored outside of their borders. The fears by these central banks are that the physical gold they supposedly own has been fraudulently pledged to cover the liabilities of exchange traded funds, or that the gold has been sold as part of past efforts to suppress gold prices and was replaced with paper IOUs.

The media is trying to downplay Venezuela’s action by claiming the President Chavez is merely trying to move reserves beyond the reach of the US, British, and other European governments. While this is probably true, what is more important is that this move could lead to potential collapses of major banks and gold and silver exchange traded funds.

At the beginning of this year, I forecasted that gold would reach at least $1,850 by the end of 2011. Now that it has reached that level, the price of gold could quickly reach $2,000 to $2,500. Even if only one of the potential crises I list above comes to pass, the prices of gold and silver would soar.

There are a growing number of investors that are anticipating much higher gold prices. Late last week there were more than 14,500 December 2011 COMEX call option contracts, representing potential demand for 1.45 million ounces of gold, at a strike prices of $3,000 per ounce. There were also 189 December 2012 COMEX call option contracts at a strike price of $5,000 per ounce!

The only way to get ahead of soaring prices is to add to your physical gold and silver positions right away. If you already own positions in gold or silver exchange traded funds, you may want to sell off these holdings and replace them with physical metals in your possession or stored in segregated accounts under your own name.