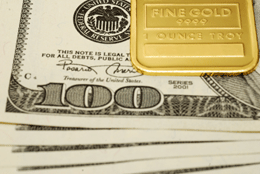 Watch Out for Higher Consumer Prices After The Election

After a slight drop in gold and silver prices at the end of last week, they fell further this week.  The developments that led the US dollar to rise in value (which is the reason metals prices dropped) all appear to be pure politics.  It is more than suspicious that they were timed to provide the maximum benefit to incumbent politicians seeking re-election on November 2.

All this talk led analysts almost unanimously to expect that the Federal Reserve Open Market Committee (FOMC) will announce further quantitative easing (inflation of the US money supply) at the close of their meeting the day following the elections.  The discussion has been the extent of the increase in the US money supply, not whether the government would manufacture more money out of thin air.  The average forecast was for about $100 billion per month, roughly equal to the Federal government’s monthly budget deficit, which comes as no surprise.

Last week, the US dollar had fallen by more than 13% since June 8th, and some of the  public were starting to take notice.  So, on Monday, October 18, Geithner gave a speech in Palo Alto, California to contradict what he and other top US government officials had recently stated.  When asked if the US government was actively weakening the value of the US dollar, Geithner said, “It is not going to happen in this country.”  He later said that the United States needed to “work hard to preserve confidence in the strong dollar.”

Perhaps his most significant statement was, “It is very important for people to understand that the United States of America and no country around the world can devalue its way to prosperity, to (be) competitive.  It is not a viable, feasible strategy and we will not engage in it.”

This speech led to a quick surge in the value of the US dollar, resulting in a further drop in gold and silver prices.

I agree with Geithner’s statement that no government can devalue its currency to achieve prosperity.  However, I am convinced that this statement was made only for short term political benefits for incumbent Democrats, and that Geithner knowingly lied when he said that the US government would not engage in further devaluation of the US dollar.

Further, as I said, I expect that the tone of the FOMC statement forthcoming on November 3 has already been decided and will contradict Geithner’s October 18 comments.

At the beginning of the week, China made a surprise announcement that it would raise its interest rate for the first time in three years.  A government interest rate increase is normally an attempt to slow down the appreciation of that nation’s currency versus other currencies.  So, typically, this announcement would have the effect of causing the Chinese currency to rise against the US dollar.  Since gold and silver prices are quoted worldwide in US dollars, that would usually cause precious metals prices also to increase.

This time, however, the Chinese announcement had virtually no impact on gold and silver prices.  The lack of a reaction is opposite to normal market behavior.  What could cause such a strange result?  My best guess, and I have seen no information to confirm this, is that the Chinese notified US officials ahead of time in order to allow time for gold and silver price suppression tactics to be planned and executed.

Therefore, I expect a delayed reaction to the increase in China’s interest rates before the US dollar falls slightly and gold and silver rise somewhat.

Despite the US government’s assertion that consumer prices are not increasing fast enough, there are already signs of price increases, a trend that I expect to accelerate once we are beyond the elections.  One researcher tries to get a more accurate handle on changes in actual consumer prices by doing a monthly survey of a basket of goods purchased from Walmart.  In the latest report, released earlier this month, the cost of the basket of items had increased by more than 2% from the previous month!

It is easy to see why prices would be rising.  Most of Walmart’s purchase orders are probably denominated in US dollars.  As the value of the US dollar declines, the foreign vendors are effectively receiving less money for their goods.  When it comes time for new purchase contracts to be negotiated, you can be sure that foreign vendors will be insisting on significantly higher prices to offset the losses caused by a falling US dollar.

General Mills announced this week that it would be increasing the prices of some of its products on November 15, 2010 or January 3, 2011, both dates that are conveniently after the election.  When reporters checked with Kraft officials about that company’s plans, they were told that Kraft had already started making selective price increases.  Grocery store chains Kroger and Safeway said they expect to pass along these price increases to consumers.

Right after the new health care legislation was enacted at the end of March, a number of major corporations released estimates of how many billions of dollars the changes would cost their companies.  Such pronouncements quickly ceased.  As these increased costs contradicted the administration’s pretense that the new health care law would not have a significant impact on businesses, I suspect there was some behind-the-scenes pressure brought to bear on major companies to not report the truth about soaring costs caused by this legislation.

On October 14, Boeing Co. sent a letter to its approximately 90,000 non-union employees.  In the letter, Rick Stephens, Boeing’s senior vice president for human resources announced that the company would be phasing in higher deductibles, co-payments, and co-insurance for healthcare coverage beginning in 2011.

The letters stated, in part, “The newly enacted health care reform legislation, while intended to expand access to care for millions of uninsured Americans, is also adding cost pressure as requirements of the new law are phased in over the next several years.”

Boeing Co. is a huge federal government contractor.  Any difficulties that Boeing may cause to the administration, especially so soon before an election, may provoke future loss of federal contracts or other problems.  So, on October 18, when news of this letter was widely reported, a spokesman for the company denied that there were any specific provisions in the new law that affected Boeing’s action.

When you put it all together, almost every indicator points toward much higher consumer costs after the elections.  Much of this will happen because of the continuing decline in the value of the US dollar.  If you have not already done so, it is time to protect your financial health with a position in physical gold and silver.

By the way, the drop in prices this week was more than we have seen for the past several months, with silver down more than 10% from its intraday highs last week and gold down almost 5%.  Buyers in India stepped up their purchases when gold got down to $1,340 and lower.  Savvy buyers have jumped into the market to take advantage of what I expect to be a temporary price dip.

Late yesterday, we were notified by one of the nation’s largest bullion wholesalers, A-Mark Precious Metals, Inc., that any new orders for their own brand of 10 ounce silver ingots would not be shipped for at least seven weeks.  Their 1 ounce silver rounds are now delayed two to three weeks.  Also, Canadian Silver Maple Leafs and Johnson Matthey-brand 100 ounce silver ingots won’t be available for several weeks.  I would not be surprised to see gold and silver availability further deteriorate in the next month.