The National Bank of Poland has issued two new coins which remember the 150th anniversary of birth of one of Poland’s most hallowed authors, Stefan Zeromski (1864 – 1925). His extraordinary gift for compassion, his open-mindedness, and the dramatic plots of his books won him a loyal following. Zeromski was known as “the conscience of Polish literature” and there was some surprise when fellow Pole Wladyslaw Reymont won the Nobel Prize in 1924, with many feeling that Zeromski was the more deserving candidate. He was born to a family of impoverished gentry and spent his childhood and early youth in the Swietokrzyskie Mountains. From 1874 to 1886 he attended the State Gymnasium for Boys in Kielce which now houses the Museum of Stefan Zeromski’s School Years, a branch of the National Museum in Kielce. Subsequently, he went to Warsaw, where he started studies at the Veterinary School. However, difficult conditions forced him to give up studies and take up the work of a private tutor.

The first published works by Zeromski were written at the time of his studies – these were poems. In 1895 two collections were published: Stories and Ravens and Crows will Peck us to Pieces. He also wrote under various pen names such as Maurycy Zych and Józef Katerla. His best known pieces include The Labours of Sisyphus, Homeless People, Ashes, The Wages of Sin and The Faithful River. In his final years he wrote Snoberry and Progress, a collection of stories – Mistakes, a novel and a poem entitled The Fir Forest. Apart from literary work, Zeromski devoted his time to social work. He founded schools, universities and libraries. He actively contributed to the organization of cultural and literary events. The laureate of numerous prizes, he was also shortlisted for the Nobel Prize in literature. His works have been translated into a number of languages, as well as adapted for the stage and the screen. Zeromski died on the 20th November 1925 in Warsaw and was buried at the Evangelical Reformed Cemetery in Warsaw.

The coins, one gold and silver are produced by the Mint of Poland in Warsaw. The gold coin is designed by artist Dominika Karpińska-Kopiec and the silver coin designed by artist Robert Kotowicz. The gold coin includes a contemporary portrait facing three quarters towards the left with the author’s name in bold letters just below along with the years of Zeromski’s birth and death. The reverse includes the national insignia of the crowned eagle encircled in the author’s more well-known literary works & titles in text. 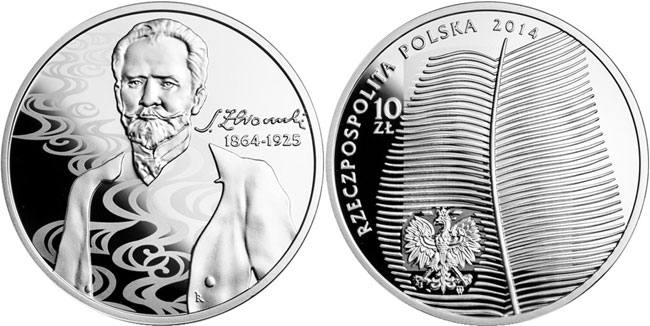 The silver coin includes a front-facing head and torso image of Zeromski as he appeared in his younger years as well as his facsimile signature and years of his birth & death positioned to the right of the portrait. A decorative motif is also applied by laser technique depicting stylized waves representing a river that refers to Zeromski’s novel The Faithful River. On the reverse, the national emblem – a crowned eagle and the coin’s denomination is shown along with the symbol of writers and poets – a feather. Behind is a new and fresh sheet of paper created and applied by laser technique.

The coins are available separately by visiting the website of the National Bank of Poland at:   https://www.kolekcjoner.nbp.pl/sklep/home.nbp?cid=41341 Orders are dispatched to domestic destinations. Collectors are also invited to contact the Mint of Poland’s sales office directly at: for international destinations.