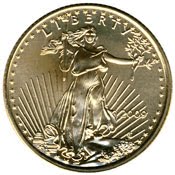 Sales of precious metals bullion coins from the United States Mint remained at elevated levels into the end of the year. This was despite suspensions imposed for the one ounce Gold and Silver Eagles early in the month and the return of a rationing program which served to limit the number of coins that could be ordered by authorized purchasers. The full year numbers available established a new record high for for the one ounce American Silver Eagle bullion coin.

The US Mint sold a total of 247,500 ounces of gold across the five gold bullion products available during the month. The offerings included the one ounce Gold Eagle, fractional weight Gold Eagles, and the 24 karat one ounce Gold Buffalo. The one ounce Gold Eagles, which had been available throughout most of the year, spent the first half of the month under a sales suspension. The fractoinal Gold Eagles were offered for the first time in December and promptly sold out of two separate batches that were offered. The Gold Buffalo bullion coins sold 16,000 in the first few days of December before the US Mint’s inventory ran out. The 24 karat gold offering originally went on sale on October 15, 2009.

A total of 2,773,500 ounces of silver were sold during the month in the form of one ounce American Silver Eagle bullion coins. Sales were under suspension for the first few days of December before being resumed on a rationed basis. The total number of coins sold for 2009 represents a new record annual high at 28,766,500. The prior record was set last year when 19,583,500 coins had been sold.

To start the month of January 2010, the US Mint is continuing to sell their remaining inventory of one ounce Gold and Silver Eagle bullion coins bearing the 2009 date. One ounce 2010 Gold Eagles and 2010 Silver Eagles will go on sale to authorized purchasers on January 19, 2010.