The Royal Mint have launched (13th March) the Commonwealth Games commemorative coin precious metal versions. This year’s sports themed coin is available well in time for the start of the 2014 Commonwealth Games to be hosted in Glasgow, Scotland.

Following the successful launch of the Brilliant Uncirculated coin set earlier this year, the coin has become a popular souvenir of the 20th Games – which meets every four years hosted by a member of the Commonwealth. A total of 70 nations and territories will compete over an 11-day period in 17 sports. It is expected that more than 4000 athletes will take part in this year’s event beginning on the 23rd July and commencing on the 3rd August. 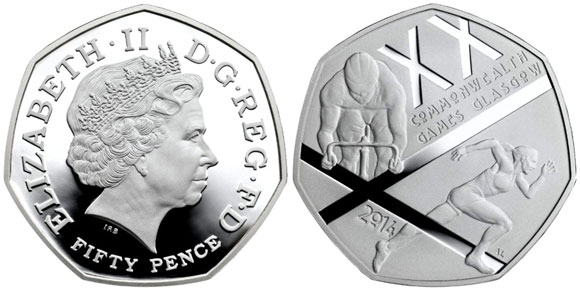 Designers Alex Loudon and Dan Flashman took two of the most iconic sports – athletics and cycling – and added the Saltire of Scotland and lettering inspired by Charles Rennie Mackintosh to create a dynamic design for the reverse side of the 2014-dated 50 pence piece. The obverse side includes the current portrait of HM Queen Elizabeth II as used on all circulation coins in the UK since 1998.

Each precious metal piece is encapsulated and packaged in a custom presentation box with certificate of authenticity and this year’s 50 pence precious metals commemorative coins have an especially smaller mintage than in previous years.