Glacier National Park, located in northwestern Montana, is on the border with the Canadian provinces of Alberta and British Columbia. Lewis and Clark traveled within 50 miles of the park’s territory in 1806 during their exploration of the Marias River. In the late 19th century, the efforts of George Bird Grinnell, noted for his work in preserving the American buffalo, were instrumental in the preservation of the area, describing it as “The Crown of the Continent.”

The area  was designated as a forest reserve in 1897, then as a national park in 1910 by President Taft. That final designation ran contrary to the understanding of the Blackfoot Native American tribe, who believed that their usage rights for the mountains should have continued. 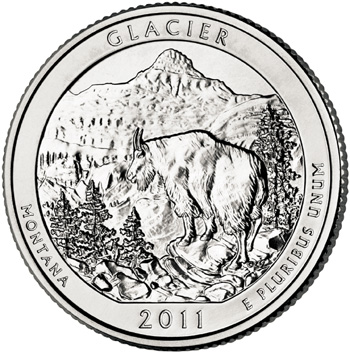 The Glacier National Park Quarter will be the latest issue of the United States Mint’s America the Beautiful Quarters Program, representing the second release of this year. The reverse design depicts a mountain goat, the official symbol of the park, in the foreground of Mount Reynolds. Also included in the design are the incused phrases “Glacier”, “Montana”, and “E Pluribus Unum”, as well as the date of issue.

The official circulation release date for the quarter will be April 4, 2011. The following week on April 13, 2011 at 1:00 PM ET, the United States Mint and National Park service will hold a launch ceremony at Columbia Falls High School in Columbia Falls, Montana.

The Glacier National Park Quarter will be available directly from the U.S. Mint within the following products: