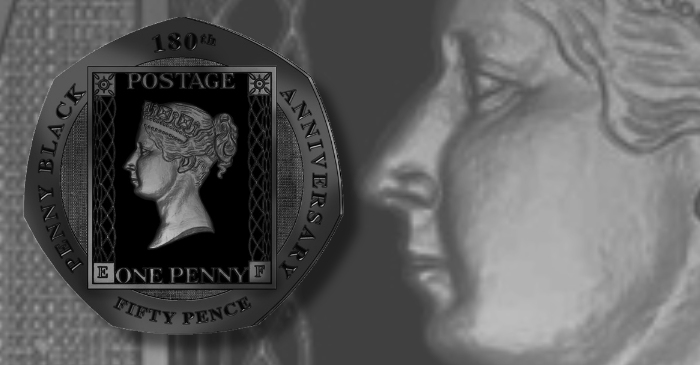 The treasury of Gibraltar has released (3rd December) new gold and silver collector’s coins which are in celebration of the world’s first-ever postage stamp. The Penny Black, as it is referred to, is remembered as the world’s first postage stamp used in a public postal system. It was first issued in the United Kingdom on the 1st May 1840 but was not valid for use until five days after its release.

In 1837, British postal rates were, in some instances, high but undoubtedly complex and inconsistent. At the time, it was the usual practise for the recipient to pay postage on delivery, charged by the number of sheets of paper included in the letter and on distance travelled. By contrast, the Penny Black revolutionised the postal system by allowing letters of up to 1/2 ounce (or 14 grams) to be delivered at a flat rate of one penny, regardless of distance. On the 13th February 1837, Sir Rowland Hill (1795–1879), a prominent social reformer, proposed to a government enquiry both the idea of a pre-paid stamp and a pre-paid envelope or formed sheet of paper folded to form an enclosure for carrying letters. For his concept, Hill was given a two-year contract to run the new system, and along with Henry Cole (1808–1882), an experienced civil servant, he announced a competition to design the new stamp. Out of more than 2,600 entries submitted, none was considered suitable and instead a rough design endorsed by Hill was chosen. The design featured an easily recognisable profile of the former Princess Victoria, who became Queen that year and which Hill believed would be difficult to forge.

Initially, Hill specified that these new stamps should be a 3/4-inch square, but altered the dimensions to 3/4-inches wide by 7/8-inches tall to accommodate inscriptions at the top bottom. The word POSTAGE at the top of the design distinguishes it from a revenue stamp, which had long been used in the UK, and the stamp’s value of ONE PENNY, its pre-paid cost, is placed at the bottom. Aside from the profile of the young Queen, a background of finely engraved geometric patterns was also added to lessen counterfeiting.

The two upper corners of the overall design included two Maltese crosses with radiant solar discs at their centres, and in the lower corners, letters show the position of the stamp in the printed sheet, from A A at the top left to T L at the bottom right. The sheets were printed by the firm of Perkins Bacon and consisted of 240 stamps in 20 rows of 12 columns. One full sheet cost 240 pence (or one pound) with one row of 12 stamps costing one shilling. As the name suggests, the stamp was printed in black ink and at the tie, were not pre-perforated, as the user needs to cut them with scissors carefully.

Officially issued to the public on the 1st May 1840, the “Penny Black” lasted less than a year. This was largely due to the red cancellation mark which was difficult to see on the black design, and the red ink was easy to remove, making it possible to reuse cancelled stamps. As a corrective measure, the treasury decided to print the one-penny stamp using red ink and switched to black ink for the cancellation mark by February 1841. Subsequently, a two-penny stamp printed in blue and covering the double-letter rate of up to one ounce was officially issued on the 8th May 1840, which proved more successful. 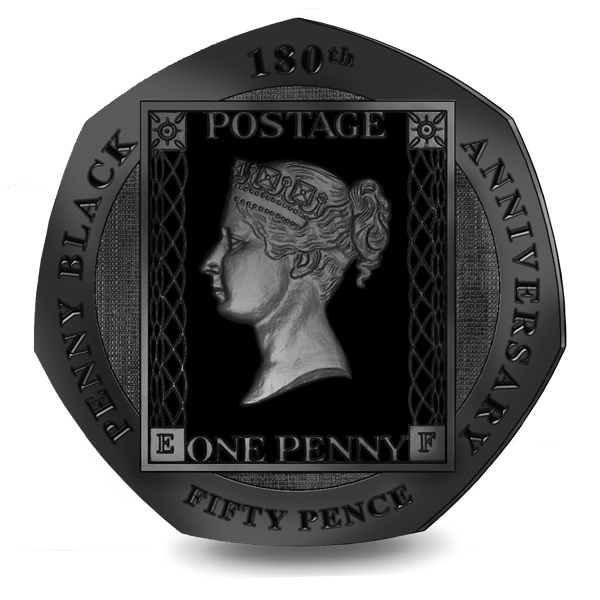 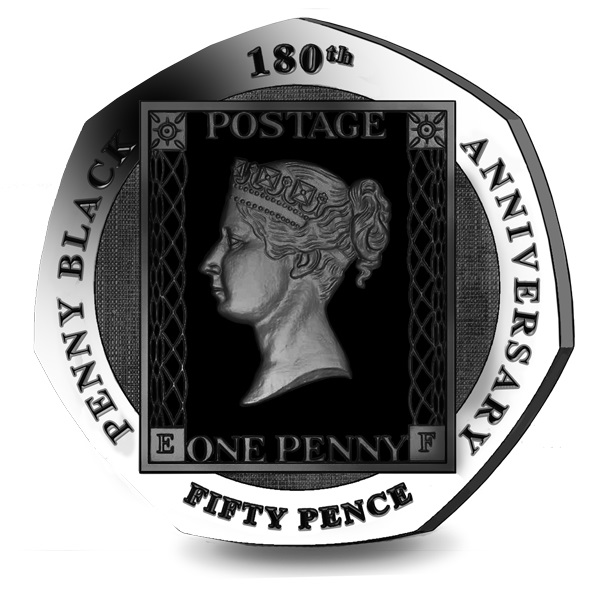 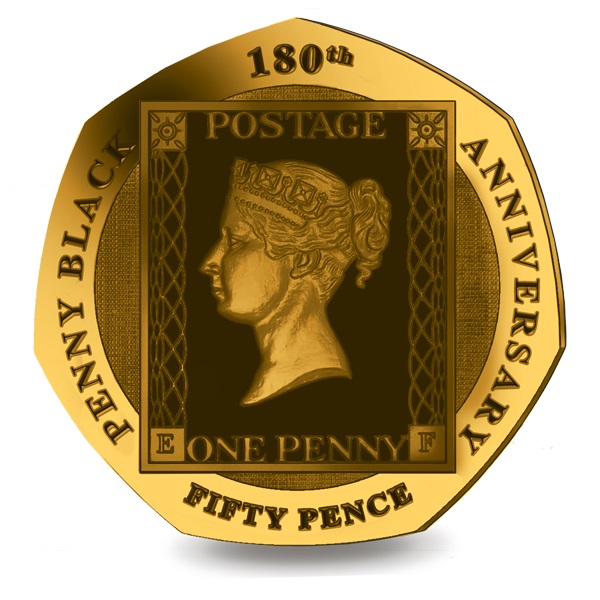 The new seven-sided 50-pence coins are issued in cupro-nickel, sterling silver, and 22-carat gold in Proof quality, which are produced by the Pobjoy Mint, UK, at their facilities in Surrey, on behalf of the treasury of Gibraltar. The reverse designs shared on all variations depict an intricately detailed replica of the original Penny Black stamp, which is centred. A commemorative inscription, which is incused on a wide rim, surrounds the design and reads PENNY BLACK 180TH ANNIVERSARY while the denomination of FIFTY PENCE is placed below the primary design. 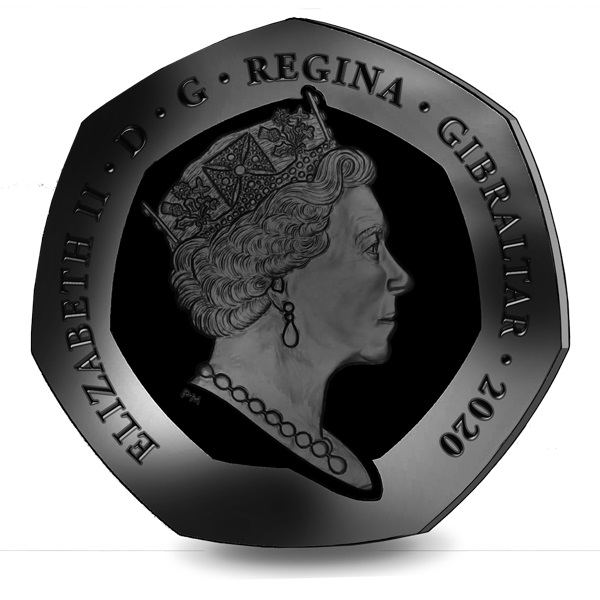 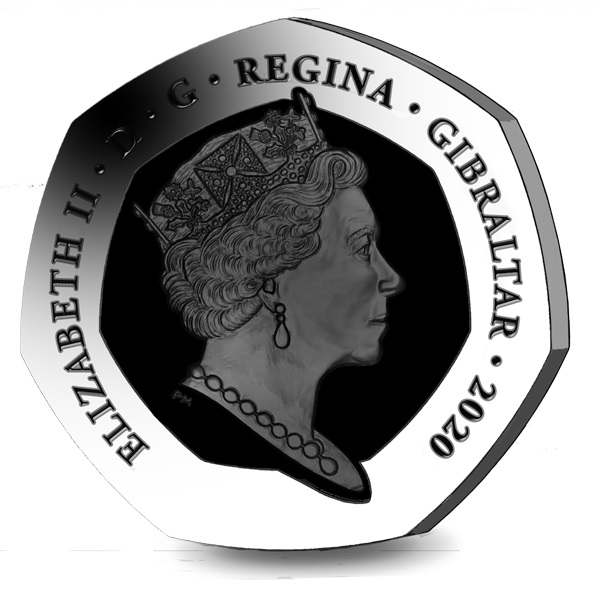 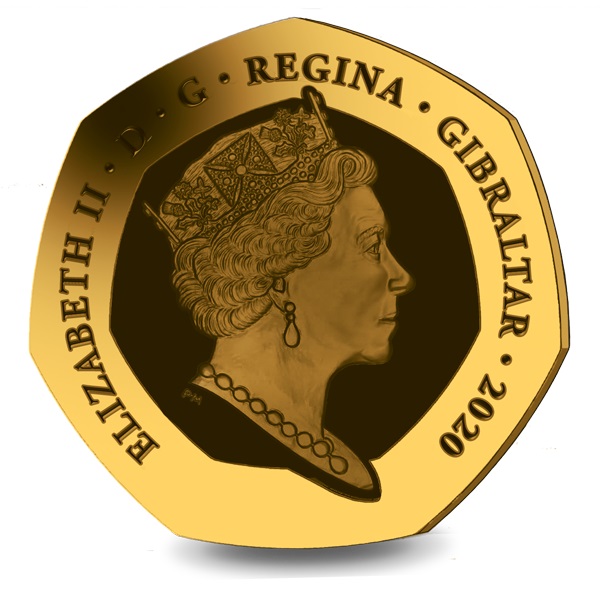 The obverse side includes an effigy of HM Queen Elizabeth II, which is an exclusive design to the Pobjoy Mint. The year of issue, 2020, is included within the legend surrounding the Queen’s likeness.

As an additional feature to all variations, each coin will have the lustrous *Pearl Black finish, which is a special innovative technique adopted by the Pobjoy Mint to create the beautiful effect complemented by the incused rim, and for the first time is being applied to the 50-pence denomination. 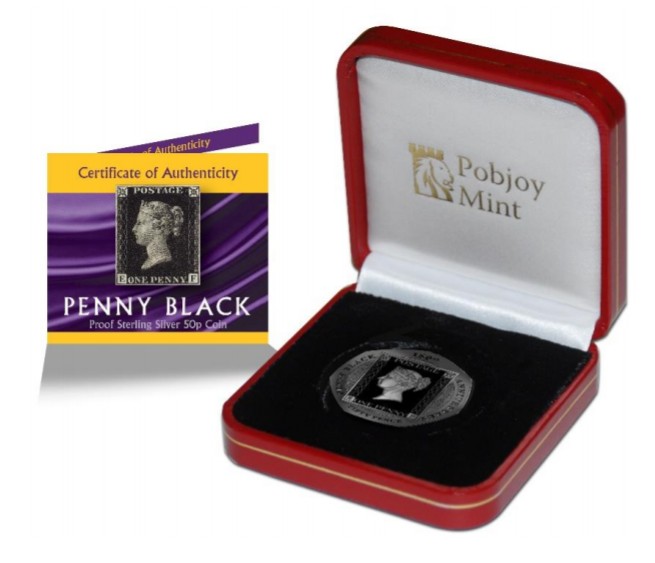 The precious metal coins are individually encapsulated and presented in a beautiful red case with a certificate of authenticity. 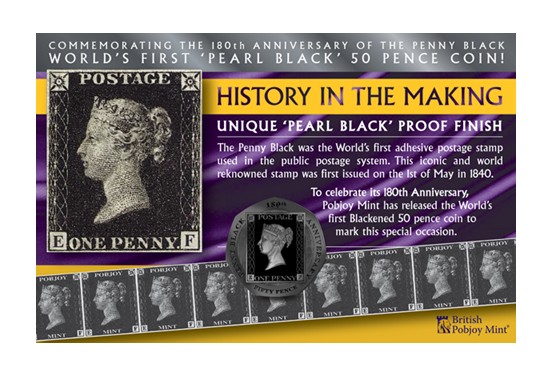 The cupro-nickel Diamond finish coins are presented in a special anniversary pack. For additional information about these coins and others issued by the treasury of Gibraltar, please visit the website of the Pobjoy Mint UK.

*In 1990, for the 150th anniversary of the Penny Black, the Pobjoy Mint created a crown coin for the Isle of Man. These crowns are remembered as having been the most innovative coin of its time as the Pearl Black finish was first applied to a coin. In fact, this exceptional coin was recognised for its innovative process when it was awarded no less than THREE COTYs (Coin of the Year): Best Crown, Most Innovative Coinage, and overall Coin of the Year.