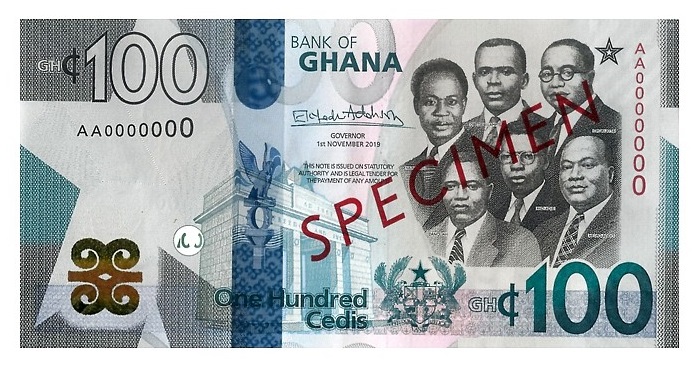 All Ghanaian banknotes within their current series of banknotes introduced in 2007, with the exception of the two-cedi note introduced in 2010, include a group portrait of the founders of the nation shown on the face. The group portrait comprises six distinguished Ghanaians who spearheaded the struggle for Ghana’s independence. Also shown on the face is an image of the Independence Arch, a national symbol of the political independence of Ghana. Referred to in Ghana as the “Big Six,” they were instrumental in leading Ghana to independence in 1957 and are:

Both banknotes include the date 1st November 2019, which is located just below the signature of the bank’s governor, Dr. Ernest Y Addison, who introduced the banknotes in a speech at the Bank of Ghana’s main hall on the day of their official release. According to the bank, the new GH ¢100 notes are intended to complement existing cedi-denomination banknotes and to ease large-value transactions. The bank added that the GH ¢200 banknote would be introduced gradually into circulation and in limited quantities. 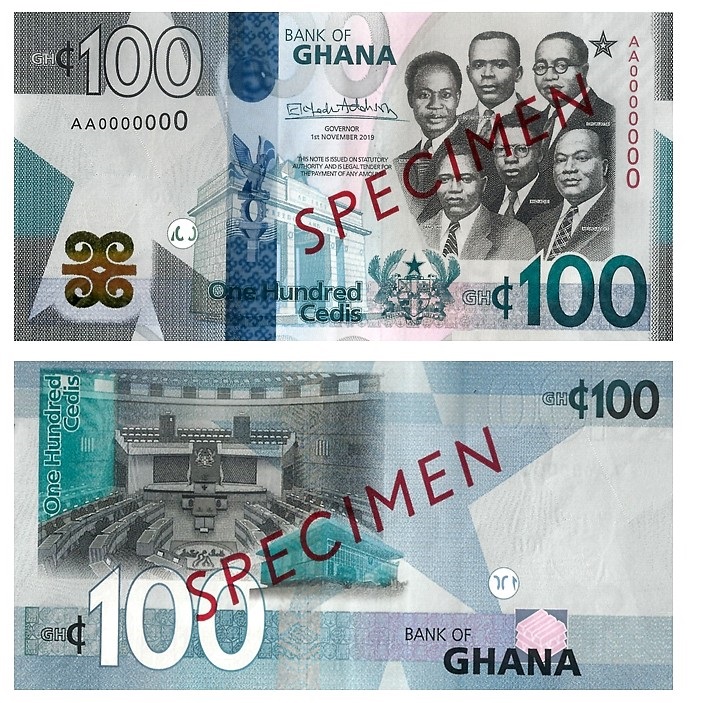 GH ¢100: (Olive-blue) 157 by 80 millimetres. On the back is an image of both the façade and interior chamber of Ghana’s Parliament, a new structure which was completed and inaugurated in 2015. 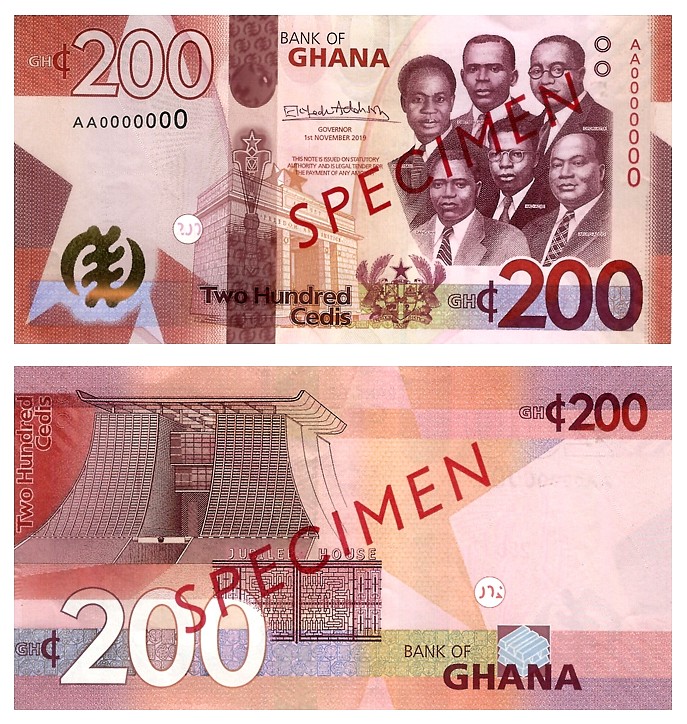 GH ¢200: (Orange-brown) 161 by 83 millimetres. On the back is an image of Jubilee House, the presidential palace in the country’s capital, Accra, that serves as both the residence and office to the sitting president of Ghana.

Security features on the new notes include:

3-D Motion Surface strip: A vertically placed stripe is shown on the face side with motion action when the note is tilted.

Optically Variable ink application: A shape/figure located towards the lower-left corner changes colour from green to gold when tilted.

Enhanced watermark: The image of Tetteh Quarshie (1842–1892), along with a cocoa pod, are seen located to the left half of the notes when held up to a light source. Quarshie was an agriculturalist who is remembered for introducing cocoa crops to Ghana, then known as the Gold Coast. Today, cocoa harvesting constitutes one of the major export crops of the Ghanaian economy.

Tactile Print application: Each denomination includes a unique shape or symbol located on the top right half from the front side — this shape aids in identifying the note for those who are visually impaired.

Iridescent Strip printing: A vertical printed strip including images of stacked gold bars is located on the back side of the new notes. When held against a light source, the shimmering strip is clearly visible.

In a redenomination exercise that sought to recalibrate the currency due to significant deadweight burden, which was a legacy of long periods of high inflation and currency devaluation. The 2007 series was part of a redenomination exercise aimed at eliminating four zeros from the previous unit of currencies, which was carried out in an attempt to introduce efficiency into the economy and remove the dead-weight burden associated with transactions. At the time of the redenomination, the newly redenominated GH ¢1 was equivalent to U.S. $1. The highest denomination then was GH ¢50 and was equivalent to U.S. $50.

In May this year, the Bank of Ghana released into circulation upgraded banknotes of the current series of 0ne to 50 cedis, launched in 2007. In addition to enhancing the security features, the upgraded banknotes came with specific features to improve the durability of the cotton-fibre paper-printed notes, also enhancing their machine readability. All notes in the updated series retain the design features of the existing series of banknotes introduced 12 years ago in 2007.

During the launch, the Bank of Ghana also took the opportunity to introduce a new GH ¢2 (U.S. $0.36) bi-metallic circulation 10-sided coin. It is believed the coins are produced at the Royal Mint in the United Kingdom and include holographic technology, latent imaging, and micro-lettering as part of the design and as security measures. The obverse side includes an image of Jubilee House, the official offices and residence of the country’s president. The reverse side depicts the country’s coat of arms, the denomination in numerals, and the text GHANA shown above the crest. 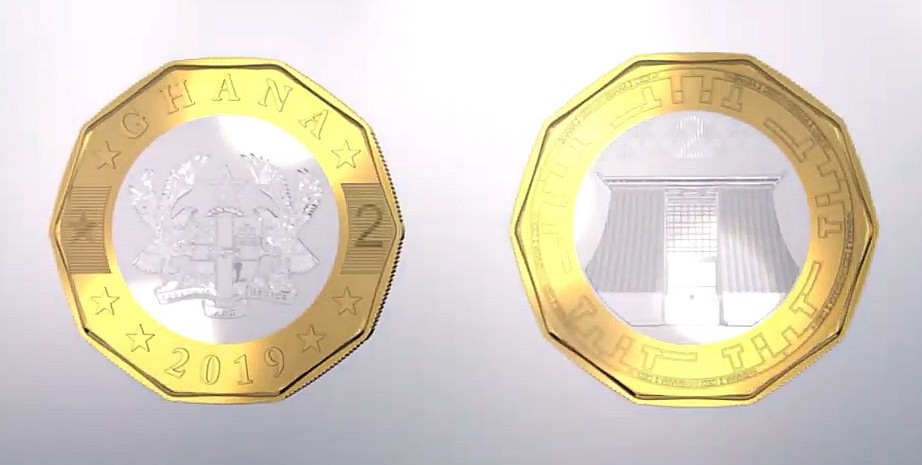 The goal of a common currency, first in the West African Monetary Institute (WAMI) and ultimately a West African Monetary Zone (WAMZ), was agreed to in December 2000. On the 29th June 2019, the leaders of the Economic Community of West African States (ECOWAS) formally adopted the name of “Eco” for their project of the single currency. The ECOWAS states include Ghana as well as Liberia, the Gambia, and Nigeria, among other countries.

It is worth noting that in October 2019, according to the International Monetary Fund, the success of the project to replace the CFA franc in West Africa with a common currency, the eco, is planned from 2020.

For additional information about the coins and banknotes presently in circulation, please visit the website of the Bank of Ghana.