This will represent the first release of the year for the America the Beautiful Quarters Program. The series, which began in 2010, will feature a National Park or other national site from each state, U.S. territory, and the District of Columbia in the order federally designated. 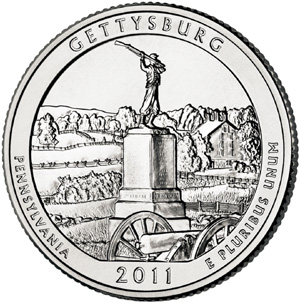 The Gettysburg Quarter features a depiction of the 72nd Pennsylvania Infantry Monument, which is located on the battle line of the Union Army at Cemetery Ridge. This image, which appears on the reverse of the coin, was designed by Joel Iskowitz and sculpted by Phebe Hemphill. The obverse features a portrait of George Washington by John Flanagan.

The ceremony will be open to the public, with a coin exchange taking place after the event. Attendees will be allowed to exchange currency for $10 rolls of the new quarters. Children aged 18 and younger will receive a free quarter.

Prior to the launch ceremony, on January 24, 2011 at 5:30 PM ET, a coin forum will be held where the public can ask questions and share ideas about United States coinage. The forum will be held at the Ford Motor Company Fund Education Center at the Gettysburg National Military Park Museum and Visitor Center.