Founded by Walter Gropius on the 1st April 1919, the word “Bauhaus” became a by-word for a particular style and approach to design and later architecture. Despite the fact that its name denoted building design or construction, the original concept (or school) did not have an architecture department during its first years of existence, even though its founder was an architect. The Bauhaus style would become one of the most influential movements in modern design, Modernist architecture, as well as architectural education. It has been long established that the Bauhaus had a profound influence upon subsequent developments in art, architecture, graphic design, interior design, industrial design, and typography. 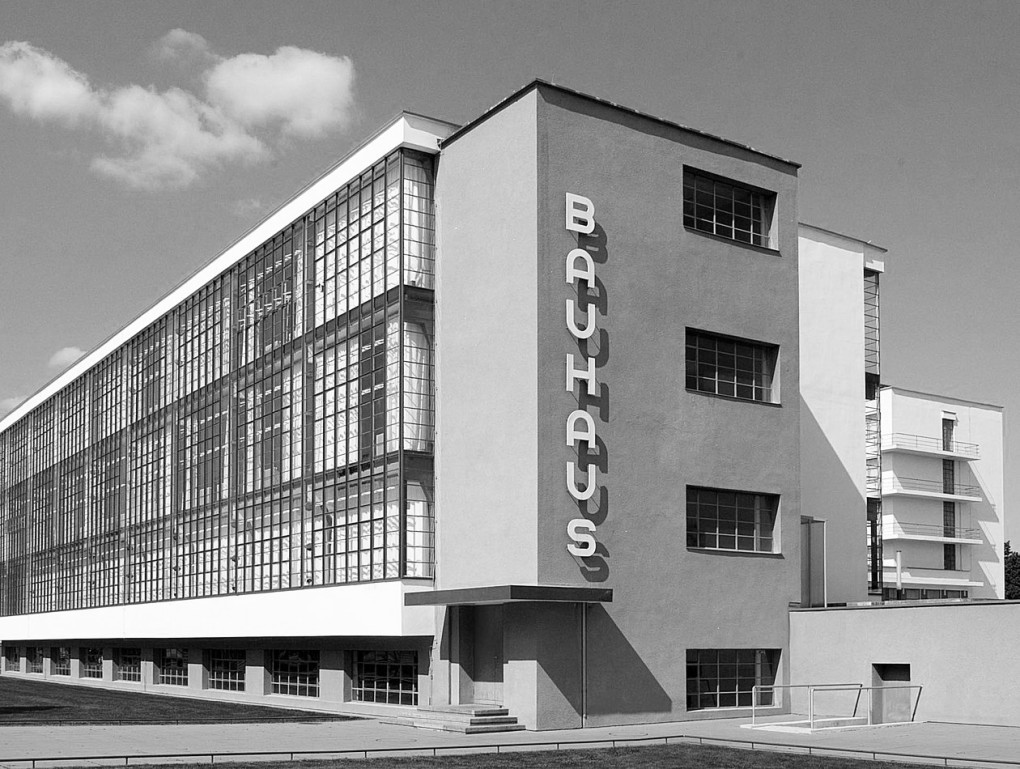 With the growing popularity of the National Socialists in post-war Germany during the Weimar Republic, art institutions came under increased political pressure. By 1933, the first year of Hitler’s Third Reich, the Bauhaus was forced to close and many of their directors and instructors were forced into exile. According to Nazi authorities, the Bauhaus was denounced for spreading “degenerate art” and “cosmopolitan modernism.” Though Gropius, its founder, protested that because he was a war veteran and a patriot, his work had no subversive political intent, the Berlin Bauhaus school was forced into closure in April 1933. As the Bauhaus were located in three German cities, Berlin from 1932 to 1933, Weimar from 1919 to 1925, and Dessau from 1925 to 1932, the Berlin location was the last to close its doors. However, the movement did not end there, as many of their instructors and directors chose exile before arrest and took with them, the concept. The “New Bauhaus” was established by Ludwig Mies van der Rohe, the last director of the Berlin school, who re-settled in Chicago to accept the directorship of the School of Architecture at the Armour Institute, now the Illinois Institute of Technology. Even though the Bauhaus was closed in the country, some of its influence continued in Nazi Germany. As the government’s chief engineer, Fritz Todt, began designing and opening the new autobahn in 1935, many of the bridges and service stations were seen as “bold examples of modernism.” This wasn’t much of a surprise, since among those submitting designs was Mies van der Rohe.

The coins are struck at the Federal Mint, Hamburg, and denote the “J” mintmark on the reverse side. The designer of the coins is Bastian Prillwitz. The obverse design includes a collection of some of the Bauhaus’s most distinctive styles and features the unique logo shown on the side of the school building located in Dessau. The inscription 100 JAHRE is placed just to the left side of a featured staircase. The reverse side includes the depiction of a stylised eagle along with the text BUNDESREPUBLIK DEUTSCHLAND (“Federal Republic of Germany”). A series of six stars arranged in two rows is placed on either side of the centred eagle, along with the denomination of 20 EURO and the year of issue, 2019. The fineness of the silver is placed above the primary design. The smooth edge includes an incused inscription: DIE WELT NEU DENKEN (“Thinking of the World”).

The Proof quality coins are available as separate purchases and will also be available as a set towards the end of the year. This set will include all five €20 silver coins enclosed in a sealed folder and slip-case with colourfully printed images and information about each coin included. The Uncirculated coins are available for their face value at points of exchange such as commercial banks and post offices. For additional information about these coins and others available from the VfS, please visit their website.

As part of the centenary celebrations of the founding of Bauhaus, several events, festivals, and exhibitions are planned around the world in 2019. The international opening festival at the Berlin Academy of the Arts, from the 16th to the 24th January, concentrated on “the presentation and production of pieces by contemporary artists, in which the aesthetic issues and experimental configurations of the Bauhaus artists continue to be inspiringly contagious.”

Germany: Centenary anniversary of the constitution of the republic remembered on new colour and silver coins