The State Mint Sales Department of the German Finance Ministry and Munze Deutschland will shortly release new silver commemorative coins which are in observance of the 900th year of the founding of what has grown into Germany’s fourth-largest city. Officially Freiburg im Breisgau, this is an independent city within the state of Baden-Wurttemberg. The city began as a settlement referred to as Freien Burg (or “Free Castle”) that was built in 1120 by Konrad von Zähringen, the brother of the once ruling Duke Berthold III. The Duke and Konrad von Zähringen granted the settlement free-market rights, essentially meaning the town could set itself up as a centre for trade.

The City of Freiburg was inherited many times during its early history, from the dukes who ruled under the House of Zähringen to the House of Urach. Finally, in 1368, the city and citizens of Freiburg actually purchased themselves from Freiburg’s last Duke Egino III (ruled 1358–1368) and turned itself over to the protection of the House of Habsburg, which allowed the city to retain a considerable measure of freedom. Of particular importance for Freiburg was the discovery of large deposits of silver in Mount Schauinsland, which would provide an essential source of capital for Freiburgers. The mined silver made Freiburg one of the wealthiest cities in Europe, and in 1327 Freiburg minted its own coin, the Rappenpfennig. 50 years later, the cities of Freiburg, Basel, Colmar, and Breisach entered into a monetary alliance known as the Genossenschaft des Rappenpfennigs (“Rappenpfennig Collective”), which would last remarkably until the end of the 16th century. At its height, the silver dividend benefitted Freiburg to the extent that by the middle of the 14th century, the thriving city was home to nearly 9,000 people. Unfortunately, with the silver having been exhausted from the mines, Freiburg’s population declined to around 6,000 by 1460, and with their departure, so went the city’s prosperity. However, as Freiburg had also evolved into a university city, they refocused their attention from mining to education. It was Albrecht VI of Habsburg, regent of Further Austria, who established the Albert-Ludwigs-Universität in 1457, which is now one of Germany’s oldest universities still in existence. 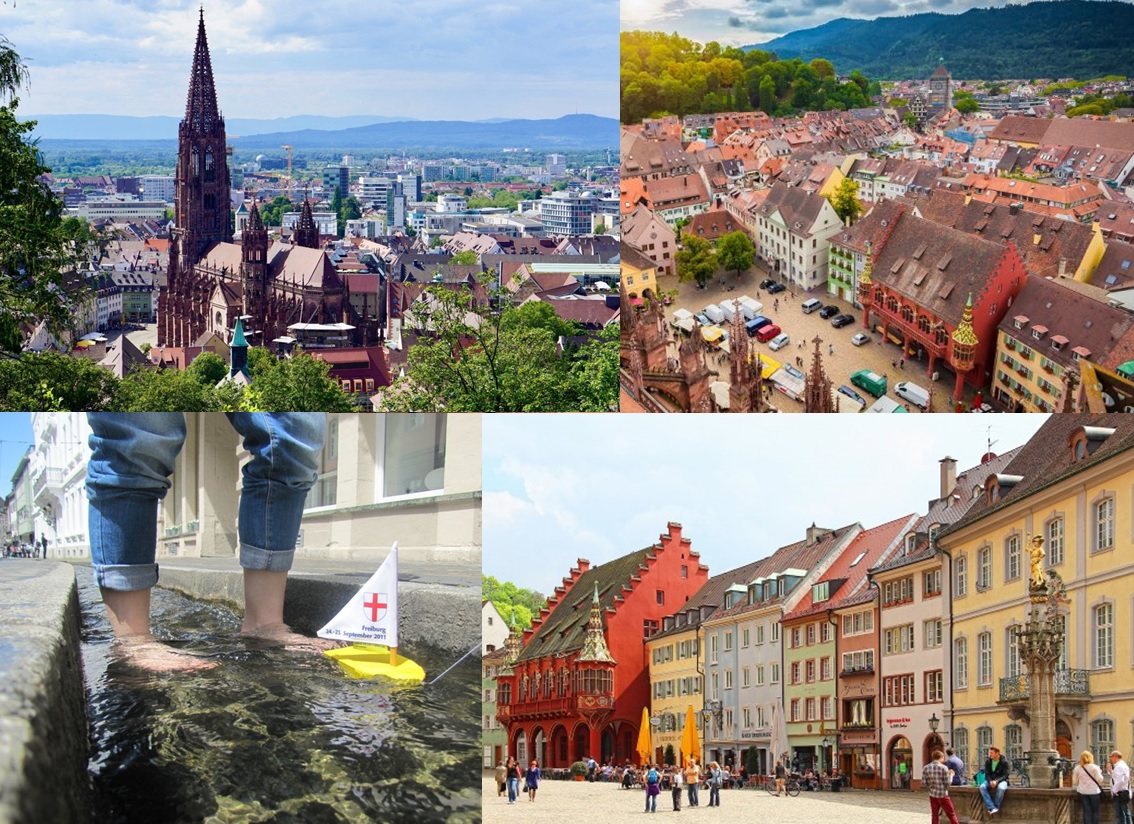 Today, because of its scenic beauty, relatively warm and sunny climate, and easy access to the Black Forest, Freiburg is a hub for regional tourism. Of particular interest is their unusual system of gutters known as Freiburg Bächle. They ran throughout its town centre and were once used to provide water to fight fires and feed livestock. They are still constantly flowing with water diverted from the Dreisam and were never intended to be used for sewage or waste. Freiburg’s beautifully preserved Old Town Square retains some of the city’s original structures and historical architectural treasures and has become a prime tourist attraction.

The coins are produced by the State Mints of Baden-Wuerttemberg and are designed by Bastian Prillwitz from Berlin. His obverse design includes a charming collage of representations of Freiburg, which depicts the Freiburg Minster, the historic department store, and the Martin Gate, these effectively represent a large number of historical buildings that characterise Freiburg’s landscape of sights. Grapes, vineyards, and the Schlossberg Tower reflect the city’s closeness to nature. Also represented is the Freiburg Bächle, which runs through the entire old town along with a toy boat often seen in these unusual canals. In the middle are citizens of Freiburg in front of the city’s coat of arms. Above the primary design is the inscription 900 JAHRE. The reverse side includes the image of a stylised eagle, a symbol of the German Federal Republic, along with the coins’ denomination of 20 EURO and the year of issue, 2020. Above the eagle is the designation of 925 SILBER and to the lower right, the mintmark “G,” denoting the Baden-Wuerttemberg Mint. The design is surrounded by 12 stars representative of the European Union. The smooth edge of the coin includes an incused inscription that reads DER BUERGER WOHL SEI OBERSTESGESETZ + (“the citizens will be the primary law”).

The Prooflike quality coins are available from the 9th July for their face value at commercial banks and post offices and in Proof quality directly from Munze Deutschland. For additional information about this coin and other coins released by the Department of the German Finance Ministry and Munze Deutschland, please visit their website.