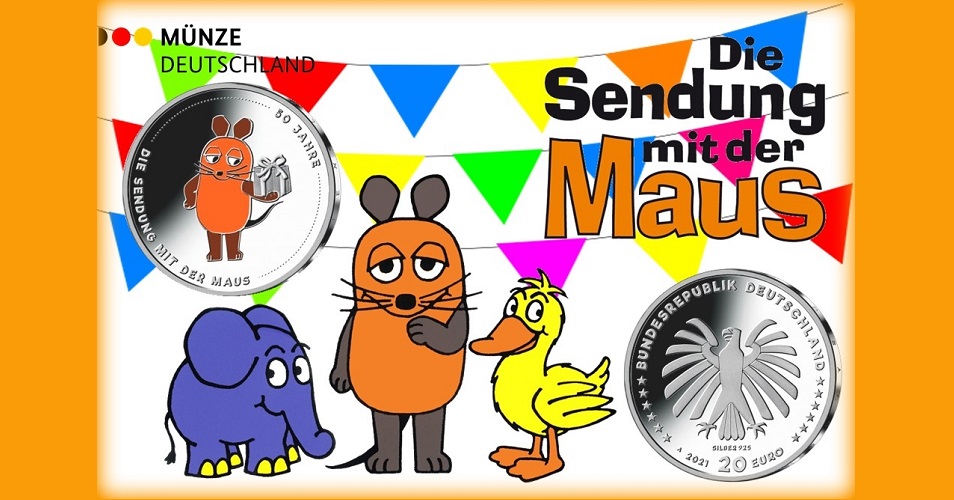 The German Ministry of finance — Munze Deutschland has released (25th February) new silver €20 commemorative coins in tribute to one of the country’s most enduring and respected children’s television shows, which, this year, celebrates 50 years on air.

Die Sendung mit der Maus, quite simply, “The Show with the Mouse,” is a children’s series on German television that has frequently been called “the school of the nation” and compared to America’s Sesame Street. Since its first airing on the 7th March 1971, the show has often been praised for tackling serious subjects in a manner that educated and informed but didn’t scare or upset its young audience. Serious topics, such as the Chernobyl disaster in the late 1980s or how life was lived in Post-War II Germany were discussed on the 50th anniversary of the end of the war in 1995.

The basic concept was relatively simple which, for one half hour, animated stories alternated with documentary-style educational segments that included a wide range of real-world topics that were presented in a child-friendly delivery. The show was hosted by a confident and clever orange and brown mouse, along with his more excitable friends Elefant and Ente the duck. They open each show and appear throughout in short interstitial animations and are colloquially called “Mausspots.”

Due to the show’s longevity, Die Maus remains very popular amongst young and old alike, owing its continuous existence since 1971 and to a high-quality mix of education and entertainment. Hosted by moderator Christoph Biemann who is dressed in his familiar green pullover, the theme song was also as familiar to every child in Germany more than any other score of music. Whenever the song was heard every Sunday morning at 9:25 a.m., parents would often join their children to see what was discussed and usually continue to talk about various subjects afterwards. Many German parents have credited the television show, the Maus, and his friends with encouraging generations of inquisitive youngsters as well as providing credible and sensible answers to many questions — some complex, others mundane. Short films about contemporary subjects have also been included which teach young people about ecology and environmental sustainability — a popular topic with both parents and their children. A familiar topic in today’s world instructs about technology abuse, online bullying, and becoming addicted to smartphones. Ultimately, the popularity and longevity of the show comes down to the little maus who is able to remove his tail in order to jump rope and has endeared himself to a nation for the last half a century.

The sterling silver Proof coins with applied colour are produced by the Staatliche Münze at their facilities in Berlin. The obverse side includes a very familiar image of der Maus, created by WDR mediagroup GmbH, holding a small wrapped gift in his left hand. Text placed to the left and along the lower edge reads DIE SENDUNG MIT DER MAUS, along with an additional inscription 50 JAHRE placed in an opposite position.

The reverse side includes a stylised eagle centred which is the work of graphic artist Andre Witting. The denomination of the coin is seen underneath the eagle along with the year of issue. The mintmark A, which is next to the year, indicates the Berlin Mint.

The Prooflike pieces are available for their face value at leading commercial banks and post office counters. The Proof-quality collector’s edition is available by visiting the website of Munze Deutschland.

*Towards the end of the year, the entire €20 Proof quality collection consisting of five 2021-dated coins, including Die Sendung mit der Maus, will be available as a set and presented in an official blister-pak type folder.