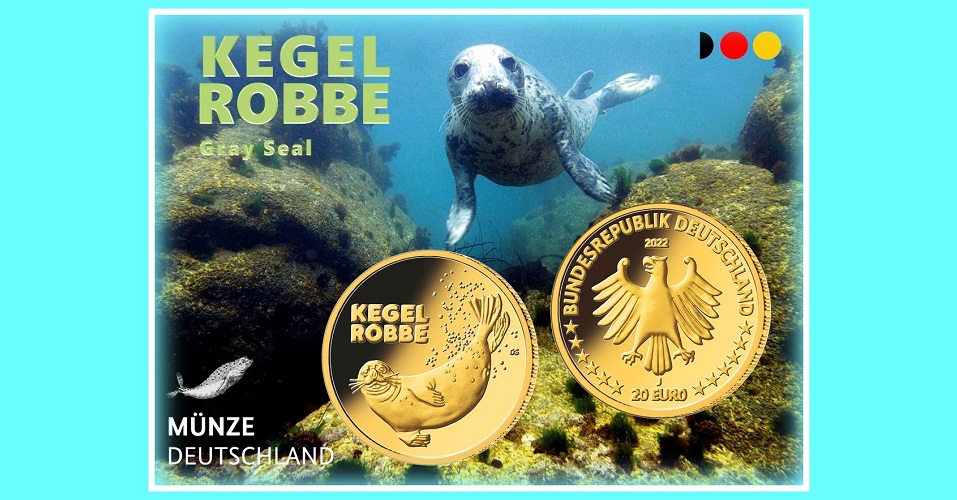 The German Federal Republic’s Ministry of Finance, along with Munze Deutschland, have unveiled both a new coin series and designs for the €20 gold coin denomination. Entitled “Return of the Wild,” the coins will feature various species of animals in Germany that have successfully returned to their habitats with careful conservation and ecology.

A relevant topic of our times, the return of wild animals to their original habitats points to the considerable success of species protection in Germany. In the middle of the 20th century, hardly anyone would have thought it possible that in our densely populated cultural landscape wild animals which had almost been pushed out could find new habitats. For centuries, the grey seal was fought by fishermen as a pest until it almost completely disappeared from the German coasts in the middle of the 20th century. In the 1990s, the grey seal was placed under protection and a ban on hunting was enforced. In addition, pollution with environmental toxins in their natural habitats decreased and as a direct result, the population of grey seals was able to recover.

In 2020, and as a measure of success, more than 7,600 grey seals were counted in the German, Dutch, and the Danish Wadden Sea. In Germany’s Baltic Sea coasts where the grey seal had completely disappeared, there are now between 200 and 300 animals. The Baltic Sea population currently totals around 25,000 grey seals. Conservation and a sustainable balance of sufficient food, suitable birthing sites, and resting areas have realised surprising but positive results. The grey seal is a perfect symbol of successful nature conservation, and thus is an ideal start for the series “Return of the Wild Animals.”

Designed by the artist Olaf Stoy, the motif of these new 20-euro gold coins depicts the grey seal in its ideal element, water. Cheerful and full of vigour, this female grey seal seems to dive into the depths, pulling air bubbles behind her and with her glance looking directly at the viewer. Together with block-like lettering, the name KEGELROBBE (“Grey Seal”) contrasts excitingly with the dynamic movement of the animal. The reverse side depicts a stylised eagle centred with similar block-like lettering which reads BUNDESREPUBLIK DEUTSCHLAND placed directly above.The coins’ denomination of 20 EURO and the mintmark Berlin (A), Munich (D), Stuttgart (F), Karlsruhe (G), or Hamburg (J) is placed below the eagle. Also incorporated into the design are 12 stars, six on each side of the eagle, which represent the European Union. The year of issue 2022 is shown just above the eagle.

Munze Deutschland reminds collectors the order deadline for placing reservations is from the 4th April to the 16th May 2022. Thereafter, the official date for this coins’ release is the 20th June and dispatch will follow shortly after this date. Each coin is encapsulated and accompanied by a certificate of authenticity. For additional information, please visit here.

The second issue for 2023, part of the “Return of the Wild” series, has already been decided. The ibex will feature on the next 20-euro gold coin.