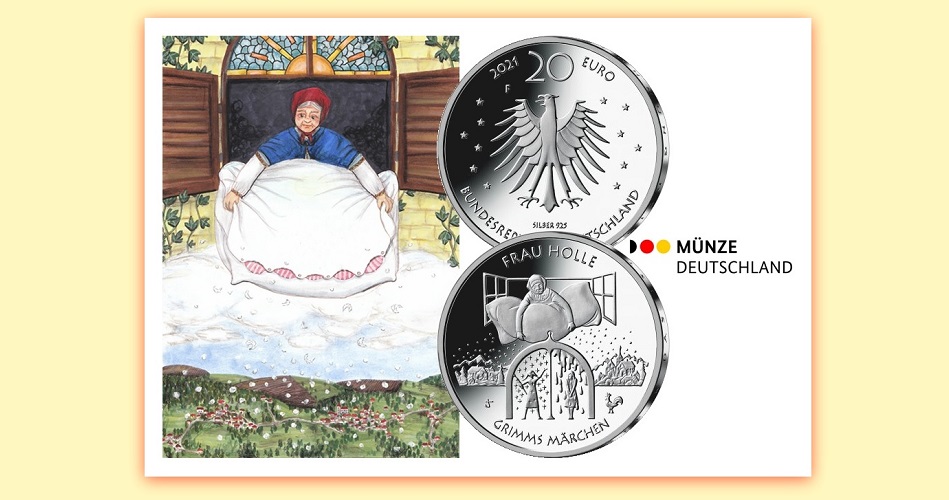 The State Mint Sales Department of the German Federal Ministry of Finance and Munze Deutschland will release (21st January) the first silver €20 commemorative coins for 2021 which continue the series “Grimms’ Fairy Tales” begun in 2016 and features a popular story entitled “Frau Holle.”

When it snows, it only means Frau Holle is shaking out her blankets vigorously.

This saying is based on the well-known fairy tale entitled “Frau Holle” by the brothers Jacob and Wilhelm Grimm. This and a host of other fairy tales were published in the famous collection of children’s tales in the early 19th century. Many of these narratives come with fantastic and terrifying elements, with the focus usually being on the moral message of each fairy tale.

The unnamed heroine of the story, Frau Holle, is a young girl who lives with her unmannerly widowed stepmother and her lazy step-sister.

The coins are produced by Germany’s Staatliche Münzen Baden-Württemberg, at their facilities in Stuttgart, and are designed by the artist Jordi Truxa of Neuenhagen. The obverse’s primary design shows the kindly Frau Holle shaking her bedclothes out of a window, feathers flying, and just below the young girl stands under the arch, being rewarded with gold while her step-sister is rained upon. Above the primary design is the text FRAU HOLLE and below the design is the name of the coin’s series, GRIMMS MARCHEN. The reverse side includes the image of a stylised eagle, a symbol of the German Federal Republic, along with the coins’ denomination of 20 EURO and the year of issue, 2021, just above. To the left is the coin’s mintmark of F, denoting the Mint of Stuttgart. Below the eagle is the designation of 925 SILBER and BUNDESREPUBLIK DEUTSCHLAND. The design is surrounded by 12 stars representative of the European Union. The smooth edge of the coin includes an incused inscription that reads DAS IST ZUR BELOHNUNG DEINER DIENSTE * (“THIS IS TO REWARD YOUR SERVICES *”).

The Uncirculated versions are available for their face value of €20 from post offices and commercial banks. The Proof strikes are available as a separate purchase from Munze Deutschland — official distributors. For additional information about these coins and other coins released by the Department of the German Finance Ministry and Munze Deutschland, please visit their website.

Germany: Silver Proof coins celebrate 900 years of the founding of the city of Freiburg