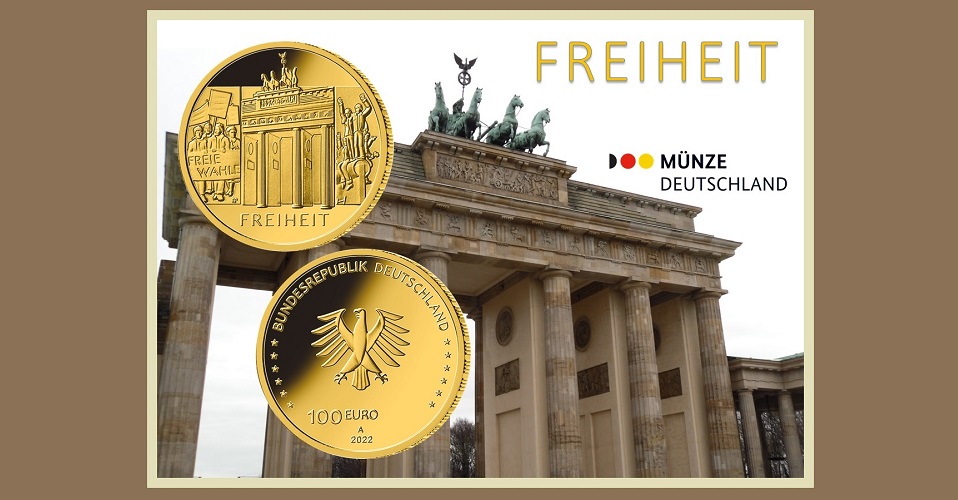 The German Federal Republic’s Ministry of Finance, along with Munze Deutschland, have unveiled the final design which is part of a €100 gold three-coin programme highlighting the pillars of democracy. These central concepts of German democracy have shaped the elementary values ​​of the Federal Republic of Germany. They are enshrined in the Basic Law and are sung as part of the national anthem: Unity, justice, and freedom. These pillars characterise the essential basics of the German constitution and identity based on the rule of law. The “Pillars of Democracy” series comes to a dignified conclusion with the last €100 coin focusing on freedom and the defining element of this basic right for many Germans is the Brandenburg Gate.

Once the symbol of division for nearly 50 years after the Second World War, this landmark emerged as the symbol of the quest for unity. The Brandenburg Gate has in the decades since German unification become the symbol of freedom throughout the world. Built in the Classicist style at the end of the 18th century, the former city gate is now Berlin’s best-known landmark and during the division of Germany has reflected the eventful German history like no other structure. When the Berlin Wall was built in August 1961, the Brandenburg Gate stood in a restricted area and could not be passed through from either the west or the east. It thus became the focal point of the era known as the Cold War, and a focal point for the hope that this state division might one day be overcome. Triggered by the peaceful revolution in the German Democratic Republic, commonly referred to as East Germany, this wish became reality when the wall came down in 1989.

As with the first two designs “Unity” and “Justice,” the motif of the final €100 gold coin, “Freedom,” is the work of the artist Bastian Prillwitz from Berlin. The central idea of ​​all three coins is a particular building which represents the depicted theme and is supplemented by related scenes and figures. While Frankfurt’s Paulskirche stands for “unity” and the Federal Constitutional Court in Karlsruhe stands for “law,” the Brandenburg Gate symbolises “freedom.” It is flanked by scenes of the revolution in the German Democratic Republic and the fall of the wall. The reverse side is designed by artist Andre Witting of Berlin and includes a stylised eagle centred with corresponding lettering which reads BUNDESREPUBLIK DEUTSCHLAND, and is placed above and around the eagle. The coins’ denomination of 100 EURO is shown off-centred and towards the left with the mintmark Berlin (A), Munich (D), Stuttgart (F), Karlsruhe (G), Hamburg (J), and the year 2022 placed below the eagle. Also incorporated into the design are 12 stars, six on each side along the edge representing the European Union.

The timeline to place an order with Munze Deutschland is from the 4th April to the 16th May 2022. The coin itself is officially released on the 4th October. Each coin is encapsulated and enclosed in a custom case accompanied by a certificate of authenticity. For additional information, please click here.