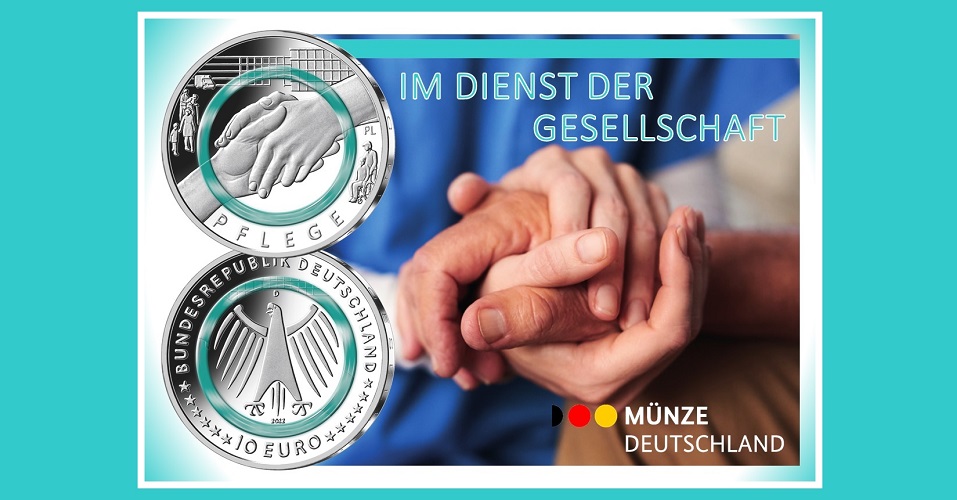 The German Federal Republic’s Ministry of Finance and Munze Deutschland have unveiled the first coin in a new series beginning this year with the theme “In the Service of Society.” This will focus on particular groups of people who are indispensable for those affected by emergencies regarding safety and health, but also for the functioning in our society as a whole from disasters both natural and man-made. The first coin in the series focuses on the service of care in the community, from nursing to at-home care and paramedics.

The activity of health care is as old as mankind and the profession more relevant than ever. The profession for many has become a vocation and numerous people throughout the years and centuries have contributed to the advancement of nursing and the regard it has earned. Early health care pioneers such as the German Pastor Theodor Fliedner, who founded an association for Christian nurses. His activities had a direct impact on a person whose name has been closely linked to the nursing profession like no other: Florence Nightingale. In the 19th century, the British woman revolutionised nursing, arguing that in addition to medical knowledge, one must also be familiar with specific nursing knowledge. Her writings essentially founded modern nursing science. Her work also as a statistician and health care reformer preserved her writings for history. In Germany, another woman supported the nursing profession, and her name was Agnes Karl. After nursing for a prolonged period of time in Fliedner’s Christian nursing order, she created the basis for non-denominational nursing, coining the quote “Care is an art.”

The motif shown on the obverse is designed by graphic artist Peter Lasch from Berlin, who highlights the complex areas of responsibility of modern health care. In the centre of the design, two hands are clasped: One hand of a person to be cared for, the other by the carer. They stand for protection, trust, and warmth. Below the design is the inscription PFLEGE (“CARE”). The reverse side depicts a stylised eagle centred with the year of issue 2022 placed just under and the denomination of 10 EURO shown below the eagle. The issuer BUNDESREPUBLIK DEUTSCHLAND is placed along the top edge. On the outside of the polymer ring are 12 stars representing the European Union arranged as six stars on each side in a semi-circle. The incused edge lettering reads: IM DIENST DER GESELLSCHAFT (“IN THE SERVICE OF SOCIETY”). A mintmark is shown just above the eagle with all five national mints represented with: Berlin (A), Munich (D), Stuttgart (F), Karlsruhe (G), and Hamburg (J).

Every coin in the series and its specific focus will be represented by a particular colour for an occupational group. For instance, the first coin starts with coins that include a dark turquoise green ring in what is associated with the surgical scrubs worn by emergency medical personnel.

The coins are available from the 7th April either individually or by subscription. Each coin is encapsulated and presented in a card folder. For additional information, please click here.