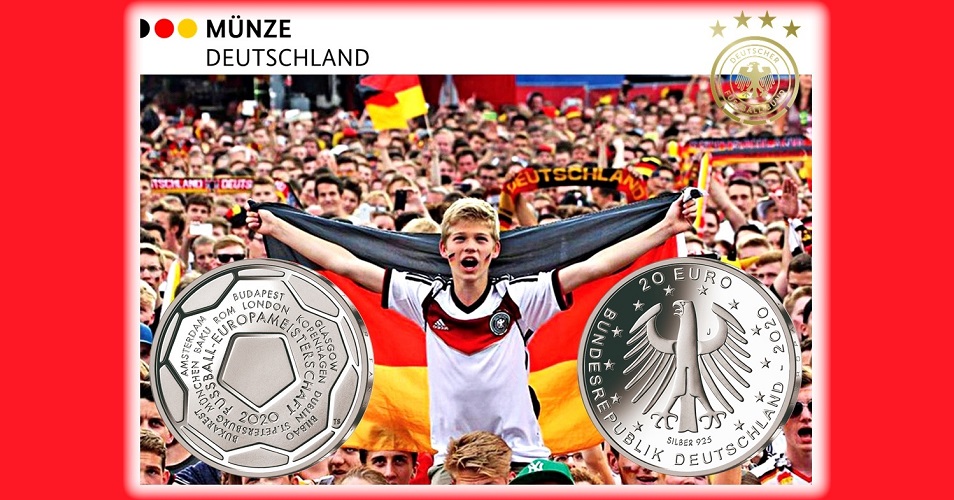 The opening match of the UEFA tournament will commence on the 11th June, which starts promptly at 9:00 P.M. Central European Time (CET) in Rome’s Stadio Olimpico. The match will see hosting Italy compete against the national team of Turkey. The German team, one of the tournament’s favourites who go into action for the first time on the 16th June at 9:00 P.M. CET in the Allianz Arena in Munich, will meet the national team of France. In total, 24 teams will play 51 games over the one-month time frame with the grand finale being held on the 11th July at the venerable Wembley Stadium in London.

The 2020-dated collector coins are produced by the Hamburgische Münze at their facilities in the city of Hamburg, on behalf of the German Ministry of Finance, and are designed by Thomas Serres of Hattingen (obverse) and Erich Ott of Munich (reverse). The design shows the whole surface of the obverse encompassing the image of a football, the contrasting strike of frosted relief and polished recesses enhancing the distinctive appearance of a football or soccer ball. Included are the names of all 12 European cities that will host some of the 51 games scheduled:

The commemorative inscription, which is in the centre of the listed cities, reads FUSSBALL — EUROPAMEISTERSCHAFT 2020 (“Football — European Championship 2020”).

The reverse depicts a stylised eagle centred with the coins’ fineness of SILBER 925 placed below the eagle. The denomination of 20 EURO is shown above the eagle and the issuer BUNDESREPUBLIK DEUTSCHLAND 2020 is placed below along the edge. Between the eagle and text are 12 stars representing the European Union arranged in a circle. The incused edge inscription reads: EIN TURNIER FUER EUROPA• EIN TURNIER FUER FANS• (“A TOURNAMENT FOR EUROPE • A TOURNAMENT FOR FANS •”).

The Brilliant Uncirculated pieces are available for their face value at leading commercial banks and post office counters. The Proof-quality collector’s edition is available by visiting the website of Munze Deutschland.

*Towards the end of the year, the entire €20 Proof quality coin collection consisting of four 2021-dated pieces and the delayed 2020-dated Football Championship coin will be available as a set and presented in an official blister-pak type folder.

Germany: Deadline of May 17th approaching to order 2021-dated gold coins in time for their release dates