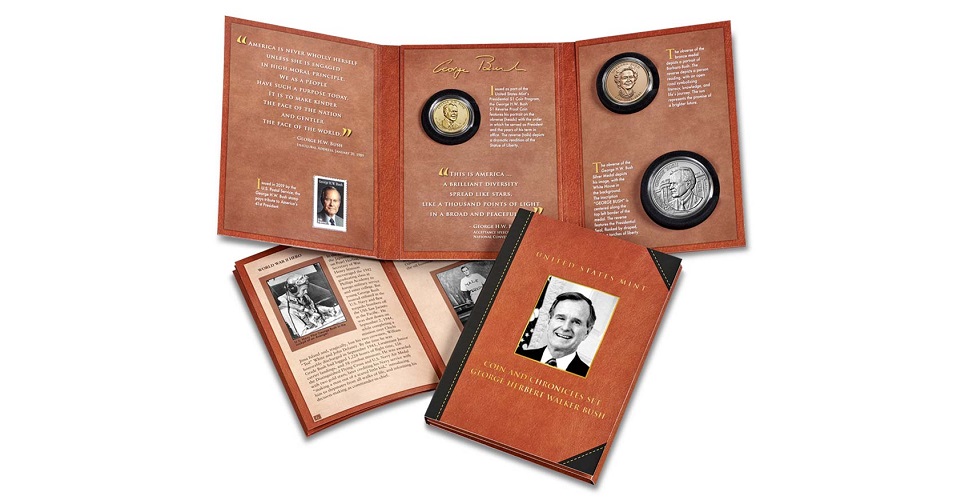 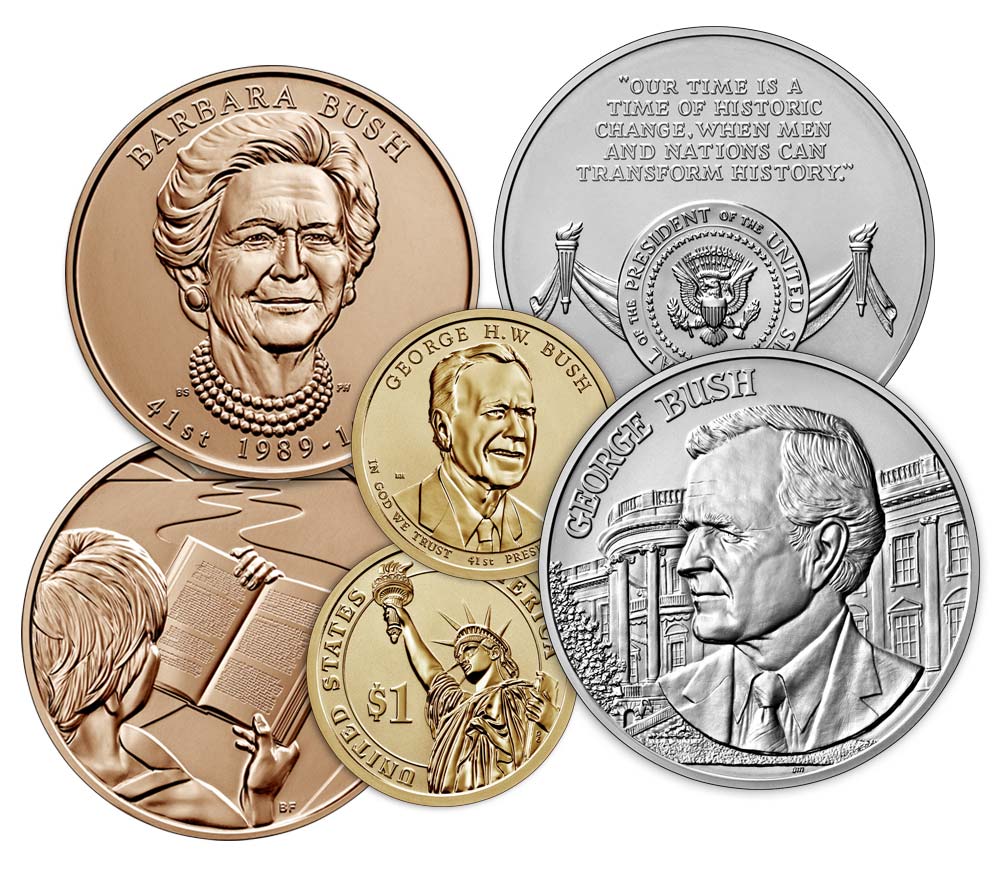 The $1 coin, silver medal, bronze medal, and stamp are displayed in a custom-designed folder with slip case. The certificate of authenticity is printed on the back of the packaging.

The coin’s reverse (tails), designed and engraved by former Mint Lead Engraver Don Everhart, depicts a striking rendition of the Statue of Liberty, with the inscriptions UNITED STATES OF AMERICA and $1., 2020, S (mint mark), and E PLURIBUS UNUM incused on the coin’s edge.

The Presidential silver medal is 99.9 percent silver and features the same designs as the Bush Presidential bronze medal. Designed and engraved by former Chief Engraver John Mercanti, the obverse features the President’s portrait with the White House in the background. The inscription GEORGE BUSH is centered along the top-left border.

The medal’s reverse was designed and engraved by former Medallic Artist Chester Martin. The design depicts the Presidential Seal, flanked by draped, burning torches of liberty. The inscription OUR TIME IS A TIME OF HISTORIC CHANGE, WHEN MEN AND NATIONS CAN TRANSFORM HISTORY is centered at the top of the medal. The inscription INAUGURATED JANUARY 20, 1989 is centered along its lower border.

The Barbara Bush First Spouse bronze medal bears the same central image as the First Spouse gold coin issued in her honor. The obverse depicts a portrait of Mrs. Bush with the inscriptions BARBARA BUSH, 41st, and 1989-1993. The design was created by AIP Designer Benjamin Sowards and sculpted by Mint Medallic Artist Phebe Hemphill.

The reverse depicts a person reading, with an open road symbolizing literacy, knowledge, and life’s journey. The sun represents the promise of a brighter future. The reverse design was created by AIP Designer Barbara Fox and sculpted by former Mint Medallic Artist John P. McGraw. 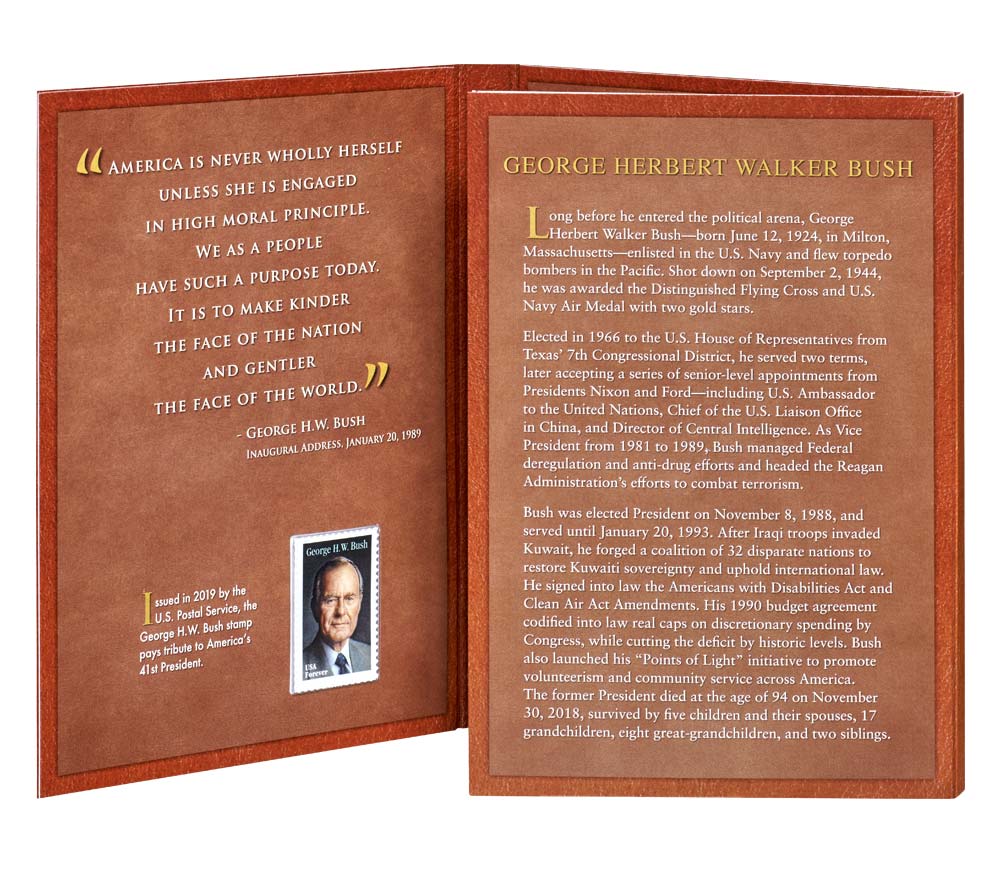 The George H.W. Bush Coin and Chronicles Set is priced at $120. Production is limited to 35,000 units, with orders limited to one per household for the first 24 hours. To set up a REMIND ME alert, visit here (product code 20PA). This product will not be offered through the Mint’s Authorized Bulk Purchase Program. 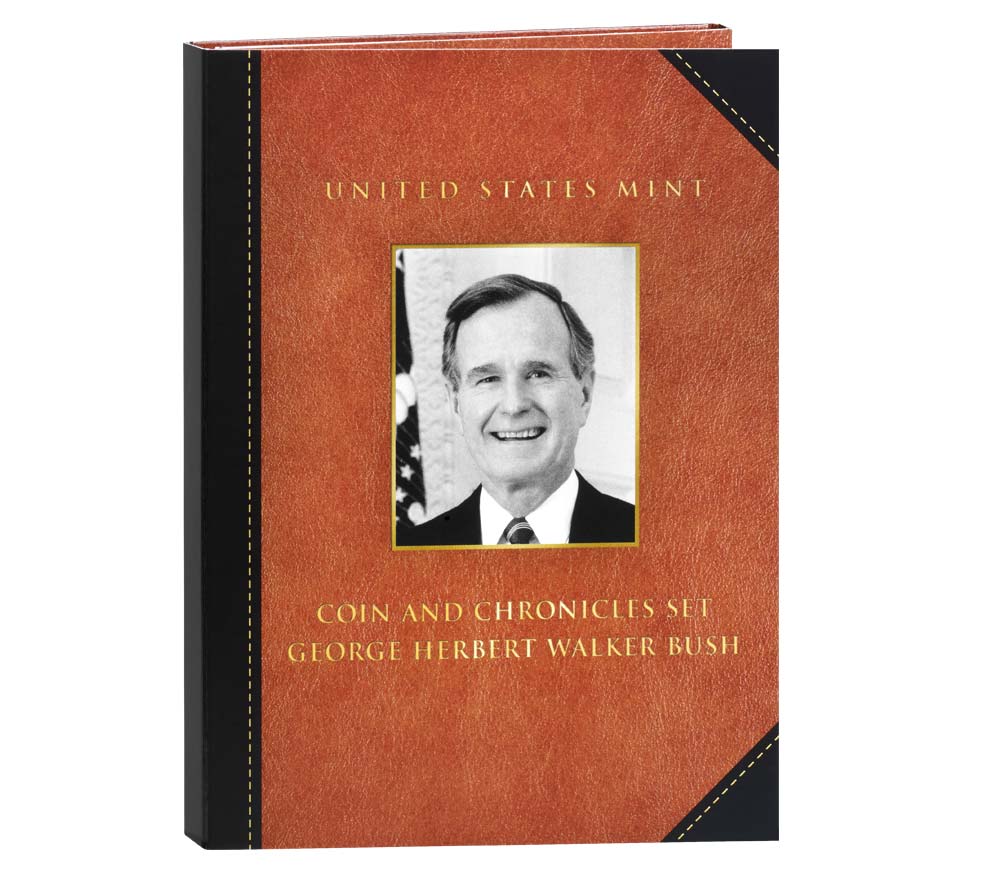 Note: To ensure that all members of the public have fair and equal access to United States Mint products, the United States Mint will not accept and will not honor orders placed prior to the official on-sale date and time of September 17, 2021, at noon EDT.