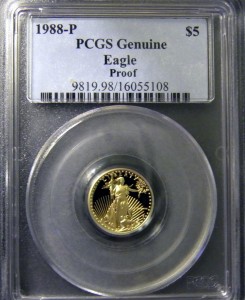 Before NGC started slabbing problem coins, citing details like cleaning or questionable color, it used to send too many of my coins back in so-called body bags, flips noting why a coin was not holdered.

Back then I would submit through my local dealer, and it seemed every fourth coin was returned without a grade.

I was so frustrated by the expense that I successfully persuaded the dealer to become a PCGS authorized agent so that he could submit to that company. He did that.

For months afterward we’d send coins exclusively to PCGS. I also enrolled in its set registries, even though most of my coins were NGC at the time and PCGS (unlike NGC) doesn’t allow its rivals holders to be included in competitions.

Moreover, I sent several of my Morgans in NGC holders to PCGS, even though a few did not cross and some were downgraded numerically. I was excited at the prospect of a collection in PCGS holders.

About this time both NGC and PCGS started slabbing so-called problem coins. NGC noted the problem on its label; PCGS labeled such coins “Genuine” and used a numerical code to explain the reason. I also started submitting coins directly to both companies.

During the past year, however, I started noticing several of what seemed like perfectly gradable coins being returned by PCGS as “Geniune.” Modern coins might have had a bag mark or bright toning. Older coins, particularly ones with slide marks (caused by plastic in Dansco and similar albums), were being returned as “cleaned.” So were dipped coins that still had sufficient luster.

Today I took an inventory of my recent PCGS submissions–24 already this year with more than 80 coins–and figured the percentage of ones being returned as “Genuine.”

Keep in mind I’m an experienced numismatist. I purchase raw coins carefully, rejecting ones with any sign of artificial color, cleaning, tooling, and other more obvious problems (“coin doctoring” included).

Some 20% of 80-plus coins came back as “Genuine.” When I eliminated NGC and other grading company crossovers, more than 26% of those raw coins were returned as non-gradable.

Of course, PCGS graders are world-class and their standards are rigorous, resulting in a premium for coins in its holders. I realize that. Conversely, I also realize that a light dip or slide or bag mark should not disqualify a coin. That is why I am genuinely concerned about PCGS and sharing those concerns in Coingrader Capsule. 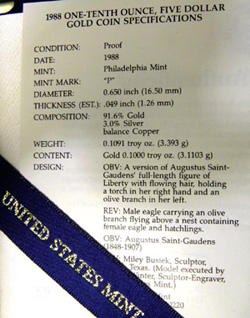 Case in point: PCGS graded as “Genuine (98 – Damage or Tooling)” an 1988 $5 Proof Gold Eagle that came right out of the box, and the box was kept for years in a bank box in the U.S. Mint’s protective capsule and cushioned case. The only light of day that coin saw was when I carefully removed it from its capsule to the flip, wearing cotton gloves.

Yes, I saw a minscule bag mark on the obverse field. But that should have resulted in an appropriate grade, not a 98 Damage or Tooling.

Who would want to keep a coin labeled like that? The coin is magnificently lovely in all respects, except for a tiny ding.

I sent the coin to NGC and it came back PF67 Ultra Cameo, perfectly acceptable. 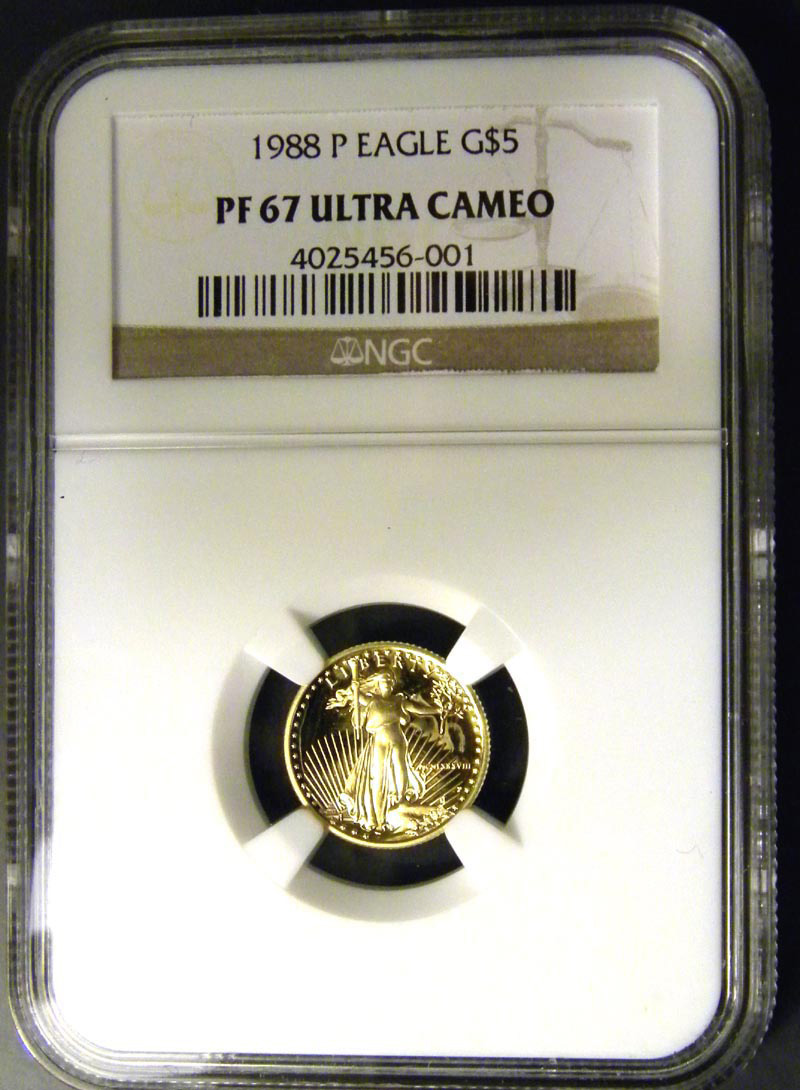 I’m not sending the holdered coin in the “any grade” category to PCGS, even though I suspect that doing so would result in a slightly lower grade. My intent is not to embarrass what I used to call “my company.”

However, as a result of that particular Genuine, I will cease adding coins to my $5 gold set registry. And if one quarter of all my raw coins in other denominations keep being returned as “Genuine,” I’ll cease my set registries there, too.

Make no mistake: I’m not asking PCGS to stop being rigorous. Neither do I think it is being disingenuous in labeling so many Genuine coins. My suspicion, which I cannot verify, of course, is that graders are becoming ever so much more wary about submissions ever since the coin-doctor lawsuit was filed.

In closing, my sincere hope is that PCGS take into account the result of labeling so many coins as “Genuine” when a lower acceptable grade could be awarded because of slide or bag marks or lack of sufficient luster.

Doing so will be good for business, and numismatics, too.