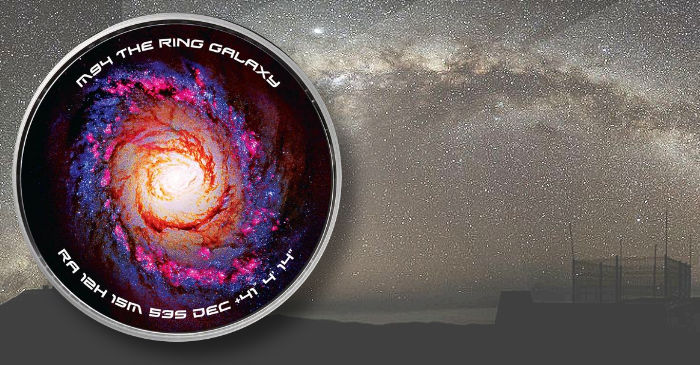 In recent years, the most popular themes on modern world commemorative coins have undoubtedly been ancient mythology and astronomy with different mints producing many such series. But with so many different coins featuring planets, asteroids, space mining, and other topics related to astronomy and cosmology, coming up with something different has become more challenging.

The new Galaxies and Nebulae Spinner Collection of silver rounds that depict various deep space phenomena from the Osborne Mint are just that. I anticipate collectors who love coins on this theme will eagerly embrace the new series, which is unique in several ways.

First, instead of having an artist produce their own rendition of the galaxies and nebulae on its collection of one-ounce silver rounds, they instead feature dazzling color images that were “generated using files downloaded from the Hubble Space Telescope and mated with Earth-based radio telescope data by world-renowned astrophotographer Rob Gendler,” according to the mint. Mr. Gendler is an American amateur astronomer and astrophotographer who specializes in images of deep sky objects using long exposure times and specialized cameras.

This approach makes the images both visually appealing and scientifically accurate. Plus, the series is educational and should encourage collectors to learn more about astronomy.

Second, the pieces feature inscriptions for the name and astral coordinates of the galaxy or nebula depicted using a system of right ascension (RA) and declination (DEC). Together, the coordinates specify the direction of a point in the celestial sphere where the object can be observed.

Third, these rounds are also produced with Osborne Mint’s trademarked COIN-SHOW design digital colorization technique in which the minted coin’s surface shows through to the color layer, which results in realistic-looking images.

Fourth, these rounds were made to be touched, not just displayed and admired. When removed from their capsules and placed on its reverse, colorized side, each round can be twirled around with a circular motion to create a moving, almost hypnotic image of the deep space object depicted (see video below). If you slow the rotation down a little, you will see mesmerizing visual effects unfurl from swirling spirals to pulsating gas clouds and whirling bar galaxies.

In addition, each round has a clear coat of jewelers’ lacquer applied to it so that spinning them using your finger will not damage the surface of the round. They can be easily wiped clean of fingerprints, and the finish should remain the same over time since the coating also retards tarnishing.

The galaxies and nebulae are featured on the reverses of these pieces, while the common obverse shows 3-D images of a spiral galaxy, the Hubble Space Telescope, and a land-based radio telescope, fitting symbols for the subject matter.

Each release is limited to a mere 1,500 pieces in Proof, though additional ones with an Antique silver finish may be coming later if the demand is there. The edge of each piece is engraved with its unique serial number that also appears on the certificate of authenticity that accompanies each round.

The series so far consists of six rounds that depict these galaxies and nebulae: 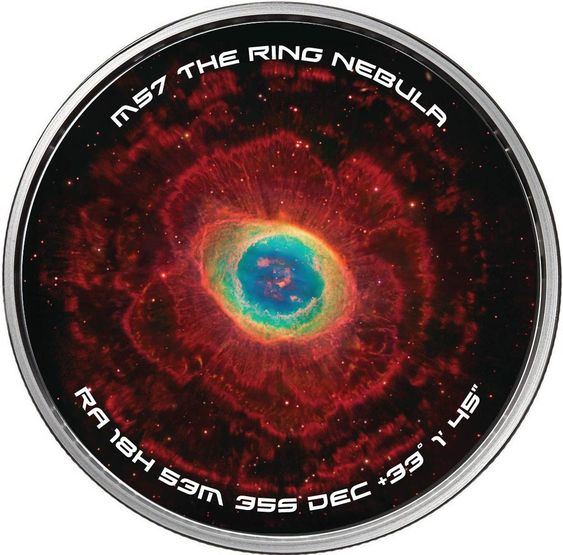 M57 The Ring Nebula: This is a planetary nebula in the northern constellation of Lyra that is the most famous celestial band after the rings of Saturn. 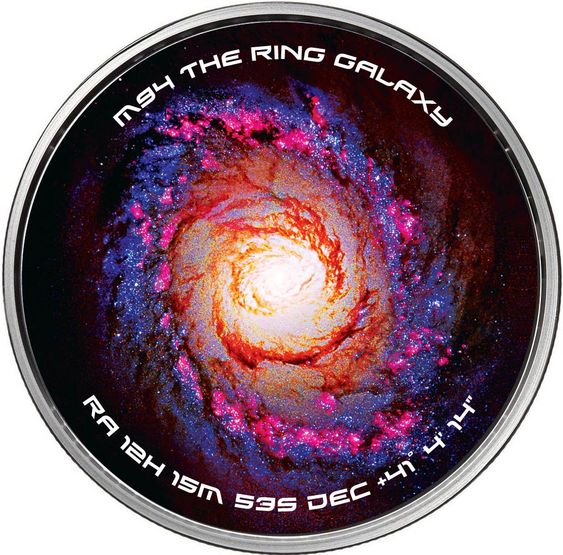 M94 Ring Galaxy Core: A spiral galaxy with two ring structures in the constellation Canes Venatici that was discovered in 1781. Although some references describe M94 as a barred spiral galaxy, the “bar” structure appears to be more oval-shaped. 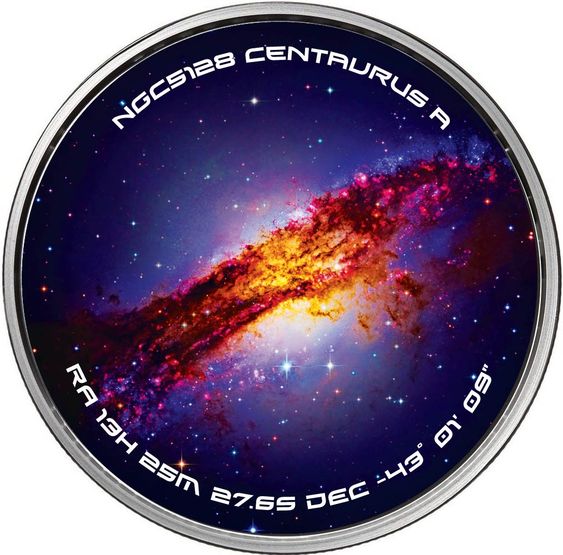 NGC 5128 Centaurus A: This is a galaxy in the constellation of Centaurus that is 13 million light years from earth and was discovered in 1826. 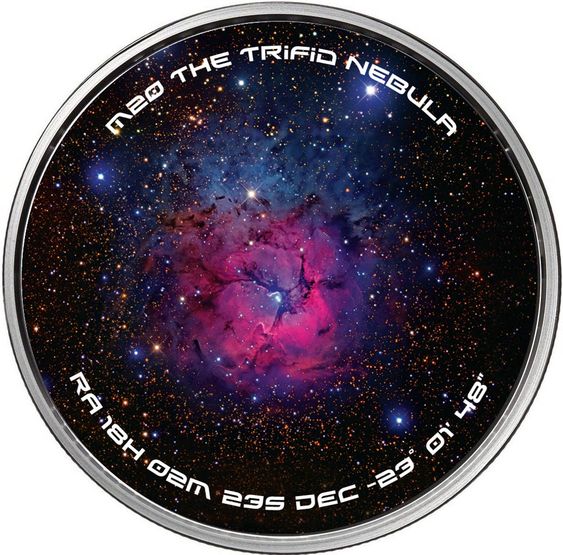 M20 The Trifid Nebula: Located in the Sagittarius area, this object is an unusual combination of open clusters of stars and different types of nebulae and was discovered in 1764. 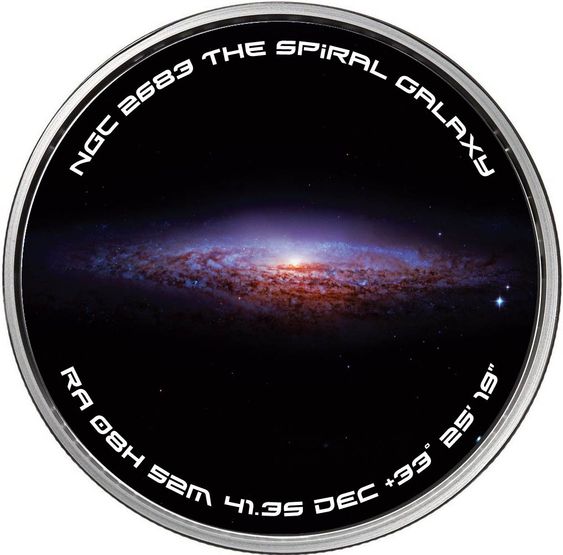 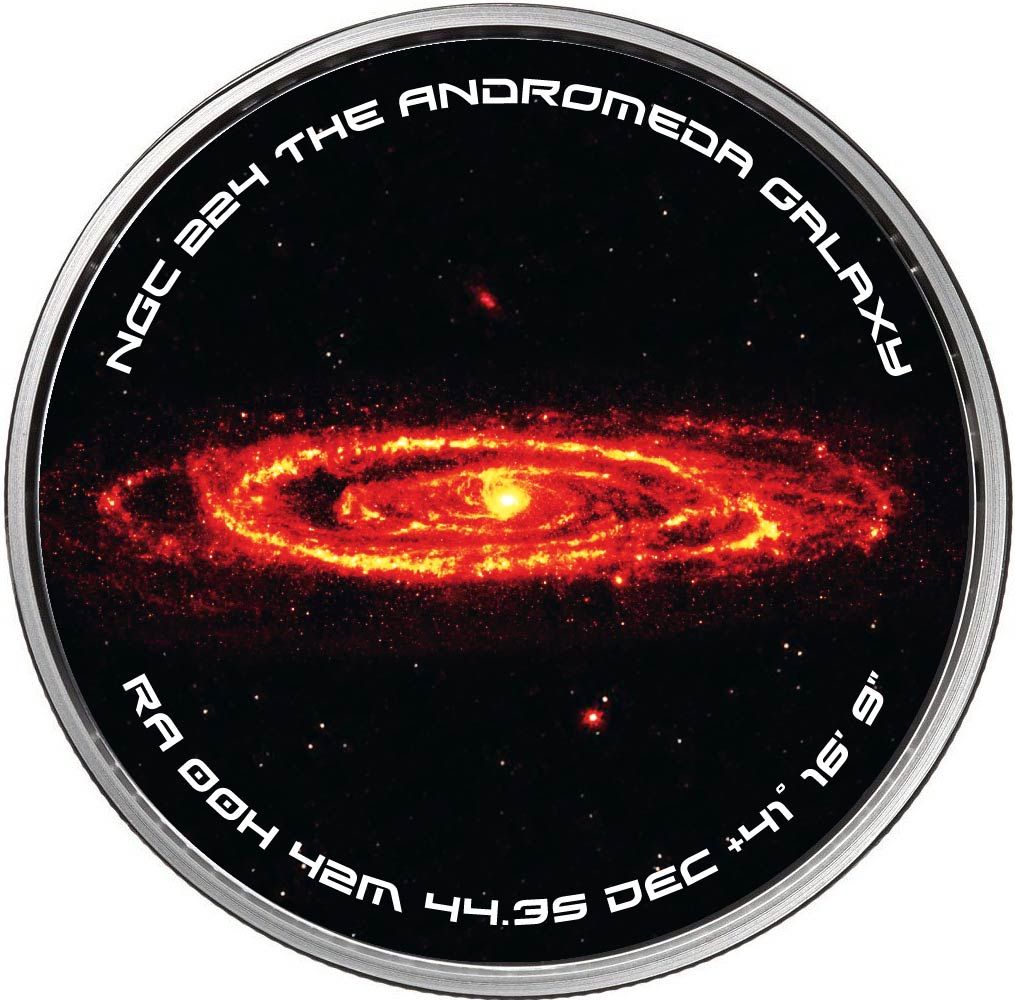 NGC 224 Andromeda Spiral Galaxy: This one is named for the star constellation, Andromeda, in which it appears.

To a large extent, the market dictates what’s available to the public. Wholesalers usually start by offering new programs in both Proof and Antique versions. The Proof is a more traditional numismatic look while the Antique really brings out the details in a design. Since the spinners are a very new invention to most collectors, the wholesalers started with the Proof versions. Over time, great designs and concepts do well enough in the market that additional finishes are offered and sometimes, additional designs.

Collectors also reach out to Osborne Mint directly and request other finishes, other designs. For instance, at the request of multiple consumers, we are about to launch one of our silver hobo nickels in a five-ounce Antique version that had not been offered initially.

Mr. Blumenfeld added that although there are six issues in the series now, with two already on the market (M57 and M94), a seventh is ready to go “in case the market calls for an extension.”

The Osborne Mint, located in Cincinnati, Ohio, is the oldest private mint in the U.S. with a storied history of important contributions to the nation. Its roots date to 1835 when there was no legal tender paper currency, and the U.S. Mint only made Proof coins for collectors from 1836 to 1848.  To help fill the gap created by the shortage of coins, what would become the Osborne Mint was asked to produce gold and brass, and later in 1892, aluminum coins. Then in 1944, it was asked to assist the war effort by producing two billion fiber ration tokens issued to each American family that specified how much meat, sugar, etc. each was rationed daily, which helped to save coinage metals for the war.

Today the mint is best known among numismatists for producing some of the most popular series of silver rounds issued in limited numbers and sold by the leading bullion companies, including, for example, Angels and Demons and Silver Hobo Nickels. It also produces custom silver and copper products on demand. Last year, the mint produced a series of 36 one and five-ounce silver rounds with the art of Art Nouveau founder Alphonse Mucha for the Anonymous Mint.

The mint prides itself on its level of craftsmanship and strict standards for metal purity, weight, and dimensions and produces tens of millions of pieces each year. It also has over 30,000 different dies with some dating from the 1800s.


The new space series from Osborne is being distributed by APMEX and other coin and bullion dealers. APMEX is currently charging about $20 over the spot value of an ounce of silver for each piece, though prices vary depending on where purchased.