The Florida United Numismatists (FUN) show in January is traditionally the start of the new numismatic year. This year, the show is held in Tampa from January 4th to 7th. During the week, various auction sessions are being held in Tampa, as well as the following week in an online-only format. In this preview article, we will take a look at some of the highlights in the U.S. coin and currency sessions. In another article, we will take a look at the world bank notes being sold in Tampa, as well as the world and ancient coins that come up on the auction block the following week during the New York International Numismatic Convention, held at the Grand Hyatt in Manhattan. Details of all lots discussed in this article, as well as all other lots in the auction, can be viewed at the website of Heritage Auctions. 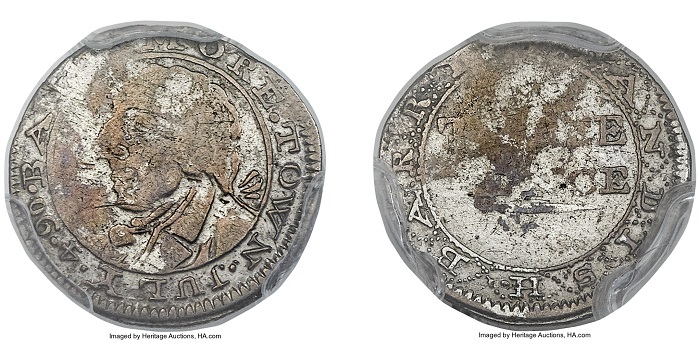 For our first lot, we travel back to Baltimore in the late 18th century, where a local silversmith by the name of Standish Barry took it upon himself to provide much-needed coins for the local economy. Lot 4718 in the Heritage Auction is one of those extremely rare coins, a silver threepence, graded VF-20. Precisely dated July 4th, 1790, these have been known as rarities for over a century and a half, and very few examples appear at auction in any given decade. As the auction description states, Barry was one of two Maryland silversmiths that struck small change coins for circulation during this time period, which was before the United States Mint opened in Philadelphia a few years later. Readily accepted into circulation, about 20 or so are known, including several AU’s and even an Uncirculated example, but since the type is so rare, this VF should also see spirited bidding. 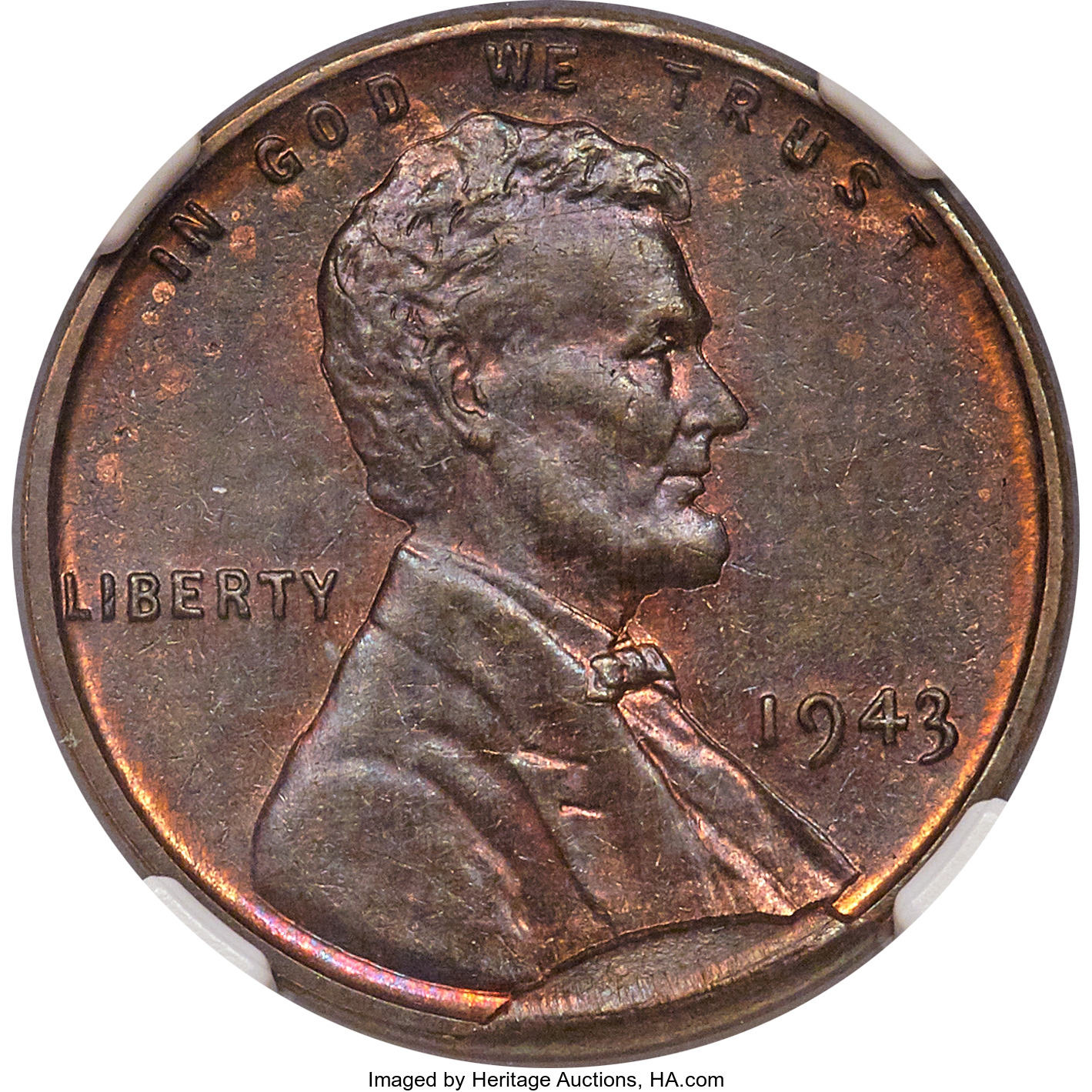 The 1943 Copper Cent is one of the most famous American coins. Inadvertently, a small number of examples meant to be struck on steel planchets were struck on copper planchets of the previous year, creating a much sought after error coin. Lot 4763 in the Heritage auction is an interesting example of this error from the Philadelphia Mint, graded MS-61BN. What makes this particular example unique is the large die break on the bottom half of the obverse, an indication that this die had been in use for quite some time already before this coin was struck. As no other 1943 copper cents are known with this feature, it is obvious they were struck at different times at the Mint, most likely because of pure chance. 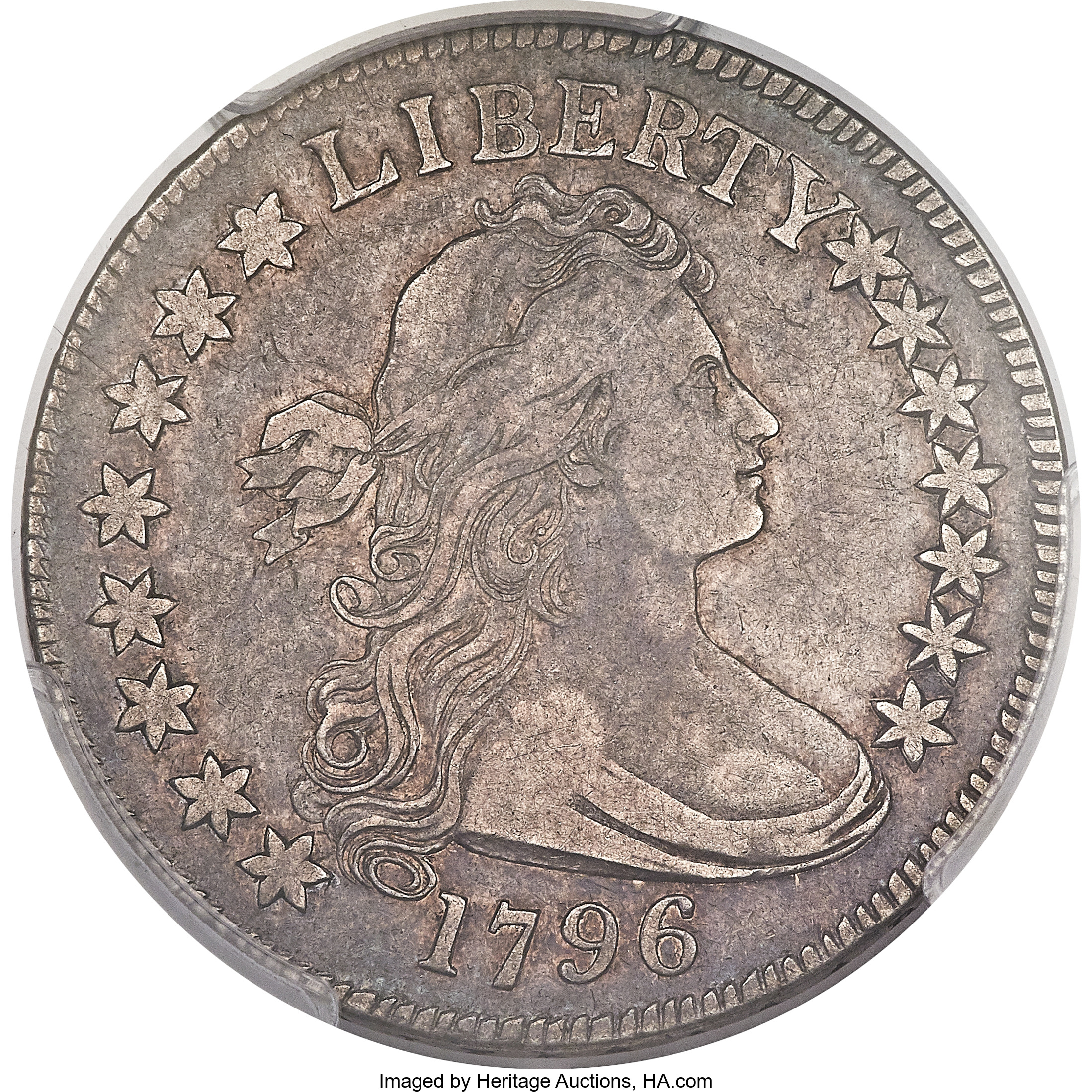 Ever type collector knows what can be considered the key to all United States type coins, the 1796-1797 half dollar with draped bust obverse and small eagle reverse. Struck in minuscule quantities (less than 4,000 over both years combined), this is by far the rarest U.S. coin type and is infrequently offered for sale. Lot 4850 is a very original, problem-free VF-35 example of the 1796 variety with 15 obverse stars. An appealing circulated example of this very rare type, this is one of the nicer mid-grade examples to have appeared at auction in recent years. With less than 1,000 examples of this date minted, most type collectors will probably end up with a 1797, but the 1796 makes for a good type coin as well, as prices are similar (they are so rare that few people collect these by date or variety). 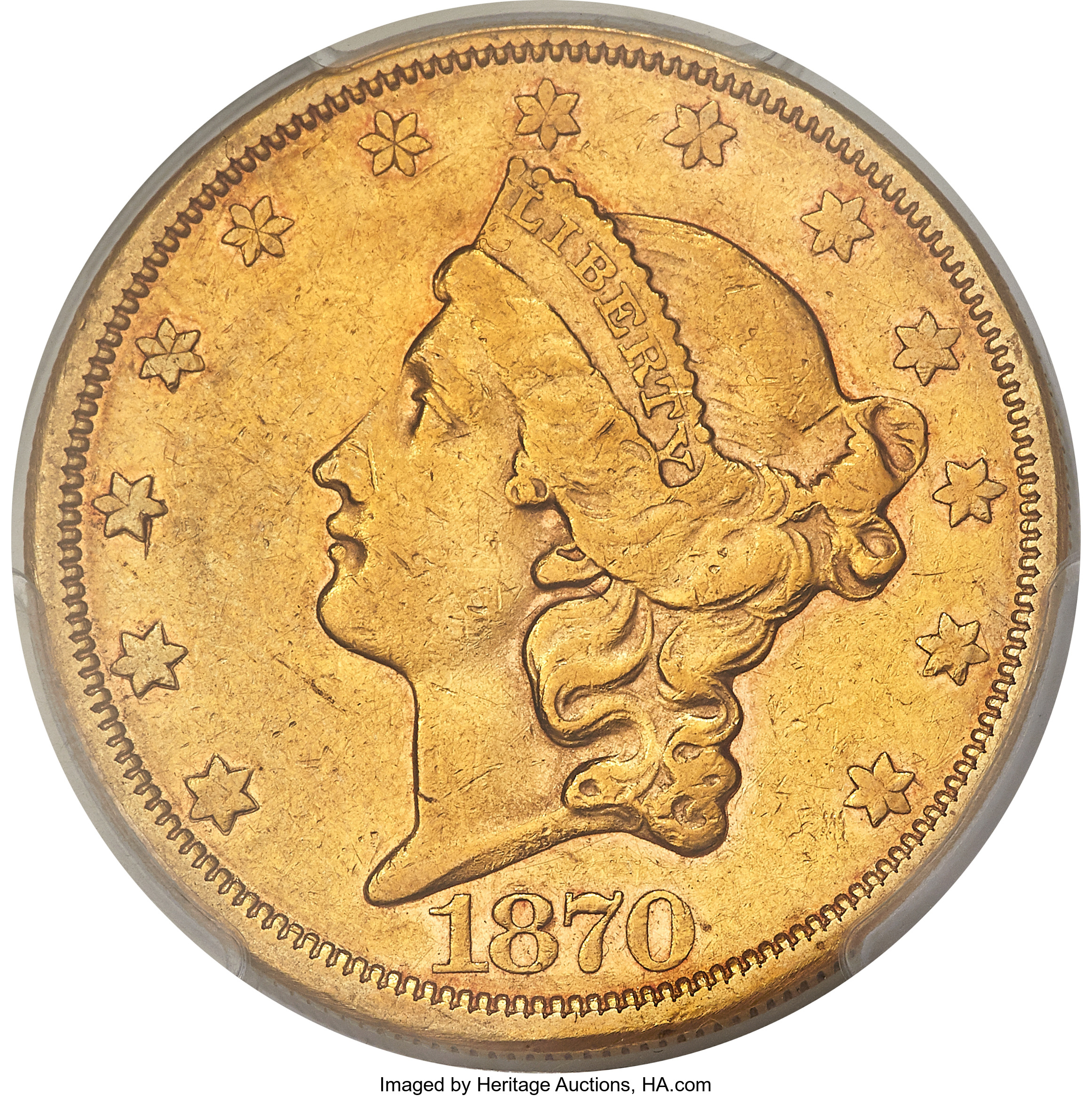 The 1870-CC Double Eagle is one of the most important $20 gold pieces in American numismatics. Struck during the first year of production at the Carson City Mint in very limited numbers (3,789 pieces to be exact), survivors are rare in all grades, and to date, an Uncirculated example has never shown up (and it is unlikely it ever will). Lot 5119 is an EF-45 graded example of this key-date issue, which is among the nicer certified examples to have crossed the auction block in recent times. This, and the other double eagles from the Carson City Mint served an important role in the commerce of the American west, and a large majority of examples are in low grade, banged up, or damaged. Finding an example free of these common problems for any CC $20 is an oddity, but especially so for the first year of issue. 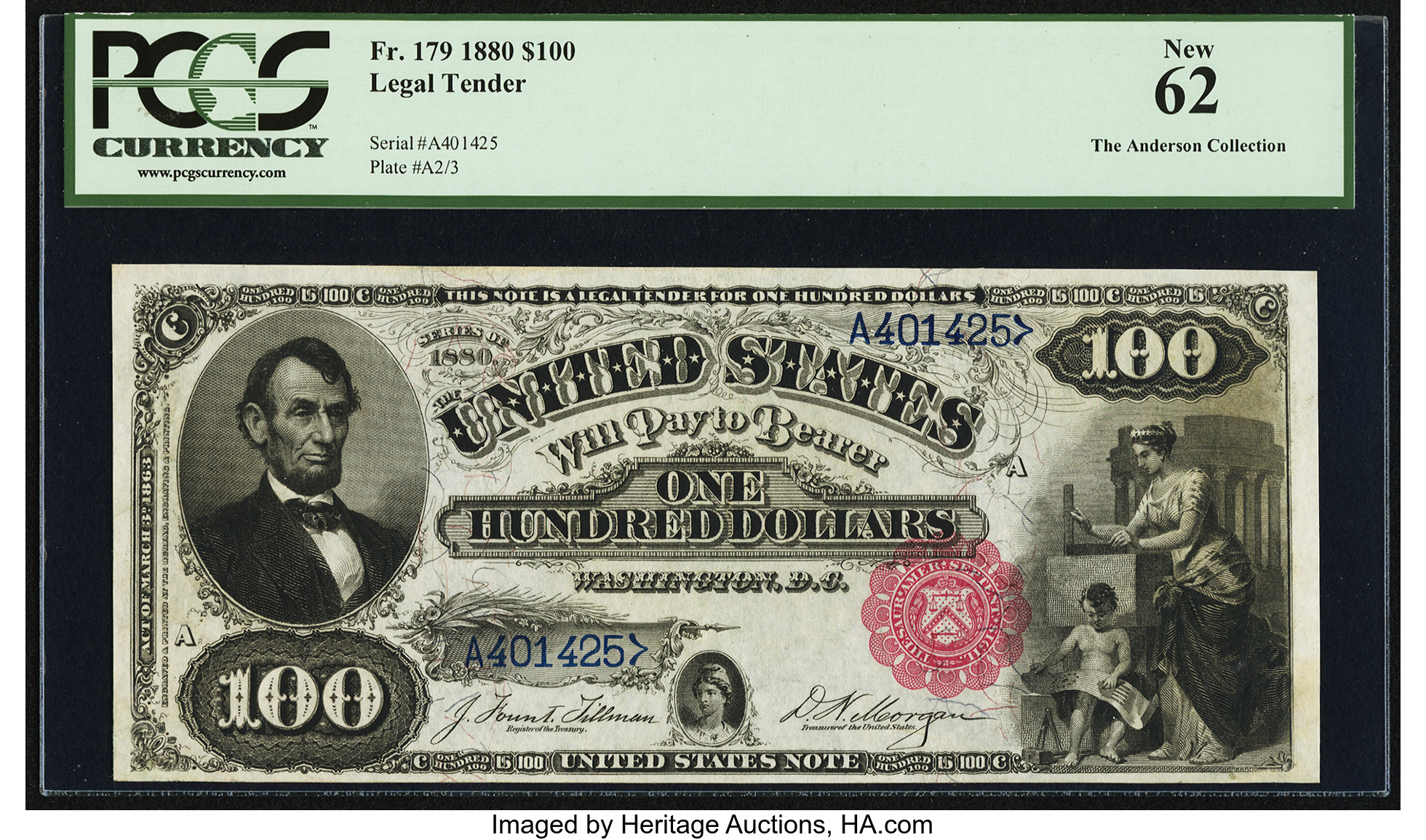 We’re moving now to a completely different field of American numismatics, namely paper money. Lot 22057 is a type that few outside dedicated large size collectors will have ever seen. Friedberg 179 is a series of 1880 Legal Tender $100 note with Tillman-Morgan signatures, graded New 62. Despite the fact that this type was printed for over three decades, few Americans probably encountered it in circulation, as it represented a huge sum of money at the time (when issued this note would be the equivalent of $2,700 today). Most were kept inside of banks and rarely circulated among the general public, but thanks to the fragile nature they were still often mishandled, making Uncirculated examples very difficult to find. The note features the portrait of Abraham Lincoln on the left, and a vignette representing architecture at right. 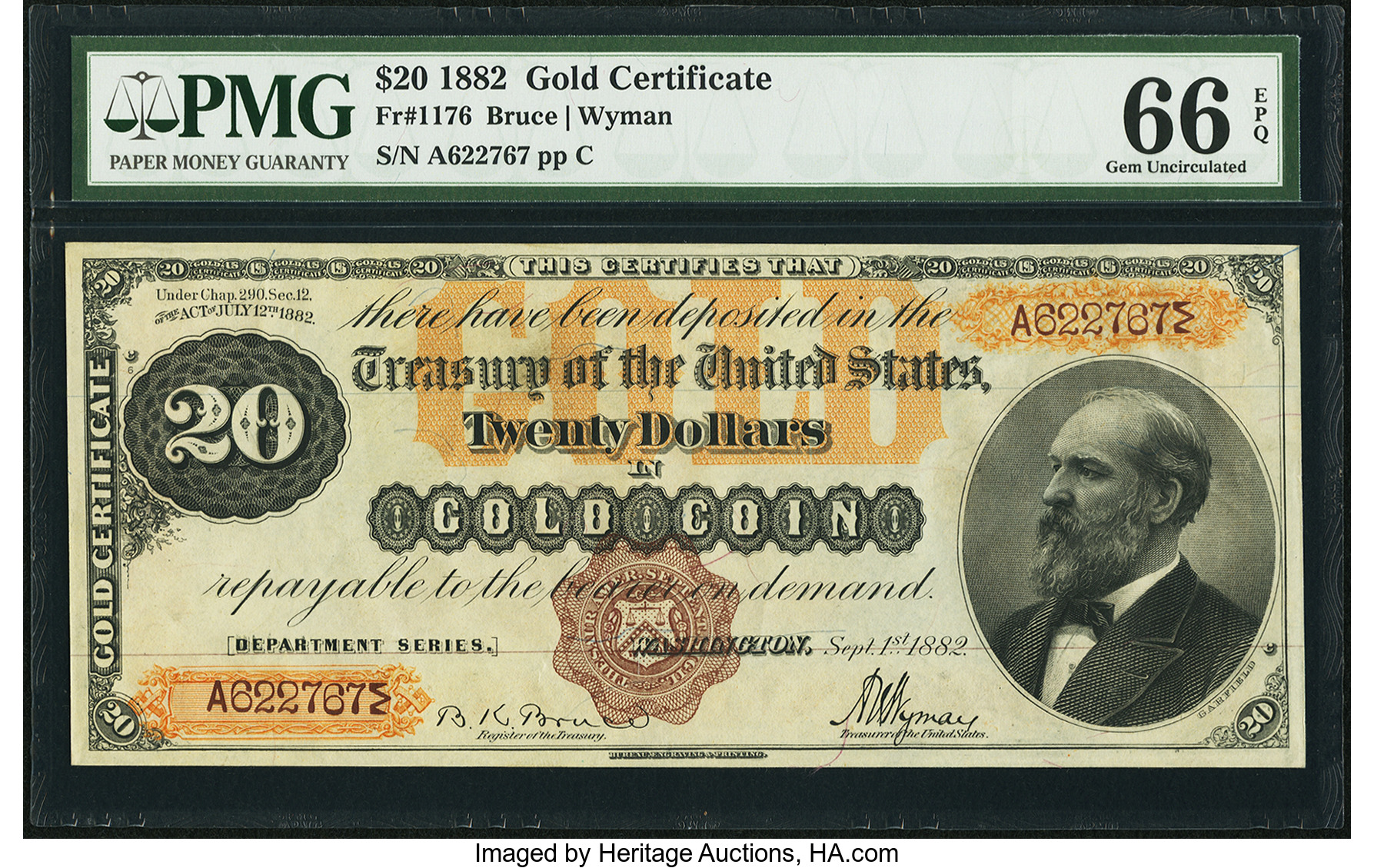 The final lot we will take a look at is also from the paper money auction. Lot 22173 is a Friedberg 1176, a series of 1882 $20 Gold Certificates with Bruce-Wyman signatures, graded Gem Uncirculated 66 EPQ. Issued in the late 1880s, at the time these were exchangeable for a $20 gold piece, and these gold certificates saw quite a bit of circulation. While this type was issued with several different signature varieties, most are very scarce, although type collectors can usually find an example with Lyons-Roberts signatures. Generally speaking, however, high-grade examples are rare for virtually all large size gold certificates, and finding a Gem Uncirculated example such as the one offered by Heritage of a much scarcer variety is very difficult. The note itself has a portrait of President Garfield at right on the face, while the back is orange and features an eagle in flight atop a thunderbolt.

Last chance Roosevelt dime: When to give up on grading