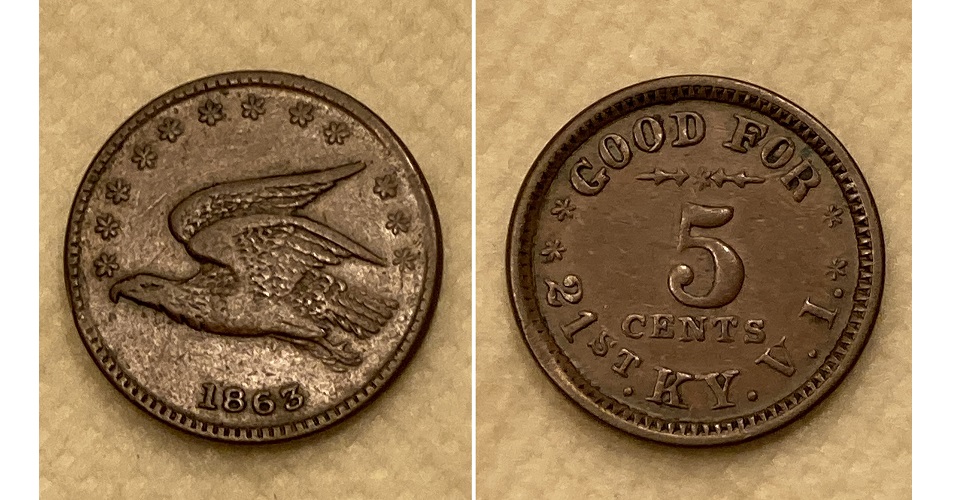 This installment of “From the Colonel’s Desk” comes from the pen of Col. John Riley, Honorable Order of Kentucky Colonels (commissioned 1985), a longtime numismatist who hails from the Bluegrass State.

Miss Manners would no doubt consider it crass to talk about the prices of our accumulated treasures. “Don’t be a clod,” she might say! But, as fellow collectors, price points are a critical element of our hobby: Beyond the interesting historical curiosity, VALUE drives what we can and cannot pursue.

You might ask yourself, is there value in the range of items discussed in this column? In the case of Kentucky exonumia, and most token and medal specialty fields for that matter, premiums are still relatively modest compared to official government-produced rarities. A few hundred dollars can take you far in acquiring significant and personally meaningful local items. And make no mistake, there are excessively rare pieces, often the only ones known of their kind—tokens and medals which, if interested parties exist, will trade in excess of $2,000 or more. While the demand is small, the supply is much smaller still. We will look at some great examples.

It follows that modern collecting themes reflect the commonplace activities of our forebears during the heyday of token use, roughly 1880 through the end of the Great Depression. Families who labored in forestry or coal, or whose recreation was at the healing waters of the many mineral springs that dotted the state, would routinely exchange these advertising “chips” for goods and services.

And, not surprisingly, we still have a fascination for regional steam trains, trolleys, and ferries. Obscure transportation and drayage tokens of Kentucky usually bring the highest prices in the current numismatic market. 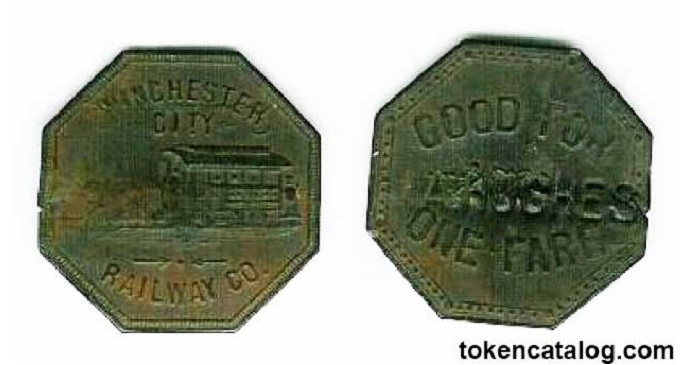 The Winchester City Railway token (illustrated) is a prime example of a rare and popular issue that has seen buying and selling among specialists for sums in excess of $2,000. Produced by the same maker and showing the identical design to the somewhat more common Lexington City Railway tokens of the 1880s, it saw a proportionally smaller mintage and is among the most desirable of all Kentucky numismatic collectibles.

A Versailles “From Depot to Hotel” fare token has been seen in recent years, similarly hammering for nearly $2,500 in an online auction.

I recall being outbid a few years ago on an aluminum Cerulean Springs Resort Hotel token from the early 1900s that sold for several hundred dollars—again, minimal intrinsic worth but a treasured relic of the simpler Kentucky lifestyle from over a century ago. The mineral waters were a popular respite from the summer heat and thought to be a way to escape common fever epidemics of the period. 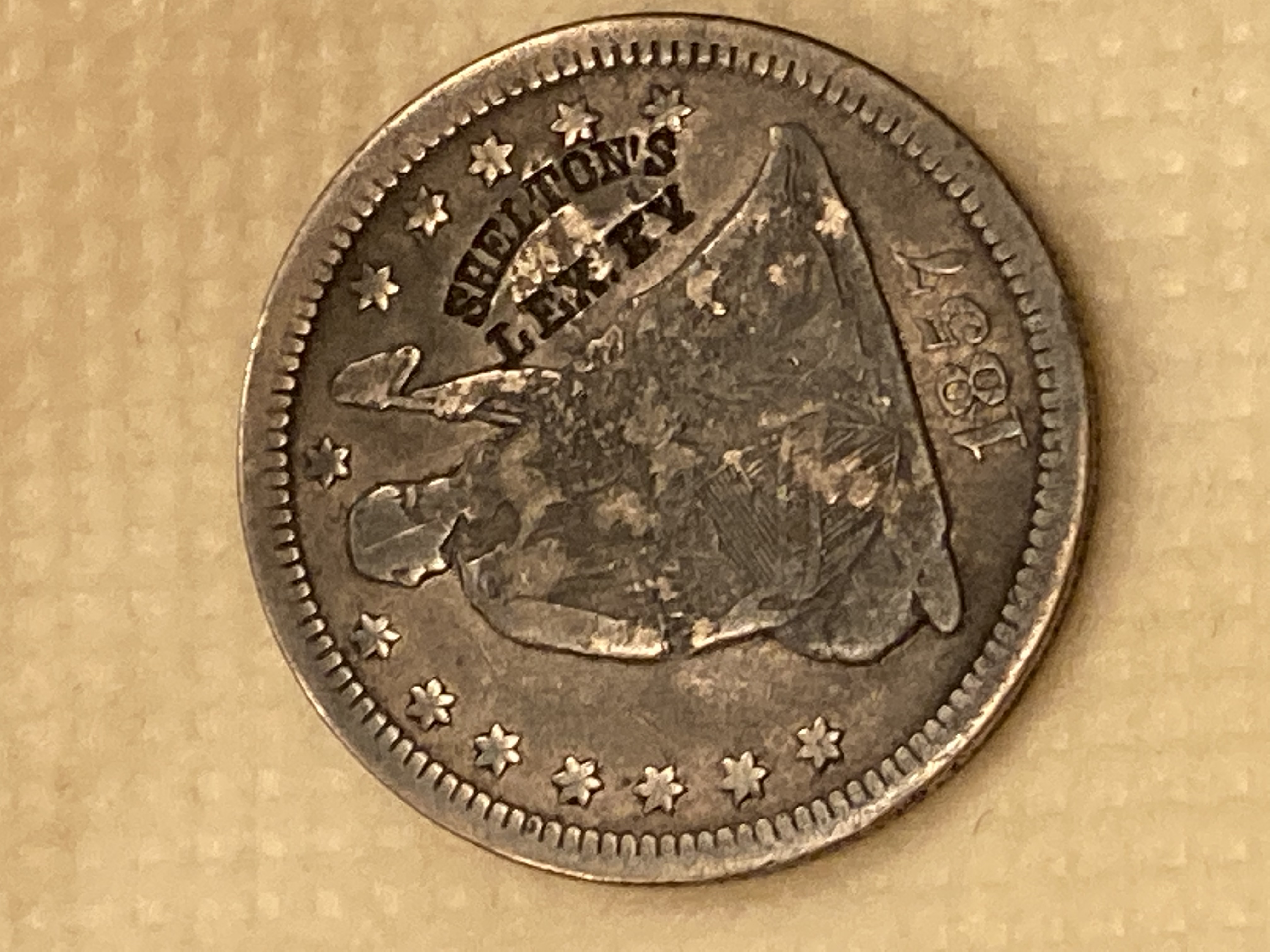 A counterstamped Liberty Seated quarter dollar marking Shelton’s Curd House, a hotel and stables in the “Town Branch” section of downtown Lexington, Kentucky. This was one of the earliest sections of the city, and today is seeing intense revitalization. (Courtesy of Col. John Riley.)

Every conceivable issuer of tokens has a story, and the now-defunct towns have a particularly wistful appeal to those with an affinity for their community or county. While the neighborhood of Camp Zachary Taylor in Jefferson County still thrives, for example, it saw only a short life as a U.S. Army training and processing station. Many of us had grandfathers and other relatives who initially mustered at Camp Taylor for World War I service. The tokens related to the camp are very scarce and take on a more sentimental meaning. And before the post exchanges, there were military sutlers (whose few Kentucky-identified issues are precious). 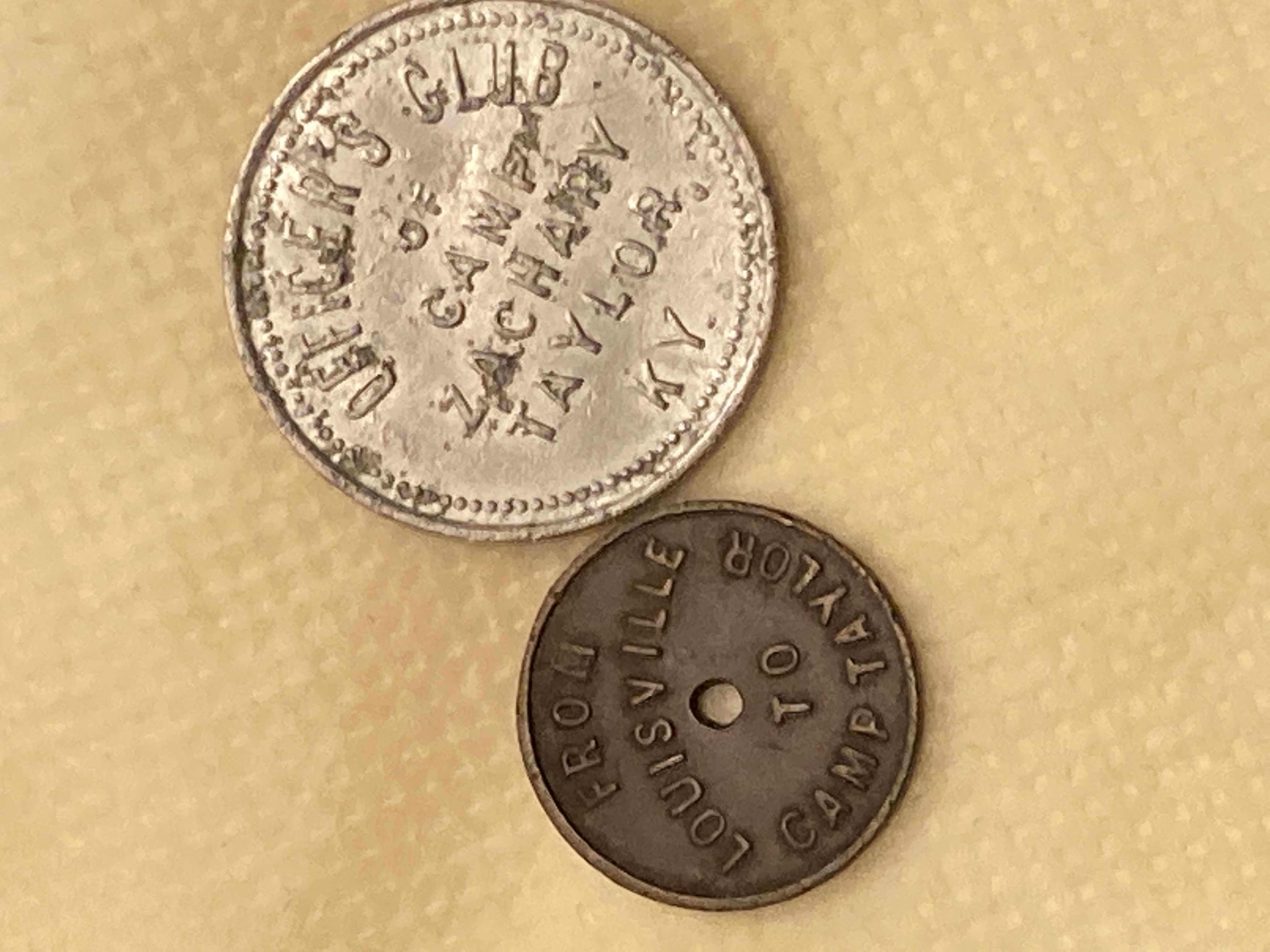 An 1863-dated Civil War token for the 21st Kentucky Volunteer Infantry (U.S.). The outfit mustered out of Greensburg, in central Kentucky, and participated in actions around Nashville and Chattanooga, Tennessee. (Courtesy of Col. John Riley.)

There are many, many other examples of valuable Kentucky numismatics. This casual conversation hardly scratches the surface. Coal and lumber exonumia, particularly the very early Kentucky issues, are a world unto themselves and it is not unusual to read of rare pieces exchanging for $1,000 or more—there is a fierce and loyal band of aficionados chasing them, after all!

The history and stories behind our coins, tokens, and paper are usually what bring us into the hobby. Being cognizant of value, rarity, and profit will often hold us in for life. I hope to hear from readers about the “good stuff’ you’re aware of from the State of Kentucky!

From the Colonel’s Desk: Silver medals for the Kentucky Derby