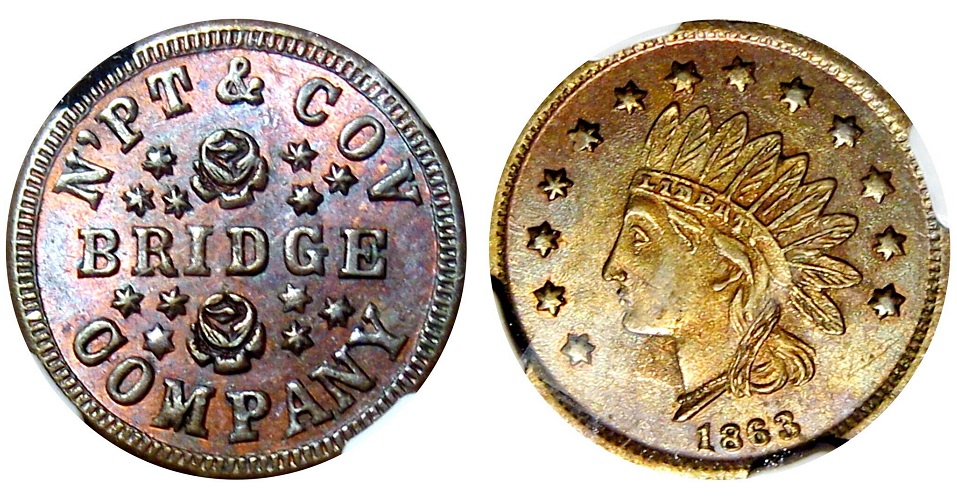 Some months ago, we took a look at merchant tokens issued by Kentucky businesses during the Civil War. (See “Kentucky Brass—Private Money in the Civil War,” July 29, 2021.) These tokens, usually made of bronze and the size of a cent, were manufactured privately, not by the government. Although not legal tender, they circulated as small change during the war, when everyone was hoarding any hard cash they could get their hands on—gold and silver for sure, but also coins as lowly as the “penny.”

I recently spoke with Steve Hayden of Charleston, South Carolina, one of the preeminent dealers in Civil War tokens, to see how the market is doing for these little pieces of history. “As with all collectible coins,” he says, “Civil War token prices, in general, have been very strong for the last couple of years.”

Here’s an illustrated roundup of some nice tokens Steve has auctioned recently on eBay.

Arbeiter Halle, Pike Street, Covington, Kentucky. Fuld KY150A-1a. Rarity-6. Graded Very Fine. In his Guide Book of Civil War Tokens, Q. David Bowers noted, “‘Arbeiter Halle’ is German for ‘Workers’ Hall,’ no doubt a social gathering place where beer flowed profusely.” Bidding for this token was no less spirited than for the similar token pictured above, even though this one shows its age more. 19 bids were cast before time ran out and the token sold for $170.50 on January 30, 2022. (Image courtesy of Steve Hayden.)

Newport & Covington Bridge Company, Kentucky. Fuld KY640B-2a. Rarity-8. Graded MS-63 RB (NGC). This token was issued by a toll-bridge company with its office at the east end of the bridge that connected the cities of Covington and Newport. It sold for $565.55 on March 14, 2022. (Image courtesy of Steve Hayden.)

It’s a Fugio cent, not a copper; and it’s about time