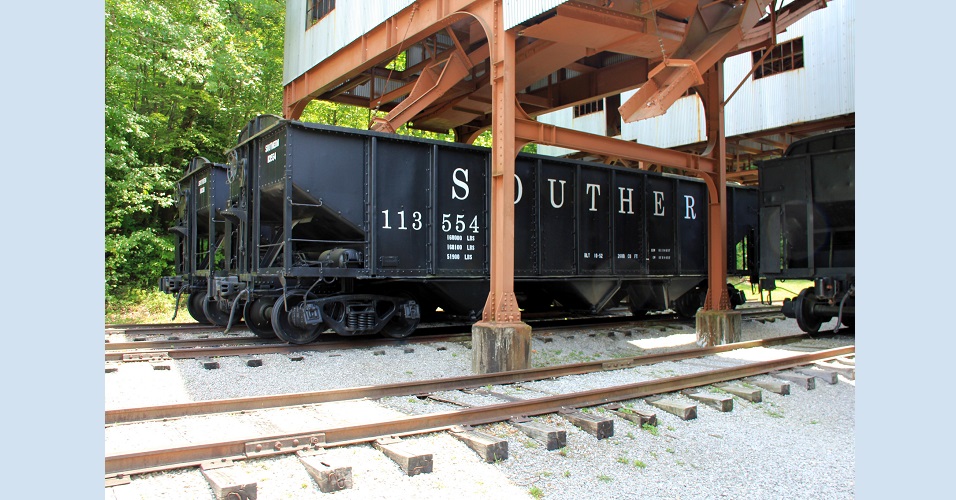 Coal cars at the Blue Heron Mine along Big South Fork Scenic Railway in the mountains of southern Kentucky, July 2012. (Photo courtesy of Anthony via Flickr).

A few weeks ago a colleague in the publishing world clued me in to a bit of good news.

Ray Appen is publisher emeritus of Appen Media Group, which is based in Georgia but has a much wider sphere of influence—in this significant instance, reaching a helping hand into southern Kentucky.

“There are over 200 children who live in an extremely poor part of Kentucky, a coal town,” Ray says. His friends Ralph and Sarah Rucker and Larry and Joyce Smith have, for years, made sure those kids know that people care about them.

Ray has written about them before. In a recent opinion piece in the Alpharetta-Roswell Herald, he said, “Every year, the Ruckers and Smiths and their friends and supporters—as well as a ministry—start buying presents around mid-summer, well over 200 bundles of Christmas presents, gifts, and food. This is a really substantial effort. The bundles of presents are driven up in a semi-truck full to the brim.”

The group budgets $200 for each bundle of Christmas gifts—”even when it means that a lot of those dollars come out of their own pockets,” as Ray said, noting that the Ruckers are well into their 80s and Ralph still works five to seven days a week in landscaping and concrete.

That fortitude is a testament to life in McCreary County, where the Ruckers and Smiths work their Christmas magic.

There are antique tokens that still exist from the coal and lumber companies of McCreary County. They remind us how hardworking the people who call this area “home” have been for generations.

I spoke with a coin-collector friend, John Riley—a fellow Kentucky Colonel and an enthusiast of all things numismatic that relate to the Bluegrass State. I asked him if he knew of any old “company store” tokens from McCreary County. John observed that they occasionally come up for bid on eBay and elsewhere. “Local scrip from tiny towns is the only exonumia that exists for the region,” he said. Stearns Coal & Lumber Co. offers a good example. 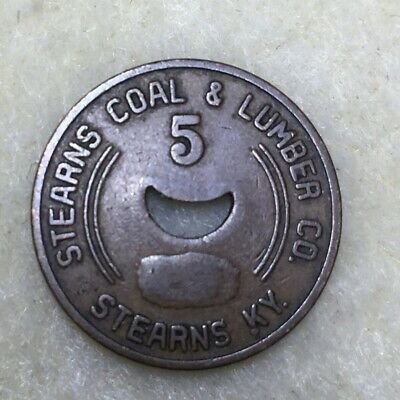 The Kentucky Department of Tourism describes Stearns: “Sandwiched between a national forest and a national recreation area, Stearns, Kentucky boasts a lifetime’s worth of exploration for the adventurous soul. You’ll find backcountry trails that follow pristine streams, sandstone rock arches rising out of the forest, and stunning views of the roaring Big South Fork River.” The region gave birth to major coal and lumber production. This token is from the Stearns Coal & Lumber Company. (Image courtesy of eBay).

The company was formed in 1902, as the coal and lumber industries were really gearing up in Tennessee and Kentucky. Justus Stearns was an industrialist from Michigan who acquired 30,000 acres of land down south. The late historian Tom Des Jean wrote for the Tennessee Encyclopedia:

The Stearns Company employed area residents and established a bond of mutual respect that made the company relatively immune from the labor strife that characterized much of the mining industry during the 1920s and 1930s. The Stearns Coal and Lumber Company was the oldest continuous mining operation in Kentucky when the company sold out in 1975. 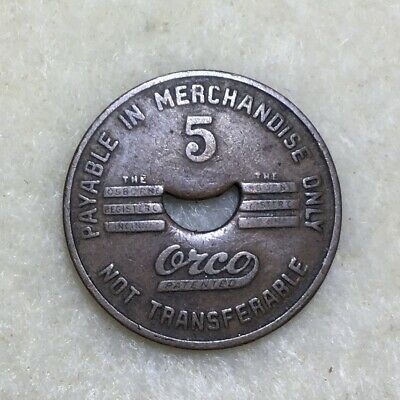 “Sitting on the edge of the Daniel Boone National Forest and the Big South Fork National Recreation Area—with well over 100,000 acres of land and water—Stearns is an outdoor playground for anyone who likes to spend time in nature,” per the state’s Department of Tourism. For generations of miners and lumber workers, McCreary County has been a place of back-breaking work and financial struggle. (Image courtesy of eBay).

Today collectors and local historians can find small bronze tokens “payable in merchandise” in various denominations. These tokens were a medium of credit, issued to Stearns employees at their own request, in payment for labor performed (or, more often, as advance pay for labor to be performed). They were redeemable but not legally transferable, and the employee was entitled to turn them in for cash from the company (typically at a discount of about 10 percent). 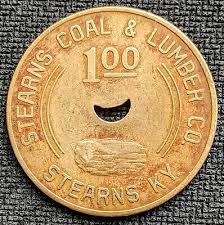 In spite of the “bond of mutual respect” that historian Des Jean described, it’s hard to look at these tokens today without thinking of Merle Travis’s 1946 song “Sixteen Tons” and its Kentucky coal-miner’s laments: “You load sixteen tons and what do you get? Another day older and deeper in debt” and “Saint Peter, don’t you call me, ‘cause I can’t go—I owe my soul to the company store.”

On a happier note, let’s circle back to the Christmas cheer that the Ruckers and Smiths and their friends bring to poor children in McCreary County:

If you’d like to write a check—for, say, the amount you’d spend on a coin or token for your collection—you can send it to

or visit the ministry’s website to learn how else you can help. 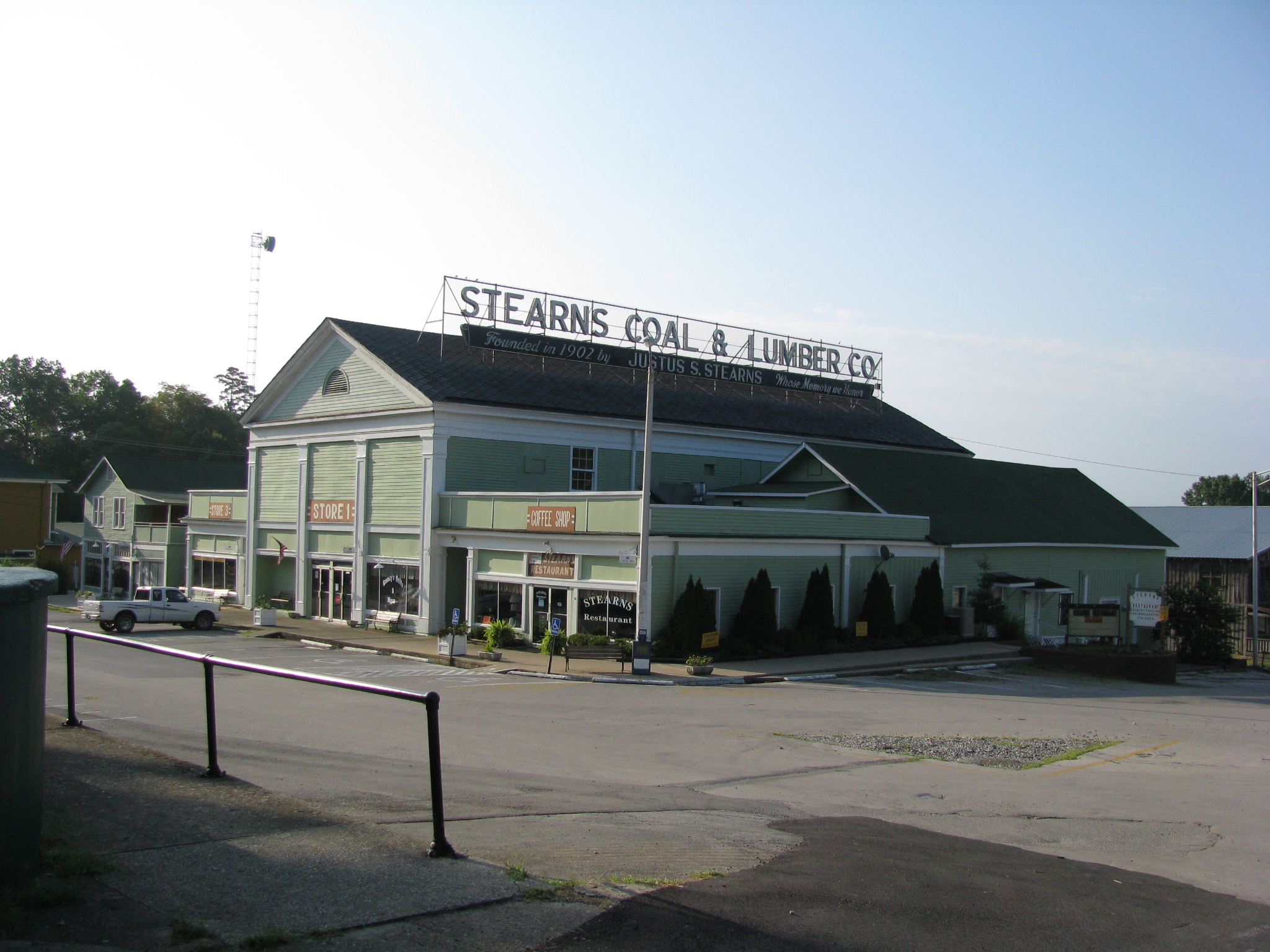 The Stearns corporate headquarters, built in 1907, is now the McCreary County Museum, home to artifacts, documents, and photographs from the town’s mining and logging days. (Photograph courtesy of Kybluegrass, Wikimedia Commons).

Maybe the numismatic hobby community can help ease a bit of that struggle. As Ray Appen put it, “Smile! We’ll all get through this trying time together. And helping others is the ticket.”

My friend Col. John Riley is “six generations deep in Kentucky,” and grew up in Hopkinsville, a town I highlighted in a recent column (“Two lucky farmboys and a jug of Civil War gold coins”). We’ll hear more from him in future articles.

If you’d like to learn more about coal and lumber scrip and tokens from eastern Kentucky, here are a couple articles about Steve Cawood—”the great Steve Cawood,” as John Riley calls him—a well-known collector and historian:

From the Colonel’s Desk: Traveling salesmen and the hell of war

From the Colonel’s Desk: The colonel is on the hunt. . . at the ANA

From the Colonel’s Desk: How much for a refreshing mug of beer in Louisville?