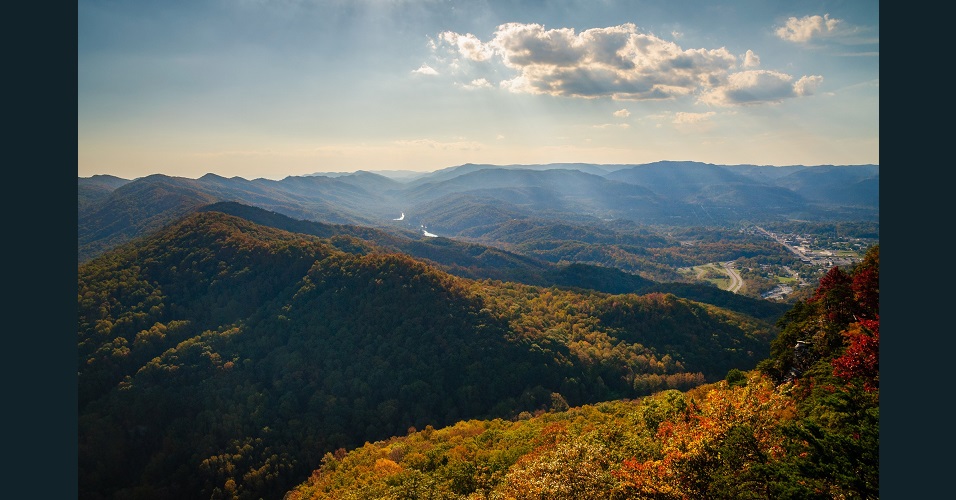 Cumberland Gap National Historical Park, situated where Kentucky, Tennessee, and Virginia meet, was established in 1940. The “gap” is a natural break in the Appalachian Mountains, long used as a gateway through the wilderness. (Photograph courtesy of Zack Frank, Shutterstock).

Last week we looked at the United States Mint’s extremely popular State quarters program, which ran from 1999 to 2008.

That coin program was so successful that Congress followed it up, in 2009, with similar coins for the District of Columbia and five U.S. territories. Then Congress authorized a new program, called “America the Beautiful,” to make a fresh batch of circulating commemorative quarters. This series would honor sites of “natural or historic significance,” one from each of the 50 states, plus the Commonwealth of Puerto Rico, Guam, American Samoa, the U.S. Virgin Islands, the Commonwealth of the Northern Mariana Islands, and Washington, D.C.

The new coins were issued from 2010 to 2021 in the order their featured locations were designated as national parks or national sites. So, the first was for Arkansas (Hot Springs National Park), followed by Yellowstone in Wyoming, Yosemite in California, the Grand Canyon for Arizona, and Oregon’s Mount Hood National Forest. Those five coins were minted in 2010. 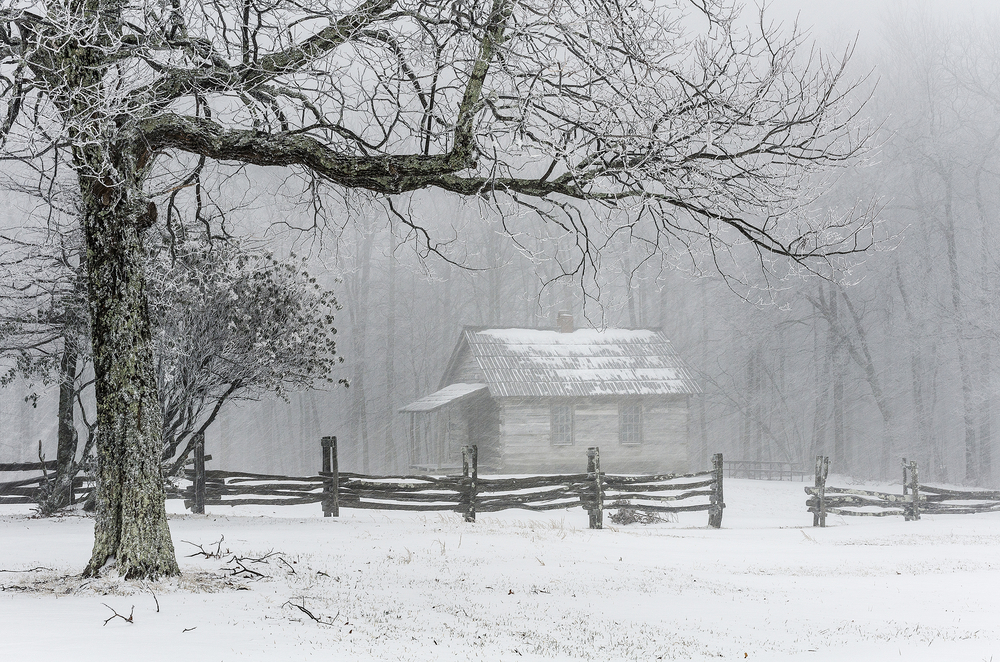 For hundreds of years, the Shawnee and Cherokee Native Americans knew a game trail that the Shawnee called Athiamiowee. White pioneers referred to it as the Warriors’ Path. From the late 1700s to the early 1820s, some 300,000 settlers and other explorers traveled the route through the wilderness into Kentucky. (Photograph, of a one-room schoolhouse in the national park, courtesy of Anthony Heflin, Shutterstock).

Kentucky’s coin was number 32 in the series. It arrived in 2016, seven years into the “National Parks” program (as it was popularly known). In its promotional literature, the Mint described the subject of the coin, Cumberland Gap National Historical Park:

The buffalo, the Native American, the lone hunter, the pioneer . . . they all traveled through Cumberland Gap, the first gateway to the West, into the wilderness of Kentucky. Modern-day explorers and travelers stand in awe at this great break in the Appalachian Mountain chain, carved by wind and water. Visitors to Cumberland Gap National Historical Park enjoy many miles of trails and scenic features, as the park stretches for 26 miles along Cumberland Mountain, ranging from one to four miles in width and containing 24,000 acres.

The Mint developed potential coin designs while consulting with representatives of Cumberland Gap National Historical Park. On September 23, 2014, five candidate designs were presented to the Citizens Coinage Advisory Committee for its review. Carol Borneman, the Park’s chief of interpretation, attended the meeting by phone.

Cumberland Gap was a strategically important path to the West during the American Civil War. Forces of the Union and the Confederacy fought to control the area. (Photograph courtesy of Cassi Lee Photos, Shutterstock).

The Committee narrowed the choices down to three. After a robust conversation and analysis of the designs, the CCAC’s recommendation to Treasury Secretary Jack Lew was Design 02, with a frontiersman gazing across the mountains and the legend “First Doorway to the West.” In the committee’s voting, this motif earned 26 points of a potential 33 (the other two designs earned 4 points each).

During the discussion, CCAC member Heidi Wastweet, an artist and sculptor from California, asked Chief Borneman for clarification on the wording on the coin. “In the descriptions [read during the meeting], I’m hearing ‘Gateway’ and here I’m seeing ‘Doorway,’” she observed. “Can you tell me anything about that?” Ms. Borneman explained, “It’s better as ‘First Doorway to the West,’ because St. Louis claimed the title of ‘Gateway to the West.’”

CCAC chairman Gary B. Marks noted the artistry of the frontiersman’s face and upper body, and the use of negative space at the top. He addressed an issue that sometimes arises with coin designs—an artist might develop an impressive sketch at six inches diameter, only to find it loses strength or clarity when reduced to the much smaller size of an actual quarter dollar. “I like this design,” Marks said, “because when you look at it as a one-inch coin, you can still understand this is a pioneer-looking man with a rifle. It immediately tells a story to the person who views it. They don’t have to guess about what this is.”

Committee member Erik Jansen, known for addressing technical manufacturing questions about candidate designs, pondered the inscription: “I’m wondering if that lettering could go incuse?” The Mint’s branch manager for digital process and development, Steve Antonucci, replied that incusing the letters would run into production problems—”starvations issues,” as he put it, referring to the flow of metal during minting.

Jansen also focused on the historical accuracy of the design. “My question to the historians involved here: Is that the right hat, the right cape, the right gun?” Ms. Borneman reassured the committee, “Yes, that hat is what the pioneers would have been wearing, a tricornered hat. That hunting frock is pretty close. We can provide some more detail. When we first looked at it, it was our understanding that these were rough designs, so we commented on the overall design versus the specific items. It might need a tad bit of cleaning up.”

Dr. Herman Viola, the CCAC’s resident American historian, concurred. “With Cumberland Gap, I’m very happy with [Design 02],” he said. “I did considerable research. His outfit seems pretty good. The Kentucky rifle he holds is pretty good. It looks like 1780s vintage. That’s the way they dressed, the kind of farmer’s hat, and he has a long hunter’s coat on, and often they were made with wool, not always with buckskin, so you don’t want to make him look like Daniel Boone or Davy Crockett with a coonskin hat.” 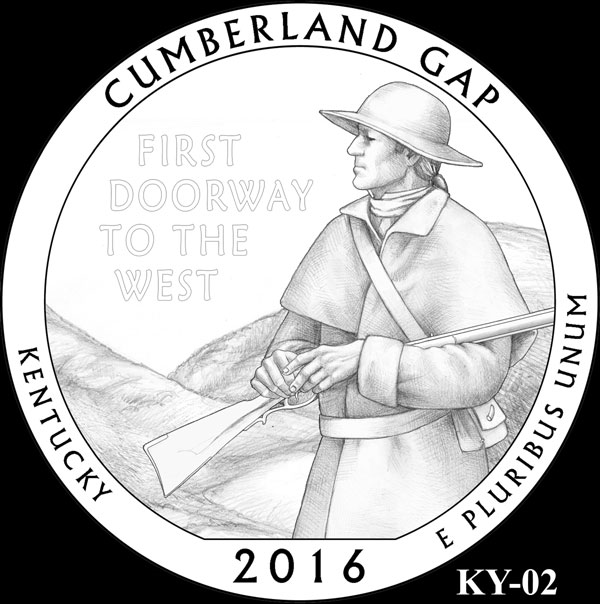 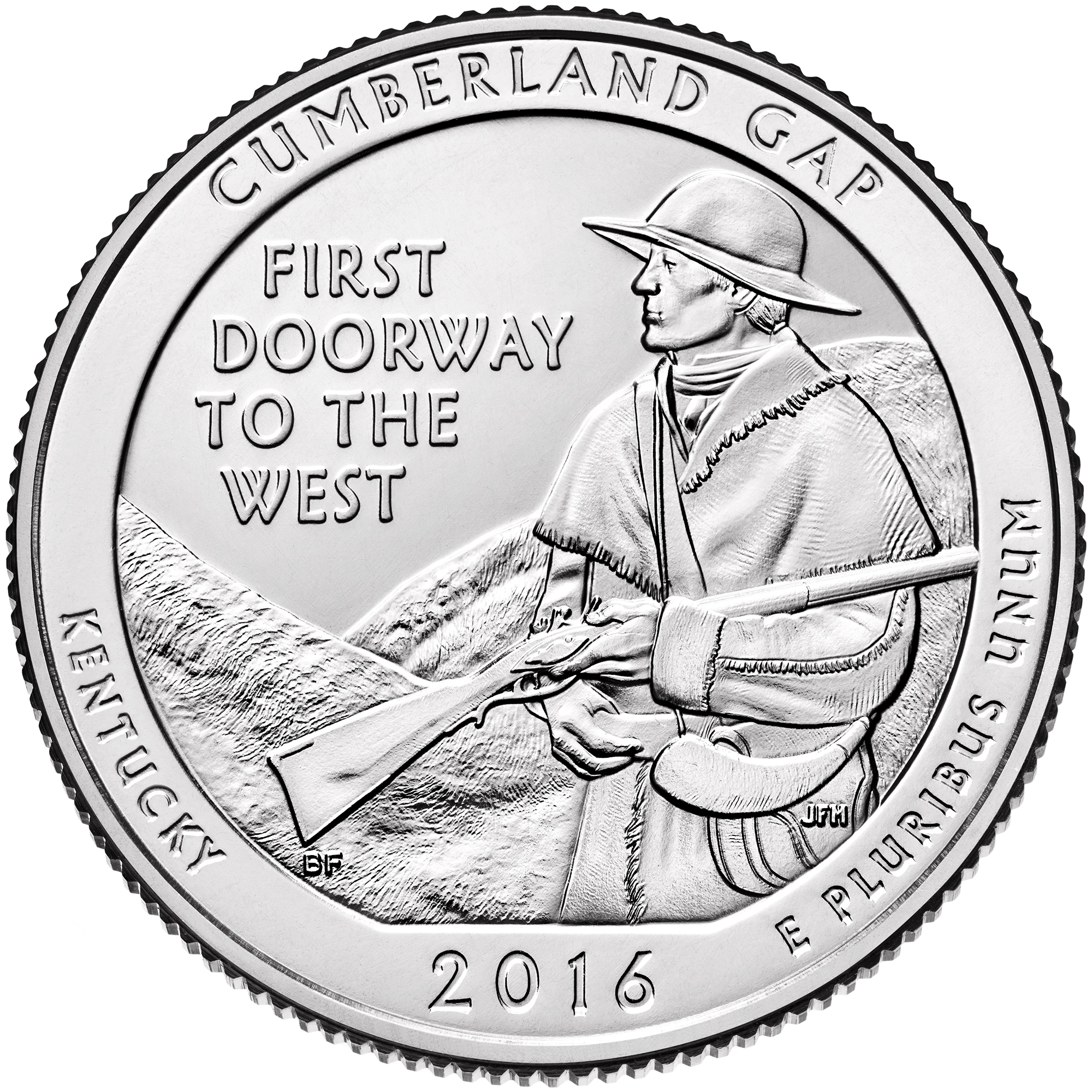 Adding to the unique artistry of designer Barbara Fox, Kentucky’s Cumberland Gap quarter was one of 13 coins in the 56-coin program to be sculpted by the future chief engraver of the United States Mint, Joseph Menna.

Ultimately Treasury Secretary Lew agreed with the CCAC’s recommendation of Design 02 (which was also the preference of the Cumberland Gap National Historical Park’s managers). The design would go through some light modifications, as Ms. Borneman suggested. The proposal sketch and the finished coin are both illustrated here, for comparison.

The design competitions for U.S. Mint coins are “blind”—members of the CCAC don’t know which artist is the creator of any given candidate design. It turns out the creator of the Cumberland Gap artwork was Barbara Fox, a fine-artist and illustrator in rural upstate New York. Fox is a member of the Mint’s Artistic Infusion Program. By the time the CCAC reviewed the Cumberland Gap designs in 2014, she’d already created two coins in the America the Beautiful program, for Glacier National Park in 2011 and Acadia National Park in 2012. These would ultimately be joined by her artwork for Saratoga National Historical Park (2015), Cumberland Gap (2016), and Ellis Island (2017). Her design was sculpted by Joseph Menna—at that time, a medallic artist on the Mint’s staff in Philadelphia, and today the bureau’s distinguished chief engraver.

Next week we’ll take a look at “What Might Have Been”—the other designs considered for the Cumberland Gap quarter, and what the Citizens Coinage Advisory Committee had to say about them.