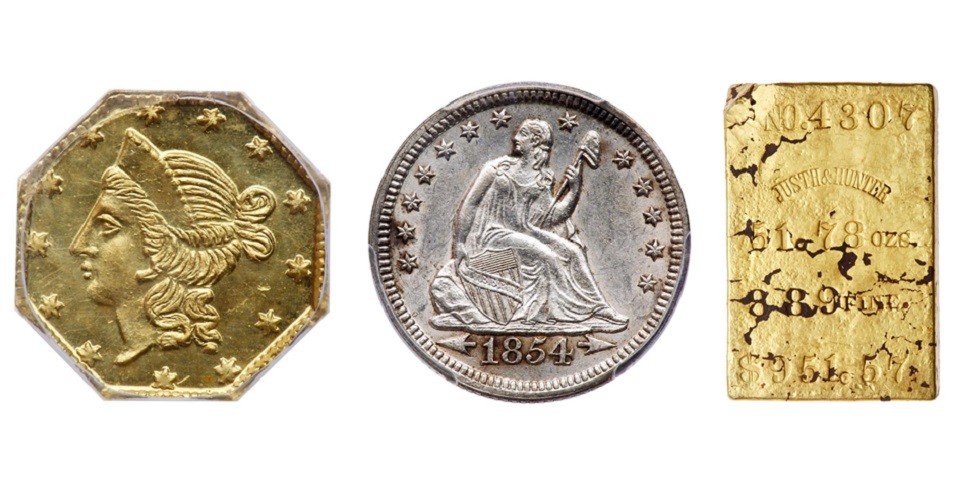 (Los Angeles, California) June 20, 2022 — California Gold Rush-era treasures recovered from the fabled “Ship of Gold,” the S.S. Central America that sank in 1857, will be offered for the first time in the Pre-Long Beach auction by Goldberg Coins & Collectibles on June 27, 2022.

The auction includes 15 of the finest condition California Fractional Gold coins offered to date from the legendary sunken treasure, a 51.78-ounce Justh & Hunter assayer’s gold ingot and one of the finest known surviving 1854 New Orleans Mint Seated Liberty quarter dollars that was retrieved from the purser’s safe on the ship.

“The S.S. Central America is a time capsule of the California Gold Rush. Each of the treasure coins in the auction is housed in a special PCGS holder containing gold dust from miners’ pokes that were also recovered from about 7,200 feet below the Atlantic Ocean’s surface,” explained Larry Goldberg, co-owner of Goldberg Coins & Collectibles in Los Angeles.

“The California Fractionals being offered for the first are the finest quality coins released to date from the 103 found during the 2014 recovery mission. There are some beautiful gems and Prooflikes,” said Dwight Manley, managing partner of the California Gold Marketing Group which consigned the sunken treasure items to the auction.

Highlights of the auction session include:

The S.S. Central America was a 280-foot long, three-masted side-wheel steamship carrying what Life magazine later called “The Greatest Treasure Ever Found,” tons of California Gold Rush-era gold coins and assayers’ ingots. She sank in a hurricane about 150 miles off the North Carolina coast in September 1857.

The Goldberg’s Pre-Long Beach auction will be conducted June 26-29 with the S.S. Central America coins offered as lots number 747 through 764 in the June 27 session. The entire auction catalog with lot descriptions and color photographs can be found online. Printed copies of the catalog are available for $15 each postpaid.

For additional information, contact Goldberg Coins & Collectibles at 310-551-2646, by email at , or visit online.