The Monnaie de Paris concludes its three-year long “Values of the Republic” series of coins, which highlight pillars of the French nation. The new issues feature the comic book sagas of two of the country’s most famous characters, Asterix and his faithful companion, Obelix.

The comic book series was introduced to French and Belgian audiences in October of 1959. It follows the exploits of a village of indomitable Gauls who resist Roman occupation with the superhuman strength granted them by a magic potion, brewed by their druid priest, Abraracourcix. The series has been translated into more than 100 languages, sold more than 350 million copies, and has been brought to the big screen in full length films. Many of the stories have the characters travel to foreign countries, while others are set in or around their village. The character names Asterix and Obelix each include an “ix” suffix, which is based on the real names of Gaulish chieftains such as Vercingetorix, Orgetorix, and Dumnorix.

Originally created by René Goscinny and illustrated by Albert Uderzo—who took over the writing after the death of Goscinny in 1977—the team of Uderzo and Goscinny have become known worldwide for creating meaningful and perceptive messages through the exploits of their amusing cartoon characters.

Born on April 25, 1927 in Fismes, Alberto, Uderzo started to draw quite early. From the age of 14, he drew illustrations for many youth magazines before progressing to daily newspapers and becoming a cartoonist reporter. In 1950, he worked with the scriptwriter Jean Michel Charlier, with whom he created Tanguy et Laverdure. In 1951, Uderzo met René Goscinny, with whom he created several series and comics.

René Goscinny was born on August 14, 1926, in Paris. Amazingly, he studied for a career in accountancy and became an assistant accountant. When he turned 19, however, he drastically changed direction and became an artist’s assistant in an advertising agency. After he met Uderzo, he gravitated towards scriptwriting and authored Petit Nicolas, published in 1959. That same year Goscinny and Uderzo created Asterix the Gaul for the launch of Pilote magazine. The series became a huge success; since its introduction, editions featuring these characters have comprised 35 titles and have been distributed in over 355 million copies throughout world.

Liberté, Egalité, Fraternité.  The symbols of France and of French people, they are the values on which the French Republic was founded. Astérix and Obélix embody simplicity, humor, and pride for the French Nation and its people.

10€ Liberté: Astérix and Obélix are ardent supporters of liberty. Our Gaul heroes use their resourcefulness and energy to fight any form of oppression. 4 designs in all will be issued, taken from the editions MANIFESTATION, GRILLE OBELIX, ASTERIX CHAINES, and A CHEVAL.

10€ Egalité: Equality is a value that is very important in the series, whether in the village or between men and women. 4 designs in all will be issued, taken from the editions CLEOPATRE et CESAR, BAFFES, GROUPE, and DISTRIBUTION POTION.

10€ Fraternité: As their adventures progress, the Gauls meet the various peoples of Europe. The Swiss, the Normans, the Iberians—those meetings have been highlighted in numerous episodes as an expression of fraternity. 4 designs will be issued, taken from the editions ROMAINS, SUISSES, DANOIS and NORMANDS. 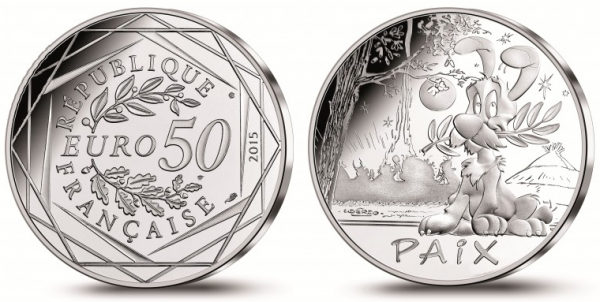 50€ PAIX: Fragile and often difficult to achieve, peace is always its own reward and is the attribute prized over all others. As 2015 is the year the continent of Europe celebrates 70 years of peace in Europe after the end of war in 1945, this coin’s focus is particularly important to many French. The olive branch is a representative symbol of this value. The stories always feature our Gaul heroes engaging in a final banquet, which takes place at the end of the adventure and gathers all the characters together at one table. On the obverse side of the coin, Idefix is seen holding an olive branch in his mouth. In the background we can see that a banquet is taking place, celebrating peace in the village. This drawing is taken from ASTERIX AND THE BANQUET.

Each coin includes a single and uniform reverse design, the words “REPUBLIQUE FRANCAISE” encircling branches of laurel and oak and the denomination. A series of geometric shapes form the border.

This new collection was launched on September 28 and is now available for the coins’ face value at Monnaie de Paris, as well as in many French post offices and commercial banks. This is the last of a series that commenced in 2013; an earlier set also dated “2015” was issued in February. The three-year set is housed in a specially designed album with individual spaces for the coins, a certificate describing the design, and an envelope to house the coins. A cardboard folder display is also included which display colorful designs from many of the Asterix cartoons.

For more information on this and other coins offered by the Monnaie de Paris, please visit their Web site.