The Royal Australian Mint recently released a new $1 coin to celebrate the life and work of Professor Fred Hollows. He was an ophthalmologist known for restoring eyesight to thousands of people in Australia and other countries. He pioneered modern cataract surgery, using an implanted intraocular lens and teaching local technicians how to do the same.  His work lives on through the Fed Hollows Foundation. 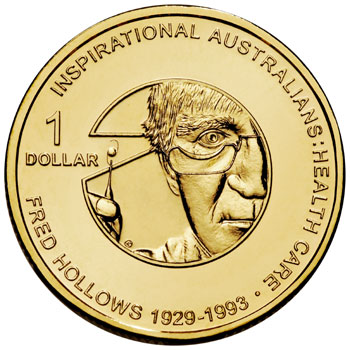 The coin depicts Fred Hollows holding an intraocular lens. It was designed by Vladmir Gottwald, inspired by a photograph taken by George Fetting. The Royal Australian Mint officially released the coin on July 7, 2010 at the opening of a Fred Hollows photographic exhibition at Parliament House.

The Fred Hollows $1 Coin is the third release in the Royal Australian Mint’s Inspirational Australians Series. This series is intended to recognize and celebrate Australians who have made extraordinary contributions to society. The prior releases included a Mary MacKillop $1 Coin and Steve Irwin $1 Coin.

Gabi Hollows, Founding Director of the Fed Hollows Foundation said, “Fred’s family, friends and The Foundation are honoured that the Mint chose to feature him in its Inspirational Australians series. It was a pleasure to work with the Mint through the design process and I think it’s a great thing that so many Australians are still inspired by Fred’s work.”

The 2010 Fred Hollows $1 Coin is available for purchase at the Royal Australian Mint and can be purchased online at http://www.ramint.gov.au