President Franklin Pierce was our 14th President, the only one to have called New Hampshire home.  During his presidency, he signed the Kansas-Nebraska Act, which repealed the Missouri Compromise and once again opened the question of slavery being propagated into the western states and territories.  Franklin Pierce was subsequently abandoned by his political party and not nominated to run in the 1856 presidential election. 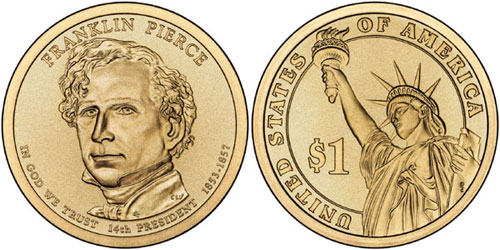 The coin bearing President Pierce’s image is the 14th in the series of Presidential Dollar coins, and the second to be issued this year. Its obverse depicts President Pierce, his years in office (1853-1857) and the motto “In God We Trust”.  The reverse shows the Statue of Liberty in the same design as been depicted on all Presidential dollars.  The edge has the motto “E PLURIBUS UNUM”, the year of issuance, and the mint mark.

The circulation release date for the the Franklin Pierce Presidential Dollar is scheduled for May 20, 2010. The coin is or will be available from the U.S. Mint in the following numismatic products:

Unmixed quantities of Franklin Pierce Presidential Dollars can also be ordered by financial institutions with direct accounts with the Federal Reserve. A special ordering period has been established from April 29 to June 3, 2010. Boxes of wrapped rolls containing $1,000 face value in coins may be ordered during this period. Special requests for $2,000 bags of unmixed Franklin Pierce Dollars will also be accepted.

The United States Mint plans to hold a launch ceremony for the coin on May 20, 2010 at 10:00 AM ET on the grounds of Pierce Manse, the former president’s historic family home in Concord, New Hampshire. The event will be attended by Andrew Brunhart, Deputy Director of the United States Mint; James F. Birge, President of Franklin Pierce University; and Peter Wallner, Library Director of the New Hampshire Historical Society. The event is also open to the public and news media.